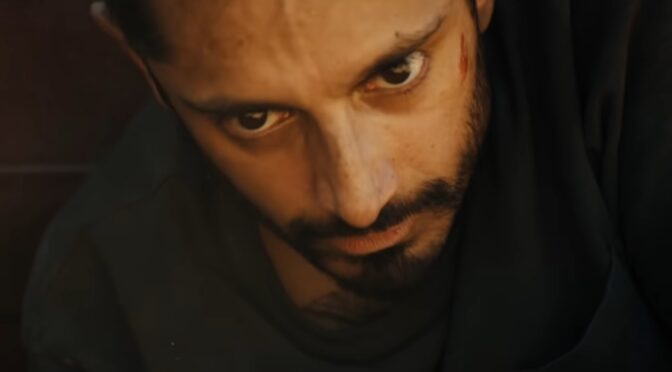 Michael Pearce’s second feature film continues Riz Ahmed’s rise and is a tense and superbly paranoid story. ENCOUNTER can’t quite figure out the smoothest progression of that story, but the film’s construction and location choices make for an engaging thriller.

We open with Malik Khan (Riz Ahmed), preparing for an alien invasion that is taking hold via insects and small creatures, infecting humans with parasites. After two years away, the former marine takes off with his two young sons, hitherto living with their mother and stepfather, to save them from this microscopic threat. As he takes off across the USA, Malik is pursued by the FBI while those around him are sceptical about his claims.

Riz Ahmed’s meteoric rise is unlikely to be given further energy by ENCOUNTER, but it serves to remind us of his commanding screen presence. His twitchy and wide-eyed performance is the heart of the film; a frenetic bundle of paranoia, Ahmed has pitched the performance just right to blend with the atmosphere created by Pearce’s direction.

“[Riz Ahmed’s] twitchy and wide-eyed performance is the heart of the film; a frenetic bundle of paranoia, he has pitched the performance just right to blend with the atmosphere created by Pearce’s direction.”

The film consistently has an eye for the most unsettling augmentation of the central character’s fears. In the early stages, close-ups of – otherwise terrestrial – bugs look inherently alien. The use of visual effects in creepy interior locations is intelligently sparing, generating enough revulsion to set the atmosphere without leaning too hard into the imagery. Malik’s claims have a root that the film resounds from classic sci-fi, with several notable touchstones. However, the general tone and atmosphere owe much to earth-bound psychological thrillers that blend objective reality with subjective perception (helped along here with more stellar musical work from MACBETH and TRUE HISTORY OF THE KELLY GANG composer Jed Kurzel).

This restraint and clarity of perspective become critical later in the film when the narrative loses ambiguity around Malik’s fears. At this point, the removal of dramatic uncertainty changes the type of film ENCOUNTER is. The script handles this a little inelegantly – via some clunky expository dialogue – and whether viewers go with that shift depends on whether they engage with the film it then becomes.

“The script handles this [narrative shift] a little inelegantly – via some clunky expository dialogue – and whether viewers go with that shift depends on whether they engage with the film it then becomes.”

Although maybe not quite what was advertised on the tin, that new dynamic leads to a more interesting role for Aditya Geddada and Lucian-River Chauhan as Malik’s children. In particular, as the elder of the pair, Chauhan is excellent at balancing fondness and devotion to his father with increasing scepticism at his state of mind. The dynamic between adoring children and the slow realisation of their father’s fallibility is a beautifully compressed expression of the juvenile journey to independence.

It also feels deliberate that the film begins to focus its scenes during these segments in what looks like the dishevelled, forgotten dustbowls of America. Pairing this with the first segment’s paranoia gives a politically pointed contrast: Malik’s journey begins as one of paranoia and external threat, but as we progress into the gravelly expanses of the USA, the issue turns more into one of societal failure (and the fallout around his family).

Although there is an awkward seam in the middle of ENCOUNTER, there are several layers – varying from personal to societal in scale – with which to engage. That awkward transition, combined with a plurality of readings, could indicate a messy and unfocused story, but Ahmed’s performance and the consistent tone created by Pearce ensure ENCOUNTER remains a captivating experience.