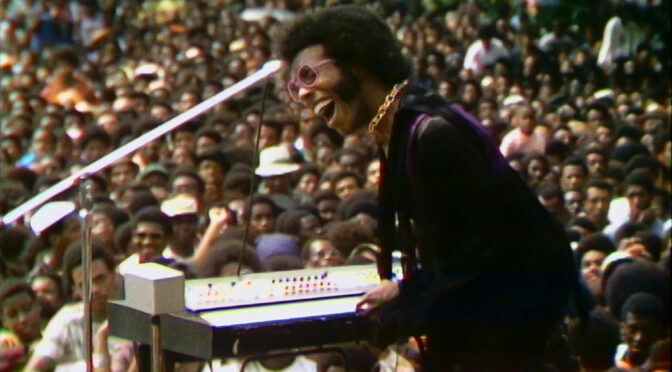 In the sultry summer of 1969, Mt. Morris Park (now Marcus Garvey Park) in Harlem, New York City, was home to the Harlem Cultural Festival, comprising six weekends of live concerts that drew nearly 300,000 people. The performers, like the audience, were mostly Black, and together the set-list amounts to a who’s-who of musical greatness in the late 1960s in its many varieties: Motown and pop acts shared the stage with soul and gospel singers; jazz-inflected performances made way for men and women of the blues; Afro-Cuban percussion segued into Nina Simone’s piano. The concerts were recorded and filmed, but the Harlem Cultural Festival had the great misfortune of taking place in the same year as another festival, located just less than a hundred miles away in White Lake, New York, which vacuumed the historical attention: Woodstock. PR-savvy organisers took to calling the Harlem gigs “Black Woodstock,” but the footage lingered out of sight for many years, gathering dust in someone’s basement.

With SUMMER OF SOUL Ahmir “Questlove” Thompson stages an intervention, bringing the footage together with those who were in attendance or performing in it, extrapolating a wider cultural history from this neglected document. Joyous performances are seen for the most part in snippets, sometimes in longer stretches, intercut with shots of the crowd. From there, Questlove cedes the floor to his interviewees, who tell of the atmosphere, the heat, and their joy at watching Stevie Wonder, Mahalia Jackson, Sly and the Family Stone, among many others, perform. (The director himself is a skilled communicator about music and regularly appears as a talking head in music documentaries such as MR. DYNAMITE, on the life and career of James Brown: an expertise self-satirised in POPSTAR: NEVER STOP NEVER STOPPING.) There are two set-ups for the talking heads: one has them speak to the director off-camera, a standard camera position for a music documentary; the other has them watch a monitor on which the footage plays, the screen lighting up their eyes and glasses. These moments create a sense of the celebratory glow of the occasion, and in the reemergence of the recording. “To us,” one attendee remarks, “Harlem was Camelot.”

Questlove uses the acts as points of entry into a set of intertwined histories: a history of the festival itself; a history of Black cultural expression and politics (when the
NYPD failed to offer security, the Black Panther Party provided guards); a municipal history of Harlem; and a history of America in the 1960s. In the last of these, the seams begin to show. The rapid contextualising montages (related in illustrated maps, photographs and news footage among other archival materials) move too quickly, racing through a spate of political assassinations (JFK, Malcolm X, Dr King, Robert Kennedy), the fervour against the war in Vietnam, and Black rebellion against the indifference of politicians and the racism of the police (especially during the riots following King’s assassination in 1968). The joins the director finds in and through this material are intuitive — but the sequences themselves are more than slightly rushed.

But when the film slows down to let one of the acts do its work – or allows one of the interviewees to reflect – the cultural and cinematic stature of Questlove’s lovely film becomes clear. When Nina Simone or Gladys Knights and the Pips or B.B. King takes the stage it’s hard not to think of the euphoria of James Brown’s astounding sixteen-minute set in THE T.A.M.I. SHOW, except here there are no floppy-haired English bands, riding the wave of the British Invasion, plagiarising Chuck Berry’s style in front of a majority-white audience to occupy the same stage. And when Mahalia Jackson and Mavis Staples perform “Precious Lord, Take My Hand,” passing the microphone back and forth in an act of mutual accommodation and encouragement, each aiding the other’s voice to unnatural depth and resonance, compare it to what Aretha Franklin’s sweeter voice does with the same song in AMAZING GRACE, another reconstructed document of Black American musical history. SUMMER OF SOUL assumes a natural position alongside a group of the essential American music documentaries.