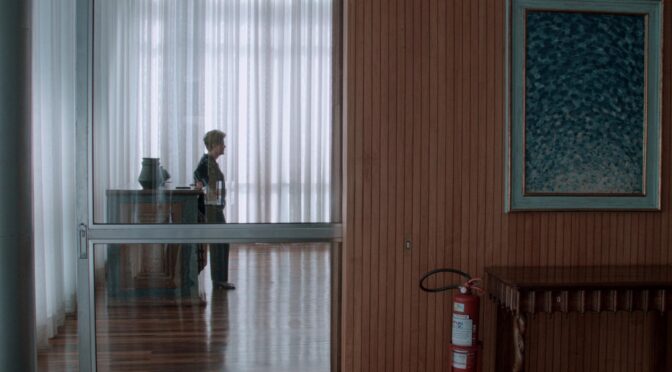 In THE EDGE OF DEMOCRACY, director Petra Costa’s camera flows through the sleek and spacious rooms of the Palácio da Alvorada, Brazil’s presidential residence designed by modernist architect Oscar Niemeyer, in slow travelling shots. As the camera traipses around the empty, noiseless halls and doorways, it becomes clear that the stillness and quietude of these shots is a counterpoint to the tumultuous political period being surveyed. The same subject, the expedient impeachment of president Dilma Rousseff on trumped-up charges, though not panoramic in view like THE EDGE OF DEMOCRACY, is taken up by Maria Augusta Ramos’s THE TRIAL, which concerns itself with documenting the painstaking, though ultimately doomed to fail, work of the president’s defence team.

ALVORADA assumes another position from which to view this pivotal moment in recent Brazilian politics. Directors Anna Muylaert and Lô Politi have less access than Costa and Ramos do in their films. However, they still find time to follow and interview Rousseff, whose level-headedness about the motives of those driving the impeachment is apparent in each conversation, alongside members of her staff. And though they privilege Rousseff’s perspective and provide a first-hand glimpse of many key incidents in the run-up to her departure, she is not the sole focus. The running of the palace is viewed in the round, and the camera sits in on a host of meetings and quotidian tasks, from administrative work to janitorial, from maintenance to the kitchens, from personal assistants to security, and from visits by Rousseff’s friend and predecessor as president, Lula, and musician Chico Buarque, the directors’ cameras catch it all.

Where Costa’s film is choreographed in elegant camera movements using top-of-the-line technology, there’s something pleasingly lower-grade and furtive about the form of Muylaert and Politi’s film, their hand-held digital camera bobbing and weaving to find its place, combing the room for visual detail, its microphone crackly and muted, ready for any eventuality. The use of zoomed-in close-ups is telling, too: it’s a way of pretending to be closer than the directors actually are to the subjects of their film, a thought made literal in the occasional instances in which Rousseff asks the cameras to leave the room.

As the impeachment of Rousseff, the first woman to serve as president in Brazil’s history, draws nearer, a coiled tension becomes apparent in many aspects of the palace. But Rousseff remains calm, keen to think through the connections of culture to politics. She animatedly draws a line from John Milton’s Satan to her current predicament, before course-correcting, because, she says, her accusers are not evil, just banal. Discussing the writer Machado de Assis side-winds into a consideration of Brazil’s long history of slavery, and Rousseff remarks that this is crucial to understand the mentality and superiority complex of the country’s political elite. Her comments take on a new emphasis in the context of Jair Bolsonaro’s presidency, a connection underlined by the fact that his voice opens the film.

Come the day of Rousseff’s defence to the Senate, the cameras stay in Alvorada, watching staff work while TVs in the corner or the centre of the frame bear the image of their boss engaging in a rebuttal of political indignities. The editing drifts through the palace’s rooms, which Rousseff herself deems not to be a living space (such is its ornamental splendour), the mood darkening in each of them. In her private quarters, an assistant is watching in an adjacent room, while the camera centres a chest of drawers on which a framed photograph rests. It’s a famous image. In it, Rousseff, who was imprisoned and tortured during the military regime, sits in front of a panel of generals: she looks round, defiant; the generals cover their faces before the camera’s lens. To single out this photograph as a parallel to her current accusers, some of whom invoke the very generals who sanctioned her torture, is a rhetorically astute juxtaposition.

The final stretch of ALVORADA succumbs to a gluttony of symbolism, where each attempt to isolate an expressive visual fact within the frame looks like it’s trying too hard. There’s more than enough emotion to register in the moments of Rousseff’s farewell, her vacating what has been her home since 2011, than in the directors’ attempts to make a figurative detail of her departure. Her impeachment, the handing of the reins to Michel Temer and thereafter Bolsonaro, can be seen in a wider context of the swing towards regressive politics the world over: the election of the BJP in India; the UK’s Brexit; Trump’s election in the US. But these three documentaries, THE TRIAL, THE EDGE OF DEMOCRACY, and now ALVORADA, with their differing angles of approach, make the case to see the specific circumstances of Brazil’s recent political history. In tandem, they paint an agonising portrait.