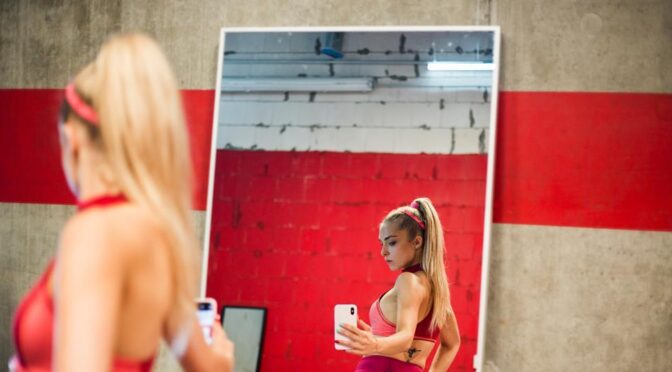 Magnus von Horn’s SWEAT fuses the age-old story arc of the battle between success and loneliness in a modern setting that resonates in the digital age. Horn, above all, paints the 4G world on a three-dimensional canvas, allowing human nature to take the spotlight in a setting that is often illuminated to promote the shallowness of humanity.

Sylwia Zajac is a high profile health and lifestyle personality who has made a name for herself as the promoter of fitness and wellbeing. She spends her days teaching workout routines to onlookers in shopping centres, vlogging her warm-ups, shake recipes, and sending messages to her fans until her facade starts to crack on-screen and in her daily life. While Sylwia has become a role model for the young and old, she finds it increasingly difficult to keep up appearances as her unhappiness in her personal life makes her question whether or not she should continue down the career path she has built.

Horn has managed to craft a compelling script that flows smoothly into transitional cinema. The Sylwia we meet at the beginning of the film is exceedingly changed by the end. The drifting narrative accommodates the emotive fluctuations of Sylwia’s sense of self and her gradual acceptance of the image of perfectionism as that of something unobtainable at best and sacrificial at worst. There are a lot of interesting topics surrounding increased net presence that Horn manages to discuss within the characterisation of Sylwia: the reliance on media to promote your brand is created to isolate you from your image; the impossibility of making a life outside of the one you have made online without empirical collision; the illusion of liberation when persona precedes self. Without directly answering the conflicts of social media’s peaks and pitfalls, Horn places the make or break aspect of online success in the same realm of possibility – and highlights the idea that both can happen equally and simultaneously.

SWEAT manages to capture mental health issues in an era revolving around social media in a very delicate way, with moments of Sylwia’s vulnerability flashing from beneath the shadows of her unparalleled determination to succeed. There is a scene where Sylwia is stopped by a fan at a shopping centre, who then begins to share intimate details of her life following a sudden miscarriage. After the woman bares her sores, Sylwia opens up about her troubles with her image and job and confesses that she often contemplates giving it all up and deactivating her accounts. While there are many other moments in the narrative that make you pause for thought, it embraces the notion of one of the most puzzling and real concepts of human life: it can be more comforting to share your deepest feelings with an unbiased stranger than those who are closest to you.

Magdalena Kolesnik’s performance is well-rounded, managing to evoke the dynamic side of Sylwia’s quest for greatness and her quiet melancholy for the parts of her life she is unsure how to fill, in a serene symphony of raw emotion and pensive stillness. Kolesnik manages to channel the shallow, self-serving and naive properties of Sylwia in a way that feeds back to the core struggles and difficulties that breed the unsavoury elements of her behaviour. There is never a point in the film that detaches you from Sylwia, and Kolesnik is careful to remind the audience that the imperfections of Sylwia exist within us all, surviving through life’s erratic obstacles, waiting intently at the sidelines to activate them.

SWEAT is an impressive feature that does well to remain innately character-driven in a script centred around the idea of pseudo-realities. With careful, meditative and heartfelt writing, Horn’s themes at the centre of the screenplay invite a universal audience into the discussion, with room for viewers to develop their own insights into Horn’s intellectual re-telling of the age of media.