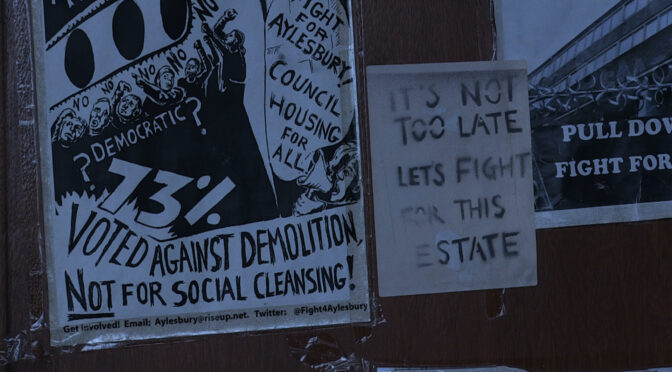 WE’RE STILL HERE, directed by Melissa Herman, illustrates the harsh reality being experienced by many people living in social housing.

Through its cinematography and interviews documenting numerous campaigns against poor treatment of residents, viewers are invited to learn about a variety of issues faced by renters of council housing in London, in an unapologetically informative film. We learn about social cleansing – the way that longer-standing tenants are removed and replaced with temporary ones – and how temporary tenants can be evicted with little notice.

The way that WE’RE STILL HERE guides its viewers through the lives of its subjects, taking the time to elaborate upon key terms and spending moments introducing the story of housing residents, is particularly effective. This factor assists in injecting personality into its participants, using many interviews of people in similar circumstances to each other, across many age groups and ethnicities. Each person is represented as entirely their own, not as an embodiment of their problem. Viewers are not shown a shadow overtaken by societal stereotypes or misinformed stigma; they are shown people fighting for what they deserve. We learn about their lives and desires for change, whether that is bringing a family back together or to rally a community of campaigners before the council.

Aysen is one of many citizens shown during the film, a great addition to it. She lives in a London flat owned by a housing association and does her best to remain grateful. Despite her precarious situation (her home is under constant threat of demolition), she adores the view from her window over the city and of the London Eye. Her voice felt warm and approachable and provided positives irrespective of her struggle. It induces that bit more anger seeing her gratitude: how could the council attempt to take her home away? We are presented with a woman making the most out of the little that she has, and we are left merely as spectators.

After seeing the film’s community band together protesting against demolition threats, surprise rent increases and benefit discriminations, we are expected to do something. Regardless of whether a viewer is newly informed of the depths of these social housing issues, they will be presented with a collective voice who will convey an improved understanding of injustice. It’s impossible to leave this film without feeling self-reflective – reflecting upon your own life and position. It’s inevitable that WE’RE STILL HERE will leave you wanting to grab some campaign boards and join in on the wave of activism.

WE’RE STILL HERE is screening at Document Human Rights Film Festival online from January 25th-30th. There is a free live Q&A with director Melissa Herman on Saturday, 30th January, at 1pm, on Zoom. To find out more and register, visit the Document website.