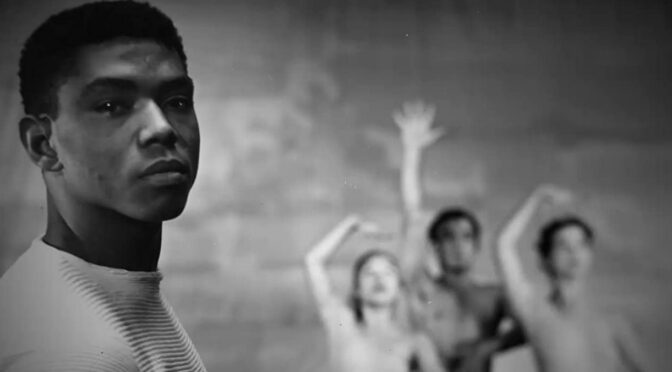 Dance and film have been happy companions since the latter medium’s earliest days. The joys of movement and details of performance are magnified by the camera, giving audiences the best seat in the house. In documentary form, film grants audiences an even closer seat than usual to the artistic and creative process, immersing viewers in the sweaty pursuit of perfection.

AILEY, the latest feature-length documentary from director Jamila Wignot, grows fluidly from this movement. The film opens on a dance rehearsal, rigorous discovery and repetitive practice preceding performance, moves replicated and refined until ingrained in the bodies of each dancer. AILEY continually returns to the creative process even as it melds performance, archival footage, and interviews to celebrate and interrogate the life and work of revolutionary choreographer Alvin Ailey. His Alvin Ailey American Dance Theater (AAADT), founded in 1958, broke boundaries in Black dance and choreography in the United States and continues to foster and showcase Black talent today.

Just as the vast majority of dance develops in the unseen and unglamorous, AILEY is interested in the impulses behind creation over the finished product. Rehearsal studio footage is often presented with no commentary, while news clips and interviews from Ailey’s collaborators, performers, and friends overlay footage from performances. The effect highlights the work and effort behind seemingly natural talent, emphasising Ailey’s deliberateness in overly-politicised themes and techniques that he fostered with his dancers. Wignot and her interviewees also never lose sight of the fractious, racist reality and unrealised “American Dream” against which Ailey created his productions; it is too easy with time to remember his groundbreaking work and forget the circumstances of its creation, and AILEY ensures its relevance then – and today – stays at the forefront.

Starting from the dance, and letting the dance speak for itself, is a powerful move when investigating Ailey’s intensely guarded private life. Wignot and her interviewees are clearly keen to protect the privacy of the deceased and do not reveal anything that had not been shared previously by Ailey himself. While a shadow portrait emerges behind the respectful, reverent-yet-not-hagiographic picture on the screen, the move is based in dignity. The compilation of reams of archival footage, much captured and shared previously by Ailey and his family, illuminates the dire economic and social conditions of his upbringing and Black American life without dwelling unduly on trauma.

AILEY is a loving look at a dance pioneer, meticulously thorough in its content yet never losing the joy, rage, and striving for excellence that characterised Ailey and generations of his disciples at the AAADT. Thoroughly engrossing and historically rich, its wealth of dance footage is a compendiary account for aficionados and an unparalleled introduction for newcomers.