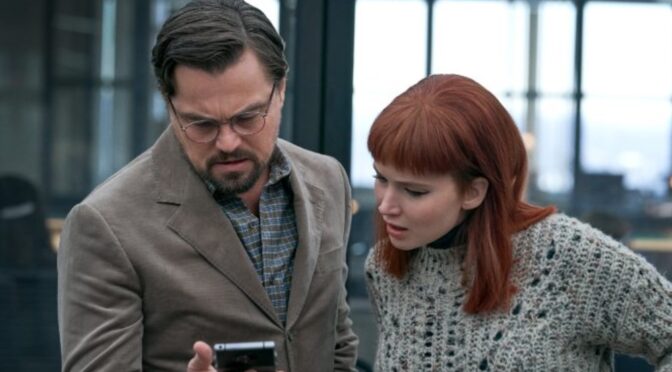 The contemporary political climate in the USA is often said to be beyond parody or satire. The broad and bludgeoning beats of DON’T LOOK UP would seem to confirm it is at least beyond Adam McKay’s latest star-filled attempt. Although the film is undoubtedly sharper than his previous political feature, VICE, the same smugness and cocksure piety blunt the more incisive moments, just as many performances are pitched more for caricature than satire.

After graduate student Kate Dibiasky (Jennifer Lawrence) discovers a comet on a collision course with Earth, she and her colleague Randall Mindy (Leonardo DiCaprio) must convince the US government and public to take the threat seriously. In the face of a divided public, indifferent media, tech moguls with messiah complexes, and our protagonists’ vices, it proves difficult to do so. An enormous cast presents plenty of opportunities to send up the shallowness, apathy, or selfishness of those in power, as well some sideswipes at the malleable public and hypocritical undertones of some armchair activists.

Although not as disjointed as VICE, the comedic blunderbuss of a script is frequently too scattershot to develop a meaningful impact with its barbs. For instance, the film simultaneously tries to target superficial news media and the malleability of the public mindset to conspiracy theories, letting the former somewhat off the hook. In addition, the involvement of Mark Rylance’s tech leader – a bizarrely performed blend of Jobs, Musk, Zuckerberg, and Bezos, amongst others – and his capitalist impulses further dilute the scorn the film can muster up.

The lead performers keep the film engaging, and Lawrence, in particular, is effective as the audience’s route into the events. Her delivery when Dibiasky reaches the end of her tether – on multiple occasions – gives an amusing edge to her anger at the idiots surrounding her. However, many of the other performances are more bludgeoning. Jonah Hill’s nepotistically installed Chief of Staff is, if anything, less annoying than Trump’s actual progeny. Rylance’s tech CEO is so indistinctly ‘odd’ it does very little to see his Machiavellian manoeuvres later. Meryl Streep’s Trumpian President, the most prominent political figure, is so broadly sketched that the exaggeration goes beyond satire and into sketch comedy.

“…the film’s questionable metaphors aren’t as illuminating and clear as the righteous rage permeating the script would imply.”

Beyond this, the film’s questionable metaphors aren’t as illuminating and clear as the righteous rage permeating the script would imply. The disaster presented to us in the film is – despite the time lag until the comet is visible from Earth – a poor cypher for the near-invisible slow-motion car crash of climate change. The degree of reckoning required as a species for a typical Roland Emmerich plot device does not transpose easily to one that was decades in the making and doesn’t map as neatly onto the duelling partisan Don’t Look Up/Just Look Up movements the film creates.

DON’T LOOK UP is a funny if patchy affair overall, so it would be unfair to say that some of the better jokes don’t raise a chuckle. However, it picks questionable subjects to emphasise in creating its satire. The current decade’s conspiracy theorists and idle social media activism require little to no exaggeration to highlight their absurdity. Doing so to the extent seen here results in vindictive and smug portraits rather than allowing characters to hang themselves with their own rope. In this regard, the film’s presentation of a complicit media machine (especially one segment at a New York Times stand-in supposedly sympathetic to Dibiasky and Mindy’s objectives) is much more successful, with the bubbly TV bobbleheads played by Cate Blanchett and Tyler Perry pairing wonderfully with Lawrence’s mystified and frustrated academic.

McKay’s involvement with Succession is as an executive producer rather than direct creative input, so it is perhaps too much to ask for showrunner Jesse Armstrong’s experience as a writer on The Thick of It and Veep to have rubbed off since that show’s premiere. Nevertheless, it is frustrating to see the film resort to smug caricatures more at home on Saturday Night Live when McKay’s own list of credits – chiefly THE BIG SHORT – shows broadly-targeted comedy can be smart as well as accessible. Although the best satire features many of the elements DON’T LOOK UP possesses, it also tends to resemble reality somehow. However, the characters here (until some much-needed reflective moments are introduced in the film’s final few scenes) can exist nowhere but within the lines of the screenplay.

“…it is frustrating to see the film resort to smug caricatures more at home on Saturday Night Live when McKay’s own list of credits – chiefly THE BIG SHORT – shows broadly-targeted comedy can be smart as well as accessible.”

The film merely invites people to laugh at idiots being idiots – which can undoubtedly be cathartic – but presents itself as thought-provoking or insightful. The lens here is also painfully US-centric (save for some scant faceless nods towards other nations intervening) and the viewpoint devoid of the empathy that needs to be fostered to address challenges hypothesised in the film. DON’T LOOK UP pitches itself as holding up a mirror to the world’s apathy and hypocrisy, but the execution is more pointing at and mocking idiots. It might give us a brief laugh, but we’ll all get hit by the same comet in the end.