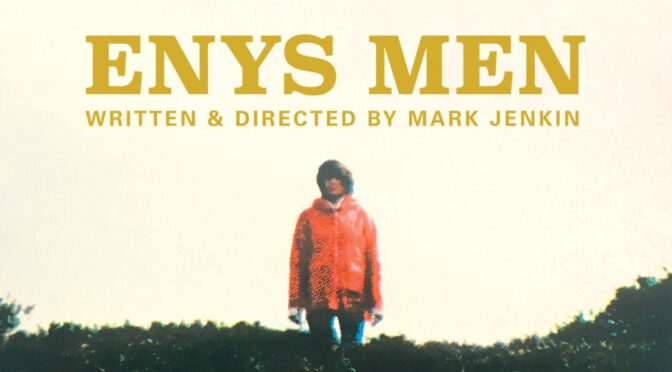 Mark Jenkin’s eagerly awaited feature-length follow-up to critically acclaimed debut BAIT swaps out his previous effort’s black and white 16mm film for a more colourful aesthetic. An exercise in endurance, ENYS MEN is a vibrant 1970s-inspired experimental horror that makes inventive use of a sparse natural landscape and unconventional form to unsettle and isolate its audience.

Enys Men is the name of the fictional remote Cornish coastal island in which we find The Volunteer (Mary Woodvine). Isolated and wind-beaten, we join The Volunteer alone on Enys Men and are never explicitly made aware of what she is doing there. Instead, we follow her actions as she traverses the terrain and records daily changes in the patterning of the wildflowers that line the desolate clifftop. Much like Chantal Akerman’s slow cinema classic JEANNE DIELMAN, 23, QUAI DU COMMERCE, BRUXELLES, we observe and come to know patterns of behaviour in both The Volunteer and the environment through the use of long takes and repeated imagery. Through repetition and extended shots, Jenkin invites us to understand and endure the passing of time and paranoia that The Volunteer’s isolation induces within our own bodies. Long static shots encourage us to notice slight but significant changes as things begin to unravel and hauntingly surreal occurrences creep into the space.

“ENYS MEN’s location and the year of its setting, 1973, will undoubtedly recall horror classics THE WICKER MAN and DON’T LOOK NOW [but] ENYS MEN is arguably even more disquieting than those films.”

As in BAIT, Jenkin has shot ENYS MEN with a hand-cranked 16mm Bolex camera. This approach creates beautifully textured and vibrant imagery that is incredibly pleasing to the eye and allows for an unnerving sense that what is being shown is found footage from another time. ENYS MEN’s location and the year of its setting, 1973, will undoubtedly recall horror classics THE WICKER MAN and DON’T LOOK NOW, particularly when you see the protagonist traverse the remote island in her bright red coat. However, ENYS MEN is arguably even more disquieting than these films. The primary colour palette that Jenkin uses, paired with the high-pitched ambient soundscapes that he has constructed under his imagery, creates an unsettling weirdness reminiscent perhaps more specifically of frightening public information films of the 1970s.

Jenkin masterfully uses the film’s form to frighten, utilising the post-synch sound forced by shooting on a Bolex camera to heighten ENYS MEN’s oddness. The use of asynchronistic sound creates a surreal eeriness and uncertainty that emphasises the unsettling uncanniness of the dramatic action when it arrives. ENYS MEN is undoubtedly a strange place to inhabit: you must give yourself to its changing tides, but it is an inventive and incredibly rewarding experience that will haunt you long after the projector stops rolling.

ENYS MEN has been picked up for distribution in the UK and Ireland by the BFI.