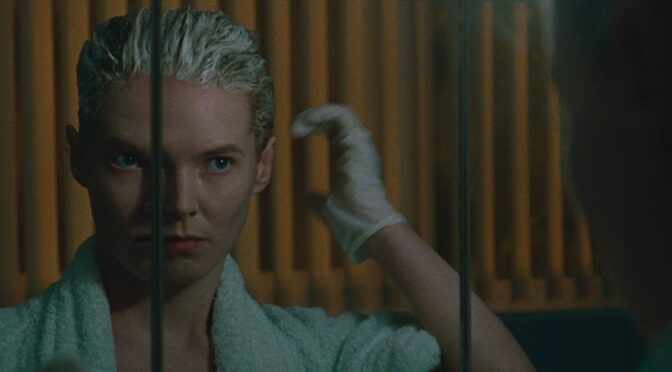 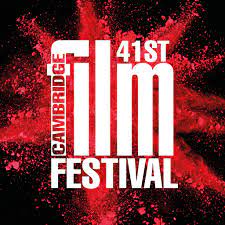 There is a central idea between the dramatic unfoldings of BLUE JEAN: internalised homophobia triggers a fight or flight response. Walter Bradford Cannon’s famous ‘fight or flight’ theory, otherwise known as Acute Stress Response, is referenced early in Georgia Oakley’s outstanding feature debut. In BLUE JEAN, the stress Oakley’s Geordie protagonist Jean responds to is that of Margaret Thatcher’s homophobic amendment to British Law: Section 28. Clause 2A, informally known as Section 28, was added in 1988 to the Local Government Act 1986, which prevented the teaching and promotion of homosexuality, declaring that same-sex relationships were “a pretended family relationship”. Defenders stated that Section 28 is to ‘protect the kids’. Such rhetoric continues to be used to this day (by predominantly white cis heterosexuals) to defend their homophobia, transphobia and general bigotry. Oakley’s film invites us to reflect on this horrible past through the eyes of a victim, as her film’s narrative is all too relevant for modern times, where bigoted trojan horses continue, such as the exclusion of transgender people from the UK ban on conversion therapy.

BLUE JEAN follows Jean (Rosy McEwen), a bleached blonde David Bowie-esque lesbian P.E teacher in Tyneside High School during the months after the government passed Section 28. Her comfortable (and very northern) existence of cup’o’noodles, pints and pyjama nights with her girlfriend is challenged by the acidic vitriol of a Thatcherite society and the appearance of one of her students Lois (Lucy Halliday) in the gay bar she frequents. Being outed to her colleagues by a student would mean that, because of Section 28, they would be in their legal rights to strip Jean of her job. Oakley deftly follows this thread to highlight the internalised homophobia society conditions people with as Jean retreats into the heteronormative events to which her colleagues incessantly invite her. Her actions are that of ‘flight’, juxtaposed with her queer-coded girlfriend Viv (Kerrie Hayes), who outwardly peacocks her sexuality with crude gestures and a butch persona. Viv is ready to fight: for Jean, for her sexual liberation and for the freedom she deserves. For Jean, however, same-gender relationships had already been tabooed long before Section 28 was enforced, forcing her into ’flight’.

“Oakley deftly [highlights] the internalised homophobia society conditions people with as Jean retreats into the heteronormative events to which her colleagues incessantly invite her. “

Others assume Jean’s sexuality is heterosexual, and her marriage and subsequent divorce from a man are subtly weaponised against her at every turn by colleagues who make snide comments about her lack of social life. Of course, Jean isn’t lacking socially. She is spending her time drinking and playing pool in a gay bar instead of the hyper-hetero hive to which her colleagues invite her. The gay bar is a space that is free from heterosexual norms. She can feel liberated amongst her lesbian conclave in one of the few settings for BLUE JEAN where Jean actively seems comfortable. The micro-aggressions she’s free from within the bar are not just from the heterosexual people whom Jean considers friends. Her neighbours stare at her: with her hair which doesn’t conform to gender roles, and her baggy unfeminine tracksuits, she is never truly welcome. These neighbours never speak up about their bigotry, but Oakley shrewdly captures their simmering hatred beneath the surface.

Even Jean’s sister, Paula (Lainey Shaw), goes on to show how performative her allyship and ambivalently positive attitude to Jean’s sexuality are. She allegedly supports Jean’s way of life but not around her young son Sammy. When Jean challenges that idea, Paula becomes defensive. It is an idea that Oakley navigates perfectly, that everyone in this society – and laterally into modern society – is happy to support ‘the gays’ as long as LGBTQ+ members stay on the fringes of the cultural zeitgeist and don’t impose their sexuality onto everyone else. One has to look at the fallout – or lack thereof – from the ‘One Love’ armbands abandoned by European countries for their matches at the 2022 World Cup in Qatar (a nation that continues to enforce its extensive version of Section 28). Modern LGBTQ+ ‘pride’ is now as performative and hypocritical as Paula is in BLUE JEAN. However, challenging it would upset a status quo in a society whose homophobia is deeply ingrained from media output.

Such media is shown in BLUE JEAN, with the introduction of the Saturday night TV show Blind Date. The show – centred around opposite-sex relationships – was prime TV and a prominent component of water-cooler discussion in the UK in 1988. You were diluted out of those conversations if you weren’t watching it. While a modern observer should not believe Blind Date and its intentions to have been malicious, it only serves to imply further that anything but heterosexuality is not for mainstream media. For a more contemporary example, the immensely popular show Love Island, shown on the same channel as Blind Date once was, invites comparison by extrapolating the straight framework of the older show. The creators behind Love Island have come under fire for the heteronormativity of the show but remain firm that the format – one of relationships forming and reforming – “…doesn’t really allow it.”. Media is once again culling LGBTQ+ chances of being a subject of the important water cooler chat. The inclusion of Blind Date within Oakley’s wonderful and astute script strongly signifies what Oakley is saying about the subtle reinforcement of heteronormative values. The teachers at the school Jean works at say, “What of the children?”. As a staple of weekends in northern households, including that of Jean and Viv, Blind Date was a family event. BLUE JEAN clips an episode where a contestant states, “I like my women to be feminine!” – one which young, impressionable children would have seen. The small moment shows that the growing epidemic of hatred against the norm, then permitted by Section 28, didn’t just start with heteronormative media but has been buoyed by it. What of the children, indeed?

“The inclusion of Blind Date within Oakley’s wonderful and astute script strongly signifies what Oakley is saying about the subtle reinforcement of heteronormative values.”

As Jean finds herself torn between ‘fight’ or ‘flight,’ she must choose what matters most to her. Having become the bridge between the disparate identities that Jean struggles to keep separate, Lois becomes wrapped up in the homophobic struggles that LGBTQ+ teenagers face. Under the stress of Section 28 and the subtle aggressors that marginalised women encounter, Jean acts in her best interest. In doing so, she is forced to confront her morality. “What kind of role model are you being to her?” is spat out by Viv when Jean mentions the desperate actions she took mid-flight to save herself rather than the future of 15-year-old Lois.

Having been loosely inspired by the true story of Catherine Lee, now a professor at Anglia Ruskin University, real people are at the heart of this story. In a Q&A with producer Hélène Sifre and Professor Lee at Arts Picturehouse during Cambridge Film Festival, Lee mentions her sadness over the person who represents Lois and how she failed her. Lee stated that she did not feel like she could prevent what happened to the real-life Lois back in 1988 and praises BLUE JEAN on the authenticity of how Oakley captures this story of internalised homophobia.

Professor Lee, however, was not located in Tyneside in 1988. In a bout of creative liberty, Oakley uses Tyneside in North-East England – and its lack of gentrification compared to London – as an entry point to display society’s lack of progress since 1988. It is a decision that could be seen as insulting to those people, but Oakley, with producer Sifre, interviewed LGBTQ+ teachers anonymously in the North-East who remain to this day afraid of coming out. Spending one evening out in the North-East, visually presenting as LGBTQ+, will receive looks of derision from people who outwardly seem like the normal, friendly northerners stereotypically presented. This disconnect is no better highlighted than in a recent interaction between this writer and a student of Teesside University – a recipient of Stonewall UK’s ‘Silver’ award for LGBT inclusivity – who was raised in the environment BLUE JEAN condemns. They declared they would no longer let their child watch a popular animated TV show aimed at children because a lead female character had been written to have a queer relationship. Such an example runs counter to the media’s tendency to frame students at large as predominantly ‘woke’ and inclusive. Known contrarian Piers Morgan wrote an article in June 2022 citing that ‘woke’ students need to ‘grow a pair’, while Ricky Gervais, whose show After Life broke Netflix records, gave an interview to NME in October 2021 stating he “want[s] to see ‘woke’ young people get called out by next generation”. Suella Braverman, home secretary in Rishi Sunak’s Conservative UK government, is promoting the very culture war that BLUE JEAN discusses, with her comments regarding anyone who tackles the media heteronormativity as “tofu-eating wokerati”. So while Braverman, Gervais, Morgan and others (mostly white-cis-heteronormative people) within media peddle their vitriol, there are North-East students who would deem as ‘woke’ still living with the same ideologies that Section 28 presented to their parents. That these principles remain present in North-East culture nearly two decades after Section 28 was annulled makes Oakley’s decision to set this in 1988 Tyneside an inspired one and a call for present-day society to tackle their own internalised homophobia.

One of Oakley’s best creative decisions with BLUE JEAN was to shoot on 16mm film even if, in the Q&A, Hélène Sifre amusingly moans about the logistical nightmare that was shooting on film. The 16mm photography from cinematographer Victor Seguin adds a textured grain to the film, sending audience members right back to the smoky pub aesthetic of the 1980s. It is helped by some wonderful production design, perfectly chosen anachronisms, and a banging 1980s soundtrack. Praise should also be handed to Oakley’s finely curated, concise and often jocular script, which never lets the film become the melodramatic soap opera it easily could have been. BLUE JEAN has such a spotlight on the character of Jean – McEwen is on screen for nearly the entire runtime – that even when it threatens to become blindingly angry at how she is being treated, it’s refreshing to see a film keep itself grounded. The film is honed in on a complicated character just wanting to live their beans-on-toast life like everyone else.

BLUE JEAN is a chilling, angry indictment of a government that infringed its bigotry onto a society that was all too ready to accept it while being a bitingly brilliant character study about self-acceptance and queer identity. Oakley’s incredible debut expertly manages to hold a mirror up to society’s continued failings through the lens of a victim falling prey to the internalised homophobia that is prevalent in the very fabric of our lives. Led by a hypnotic Rosy McEwen, this unostentatious drama has the courage to choose ’fight’ in the war against hatred.

One thought on “Blue Jean and media-reinforced heteronormativity”