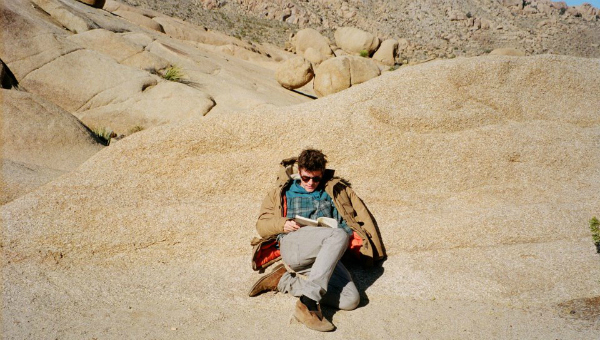 Lovers of Bacon, Bergman and John Cage will deeply appreciate Max Weinman’s APSIS. A crow-like figure darts across a vast and sensual sandscape, which rolls and ripples like a slumbering giant. Screams and hollers mix with myriad percussion instruments, as hands and faces float and grimace across a velvety void. In preparation for this sensual and visceral piece, Weinman undertook extensive research into the occult, specifically the idea of the Incubus: the male incarnation of the nightmare that stalks females in their sleep. Hypnotic and seductive, APSIS is a gloriously ghastly commentary on wanderlust and an open world unavailable past the skyline horizon.

Rosy Hunt: When did you first begin to experiment with filmmaking?

Max Weinman: I started filming my surroundings when I was thirteen or fourteen—I amassed some 90 hours of footage over four years of high school—but there wasn’t any intention of editing the material until I went to Bard College in upstate New York. There, I realized this free-wielding observational approach to filmmaking and its long history in the American avant-garde. From this realisation, and the countless films I watched while at Bard, I began to edit new footage and make diary films. APSIS strays heavily from my other works, but it was motivated by the same fascination of the psychological, and ontological implications of a moving image. If anything, the form is what changed, but the subject of the film remains personal across all my works.

RH: Do you have any experience in theatre?

MW: I acted in high school briefly, but at some point developed intense stage fright and made it a life goal to stay behind the camera. APSIS has many operatic scenes, and one of the more challenging obstacles Jake Magee [the cinematographer] and I came across in production was finding poignant breaks from the “stage” into a cinematic dimensionality: when to face the demon, and when to look behind him.

“… finding poignant breaks from the “stage” into a cinematic dimensionality: when to face the demon, and when to look behind him.”

RH: Have you worked with these performers before?

MW: I had previously collaborated with everyone who worked on APSIS. James Reid and Hannah Rikoon both starred in some shorter videos I made. I have been collaborating with the cinematographer, Jake Magee, for a while, and we started a production company called Autoscopy Films. The musicians as well– Michael Foster, and Leila Bordreuil Lovell, had scored some previous work. The process required creative input from everyone, and couldn’t have been made without the open dialogue we had during production.

RH: Can you tell me about the sound design in APSIS?

MW: Michael and Leila are both improvisational musicians, so we projected the film in sections in a large room, set up microphones, and recorded for two nights using an assortment of instruments. They had an immense understanding of the film and imbued the imagery with energy. The sound we recorded provoked changes in the editing, so the mixing and the final image cuts took a month or so to complete, and they would give me notes on every draft.

RH: What film stock did you use to achieve the Bergman effect?

MW: We shot APSIS on a B&W reversal 16mm film stock, which Sven Nykvist used in a few of Bergman’s films. We chose that stock because of the story’s timelessness, the location, and the stark character. I think this aesthetic works for Bergman’s films in a similar way, but we weren’t watching him too closely.

“I collected portrayals of the incubus, and other occult depictions and sketches and prints of patients at Esquirol’s asylum.”

RH: Who, then, were your artistic influences?

MW: I watched Oshima’s VIOLENCE AT NOON a handful of times during pre-production. Image wise, I was looking at Bacon, Goya, Ansel Adams, Edward Weston, among others. I collected portrayals of the incubus, and other occult depictions and sketches and prints of patients at Esquirol’s asylum. Throughout the entire production, I was listening to a lot of Toru Takemitsu, the Japanese composer.

RH: Can you tell me more about the stylistic influence of the occult?

MW: My research into the occult was extensive to a point. I read Colin Wilson’s incredible book,“The Occult,” and looked through countless online resources, as well as the various occult artworks I mentioned before. This research lead me to the idea of the incubus—the mare that haunts women in their dreams, which provided the first steps to conceiving the character. Eventually, I felt the story had delineated from this idea into something more personal, and certain overt occult elements were dropped. What remains is the exploration of the subconscious and conscious landscapes.

APSIS screens at Cambridge Arts Picturehouse as part of the TO RUST shorts on 13 September at 10.30