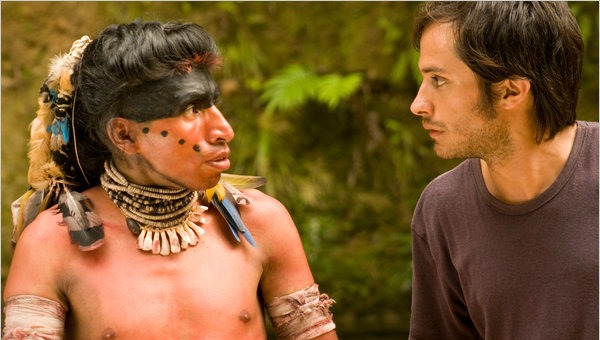 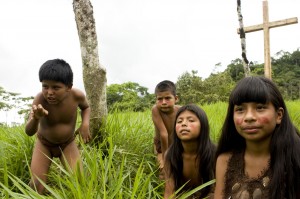 To watch the 2011 riots spread across Britain was a pitiful sight. Some called it an uprising demonstrating the will of the people. The initial cause might have had minor intentions but it escalated into a shameless rape of consumerism.  We are not oppressed, just mildly constricted.

EVEN THE RAIN uses a real rebellion, the Cochabamba protests of 2000, as part of its allegorical depiction of modern globalisation. Fighting against a capitalist government for simple utilities, such as water, demands attention. So what better way to represent imperialist subjugation than through a multi faceted plot structured around a film production?

Through a maze of moral quandaries we view the circumstances from multiple perspectives, ending with hope rather than despair.

Set in Bolivia, the plot centers around a movie being made about Christopher Columbus discovering South America. Tough producer Costa (Luis Tosar) and his director Sebastian (Gael Garcia Berna) hire locals as extras but one proves to be more than a hand full. Chosen to play the leader of the indigenous tribe, Daniel (Juan Carlos Aduviri) begins an uprising against the government’s privatisation of the water company. The filmmakers try to blackmail Daniel into avoiding the protest and keeping quiet, but to no avail. Through a maze of moral quandaries we view the circumstances from multiple perspectives, ending with hope rather than despair.

In western civilisation there is no other industry that exploits workers so blatantly.  Filmmakers form an oligarchical system whilst the others labor for meagre wages.  Channeling these political injustices through the greed of a producer and director both blinded by the need to finish their masterpiece is a clever trick. They never see the riots until the final moments, isolated in comfy hotel rooms, happy to sip wine and discuss. Their only contact with the events is what they hear on the radio or see on the news. Instead of dealing with the problem, they throw money at it until it disappears, displaying economical arrogance.

Even when faced with losing their key native actor, he and his producer forget their compassion.  They don’t realise the gravity of the situation.

Director Icíar Bollaín draws historical parallels with the invasion of Christopher Columbus. Whilst filming their scenes, Bollain chooses to ignore the production and focus on the significance of the scenes: the introduction of Christianity, persecution of indigenous tribes and the rapacious hunt for gold. Politically, nothing has changed.

Gael Garcia Berna’s director doesn’t see the similarities. He sympathizes with the protesters but only cares about the completion of his film.  Even when faced with losing their key native actor, he and his producer forget their compassion.  They don’t realise the gravity of the situation.

In one scene, Costa is arguing with Daniel when he stops to take a call from an American financier. He switches to English, telling the financier that everything is great because the locals work for a measly two dollars a day. When he finishes the call Daniel begins to speak English, repeating what Costa has said. Costa’s face drops, horrified. The realisation that his foolishness might have damaged his film becomes a tangible worry.

You can’t help but wonder if the makers followed their own moral code and formed a democratic production with fair wages.

Only in the final moments does the scenario take effect, when Costa is persuaded to help find Daniel’s daughter at the peak of the riots. Costa seems to be the furthest from redemption. Driving through the chaos, he sees what the will of the people means. Unwilling to be placated, they fight for what is rightfully theirs. As a producer Costa is ruled by money but he chooses the moment to remind us that nobody is a lost cause.

EVEN THE RAIN might wear its morals on its sleeve but it does leave itself as an open target. You can’t help but wonder if the makers followed their own moral code and formed a democratic production with fair wages. By criticising the industry’s own system they throw into question the film’s own existence. A film can be important but it has to cause a reaction or make a profit. Otherwise it’s just a movie. Ignoring those aspects, EVEN THE RAIN is still an accomplished achievement that manages to balance character with thematic form.