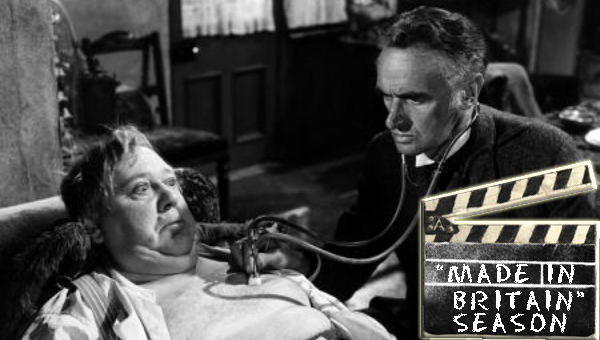 A truly Great British romance as well as a deliciously unconventional romantic comedy, HOBSON’S CHOICE remains a treat nearly 60 years after it first arrived on our screens. Showing as part of the “Made in Britain” season, this is arguably a story that could only have been made in this country. Its working class, northern English roots give the film a bracing texture that never allows it to become sappy or fall victim to cliché. It can also boast a trio of superb performances, led by the larger-than-life Charles Laughton, and marvellous direction from an on-the-cusp-of-greatness David Lean.

… it’s like a Mancunian FATAL ATTRACTION but with more laughs and less bunnies.

Henry Hobson (Laughton) is the king of his little corner of Manchester; the boozy, widowed owner of a profitable shoe shop, he runs his business and household with an iron fist. The shop floor is run by his three daughters – Maggie (Brenda De Banzie), Alice (Daphne Anderson) and Vicky (a young Prunella Scales). When he decides its time to marry off his two youngest girls, 30-year old Maggie (who practically runs the place already) takes matters in to her own hands. Unwilling to settle for the life of an old maid, as her father already calls her, she throws caution to the wind and fixes on Will Mossop (John Mills), a meek but talented boot maker working below stairs, to be her betrothed. Each successive obstacle on her path to independence is swept aside as romance blooms and business booms.

Mossop first appears as a timid blank slate of a man, unaware of his skills or potential. Maggie is officious and fiercely intelligent, the embodiment of a late Victorian-era woman raised without a mother’s love. Yet somehow the relationship between these two is as tender and surprising as any great screen romance. The way Maggie quickly steamrolls Will in to a first date, then elbows his current girlfriend out of the way, is a marvel to behold; it’s like a Mancunian FATAL ATTRACTION but with more laughs and less bunnies. Their very British courtship – she firmly taking charge, he accepting while completely awestruck – never slips in to the cliché of the nagging wife wearing the trousers in the relationship. Instead, under Maggie’s influence, Will blossoms as a man, overcoming his inhibitions and social status. Thanks to Mills and De Banzie’s perfectly pitched performances, it feels entirely natural for these two souls to fall in love because they complement each other so very well. There can’t be many rom-coms out there that feature a line like “You’re growing on me, lass” just as the bride and groom are about to walk up the aisle.

There is a fair bit of “Ee by gum” – indeed, Mills gets to say it repeatedly …

But then there aren’t many films like HOBSON’S CHOICE. The understated wit and charm of the script (from director Lean, Norman Spencer and Wynyard Browne) is delivered by its cast with élan. There is a fair bit of “Ee by gum” – indeed, Mills gets to say it repeatedly – but here it feels right at home. This is matched by some terrific location work, the nineteenth-century Salford setting richly evoked in Jack Hildyard’s crisp black and white photography, occasionally calling to mind L.S. Lowry’s distinctive depictions of industrial northern England.

But the film’s secret weapon is Laughton, in full brace-snapping mode as the habitually sozzled Hobson. His continual contempt for Maggie, Will, his public house friends, the law, and just about everyone else is a joy. Laughton delivers his lines with all the strength and precision of his shop’s footwear, which makes Hobson’s eventual comeuppance all the more satisfying.

HOBSON’S CHOICE was something of a watershed in David Lean’s career, being his last black-and-white, fully British movie before moving on to expand his canvas and ambition with SUMMERTIME, and then THE BRIDGE ON THE RIVER KWAI. Though it has been made to stand in the long shadow of its director’s later accomplishments, HOBSON’S CHOICE is a true gem that deserves a much wider audience.

The final instalment of the MADE IN BRITAIN will be the brilliant Hammer classic QUATERMASS AND THE PIT, screening in UK cinemas for one day only on 3 July. Click here to book tickets for Cambridge Arts Picturehouse.