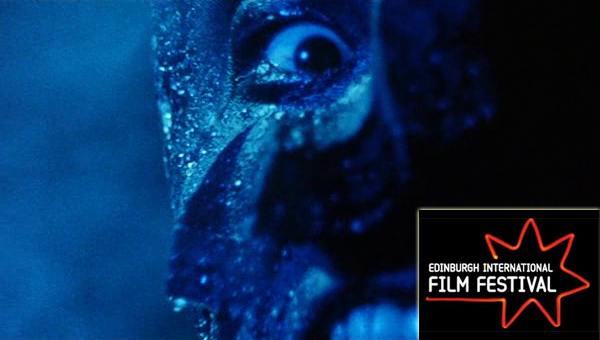 A drunken man staggers home through an underpass, followed by an unknown pursuer. From a first-person perspective, we see a bare hand making playful gunshot motions at the drunk, before he is brutally killed by what appears to be bullets. His pursuer is standing, arm smoking and outsretched, his companion looking on in reverence. The score of industrial sounds alternates with his heartbeat, as the pursuer places his hand on his chest and we see that it is now made of what appears to be living metal.

Against blazing red images of molten metal and steelworks, the individual letters of the film’s title, TETSUO II, snap onscreen like the hammer of a pistol, before the film’s apt subtitle appears: BODY HAMMER. We are then shown a family at breakfast, the last scene of normality before their lives begin to unravel.

Not a direct sequel to Cyberpunk classic TETSUO: THE IRON MAN, TETSUO II is closer to a remake, dealing again with themes of man, machine, and masculinity, featuring the same lead actors in similar roles. Tomoro Taguchi once again plays an apparently normal man who finds himself transforming into a fusion of flesh and metal, the seeming catalyst for those changes played by the film’s director/art director/editor Shinya Tsukomoto.

TETSUO II is brimming with ideas, not least of which is the clever costume design. The huge, loose, of-their-time outfits serve to conceal the characters’ bodies, making the alarming physiques in the many shirtless scenes all the more striking. The bagginess of the outfits also allows for a variety of inventive special effects – metal appendages jutting out from the billowing folds, the actual mechanism of the effects hidden.

… everyday locations seem made of rust and fire: cooling metal and harsh industry.

Using montage, always-welcome stop-motion animation, and kinetic camerawork, Tsukumoto creates a very visually engaging film that never stays still for long. Unlike TETSUO: THE IRON MAN, BODY HAMMER is in colour. The stylised palette in TETSUO II uses vibrant earth tones and reds juxtaposed with blues and greys, making everyday locations seem made of rust and fire: cooling metal and harsh industry. Some of the performances are curiously effective in their cartoonish intensity, with unsettling, exaggerated facial expressions and little dialogue. The characters’ rictus grins, in particular, leave some of the most lasting impressions of the film.

The lead actor, Tomoro Taguchi, engages our sympathy with an emotional and bewildered performance, which makes his eventual transformation all the more harrowing. This is perfectly offset by Tsukumoto as the antagonist, who has a feline composure that lends him an air of quiet danger. The film is awash with fetishistic imagery and pleasingly relentless homoeroticism. Skinheads work out in an abandoned metalworks, their naked torsos oiled and grimy, muscles flexing and steaming. Metal grinds against metal, as sinuous wires and cables writhe around it. Phallic, dripping weapons erupt from bodies, firing only when the person reaches an emotional plateau.

… the penis/gun connection is made almost literal, as if the point needed reiterating.

In one scene in particular, the penis/gun connection is made almost literal, as if the point needed reiterating. The comparison is hammered home to such an extent that it goes beyond absurd. At this point, it takes what could easily merit rolled eyes on the part of the viewer, and moves the idea into the realm of the unsettling and horrific. Mention must also be made of Chu Ishikawa’s hugely appropriate soundtrack, which is full of percussive clanging and driving guitar, which, like the costumes, is very of its time, but no less effective for it.

At only 80 minutes, TETSUO II: BODY HAMMER is the perfect length, and bombards the viewer with powerful images and thrilling ideas from the very beginning. It doesn’t relent until the end credits have finished, and it never feels wearing or monotonous. TETSUO II: BODY HAMMER is different enough to TETSUO: THE IRON MAN to be able to exist comfortably alongside it, and acts as both a worthwhile companion piece and an immensely enjoyable and thought-provoking stand-alone film.