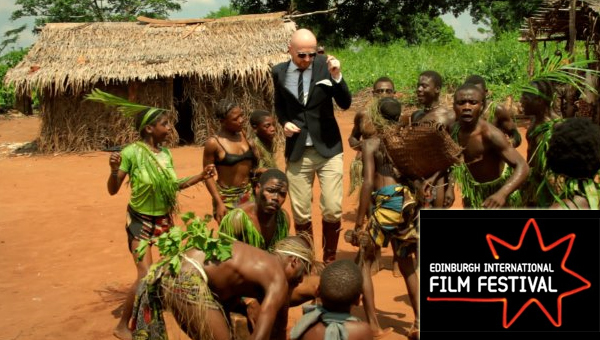 Mads Brügger’s last film, THE RED CHAPEL (seen in this country on TV as “Storyville: King Jong Il’s Comedy Club”) trod the fine line between bravery and stupidity and made something political, theatrical and provocative in the absurdist tradition of the Dutch Provo movement.

“If the Congo is the heart of darkness, then this is the appendix”

There he took on the Communist North Korean state. For the Zentropa produced THE AMBASSADOR Brügger was interested in exposing the corruption and exploitation of struggling African states, via the practice of white, European men buying diplomatic status in order to ensure immunity, and to profit from smuggling blood diamonds across borders. His ‘let us see what happens’ form of ‘performative journalism’ also brings Brügger the chance to indulge his childhood memories of the Africa seen in comic books of the 60 and 70s. The Central African Republic (CAR) still resembles what he describes as a ‘Jurassic Park’ – a country trapped in amber. ‘If the Congo is the heart of darkness,’ says Brügger in the film, ‘then this is the appendix’. It is a country so poor it has to import eggs.

Brügger attempts to buy what he hopes is diplomatic status from two brokers – a frightening and forthright British ex-military man, and the Dutchman Willem Tijssen, whose philosophy of the world consists of the underworld (the criminal class), the upper world (business people) and the back world (the people who really pull the strings).

It is in the CAR that worlds collide. The Old World Colonialism of Europe meets the accelerated, ruthless opportunism of the New World economies. In a provocative statement, Brügger proclaims to his African assistant that he doesn’t trust Asians – tongue in cheek, of course. But in turn, no-one can be trusted in this game, regardless of their origins.

Amongst the unsavoury characters he encounters, the most trustworthy seems to be the Head of State Security, the Brando-esque (obese period) Guy-Jean Le Foll Yamande, an ex-Foreign Legionary who has had his French passport removed. He speaks of development being ‘retarded’ in the country by external forces: ‘If you want to stop a man from walking, you put a stone in his shoe’. The stone in this case is military raids into CAR territory left unchecked and unchallenged by regular French military patrols, or the deliberate undermining of a burgeoning manufacturing economy which would have made the CAR the ‘Switzerland’ of Africa. His blunt, matter-of-fact warnings, carrying as much weight as his adipose frame, provide the filmmaker with much cause for concern. Around Brügger all trust disintegrates – his African assistant, Paul; his business partners; the brokers – until the only people he can remotely rely on are the two alcoholic pygmies he selected to run his match factory, and even then…

… he ramps up his character as the ambassador, out-crazying the crazies …

The threat of arrest, or even death, is very real as Brügger has the contracts he signed with a diamond mine owner withheld from him. The illegality and creeping danger of the situation reveals itself fully through the murky, inter-connected worlds of those around him – unscrupulous Muslim businessmen, wanted terrorists, corrupt and deadly politicians. He reacts to this situation with boundless eccentricity and nerveless comedic skill – he ramps up his character as the ambassador, out-crazying the crazies by playing whale song to his pygmy assistants, quoting speeches from General Patton, reciting amusing Hitler anecdotes and spilling blood diamonds all over the carpet of his converted night-club embassy, as the dealer presents them to him.

With THE AMBASSADOR, Mads Brügger spoils us with a shocking, eye-opening, mischievous and hilarious film.