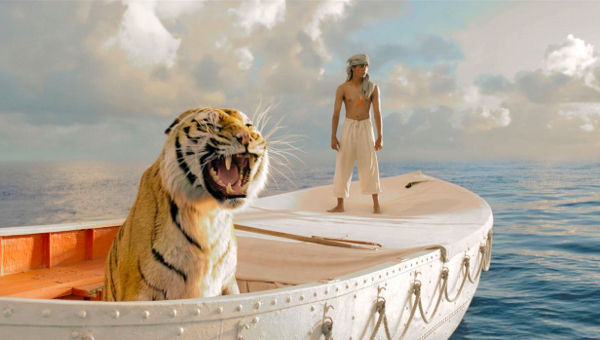 Ang Lee’s LIFE OF PI is a captivating film that will surely be seen as a technical landmark. But contrary to the central character’s assertions, it’s unlikely to create a belief in the divine; and some of the film’s narrative points are made with all the subtlety of a tiger claw to the face.

Pi Patel is a young Indian man who lives in Pondicherry, India, with his zoo-owning family. A spiritually inquisitive young man (played for much of the running time by Suraj Sharma), he embraces his Hindu upbringing as well as Catholicism and Islam. When his family decide to relocate to Canada, and sell their zoo animals there, Pi is distraught – but sets sail with his parents and brother. When the ship sinks during a terrible storm in the Pacific Ocean, Pi ‘escapes’ on a lifeboat with some of the zoo animals – chief amongst them “Richard Parker”, a ferocious Bengal tiger. The adult Pi (Irfan Khan) relates his tale of surviving 227 days at sea with Richard, to a Canadian writer played by Rafe Spall.

Some of the images put together by Lee are captivating [but] less is often more in LIFE OF PI.

Amongst the stunning visuals much could be made of one particular psychedelic mental voyage, but less is often more in LIFE OF PI. As Pi’s lifeboat floats under a dark, starry sky, the sea and the heavens merge into one, and Pi’s isolation comes into clear, sharp focus. This striking, symbolic imagery is given additional weight when contrasted with shots where the extra dimension is more apparent – the ship sinking, a violent flourish from the Tiger or brutality of a storm; sequences impressive in their own right. Although often lazily touted as “immersive”, the 3D techniques have a clear purpose here that elevates the storytelling. The visual splendour of the film, and some of the fantastical events it depicts, play into the narrative as wonderful foreshadowing of a powerful but gently rendered conclusion.

LIFE OF PI examines the power of storytelling and the nature of religious faith, and their roles in the lives of the curious, the desperate and the perfectly content. The dull and washed out setting for the final recital is symbolically at odds with the colourful epic that goes before, a subtle but important touch. With this in mind, it’s unfortunate that certain aspects of the script feel blunt and simplistic by comparison.

In the same way that the over-explained penultimate scene of PSYCHO feels a bit ham-fisted and out of place, so do the closing moments of LIFE OF PI.

Having told such a wonderful tale, the comparative lack of finesse shown in the final narrative reckoning feels like being bonked on the head by Timmy Mallet. In the same way that the over-explained penultimate scene of PSYCHO feels a bit ham-fisted and out of place, so do the closing moments of LIFE OF PI. The ending’s power is blemished by (an increasingly gormless looking) Rafe Spall didactically and unnecessarily verbalising the revelatory metaphors of the story. In addition, the finely balanced spiritual outlook of the film comes down to no more than a rickety house of cards built on Pascal’s wager. For a film with such lofty philosophical aspirations, this is quite deflating.

Despite the terrible (post-events) exposition and the gooey-eyed take on spirituality, Ang Lee has created a fantastic vision – marrying some wonderful symbolism with jaw dropping special effects work. Although certain narrative themes seem overblown or loaded with fallacious simplicity, film is a visual medium at heart and LIFE OF PI is the work of a visual storyteller at the top of his game.

One thought on “Life Of Pi”