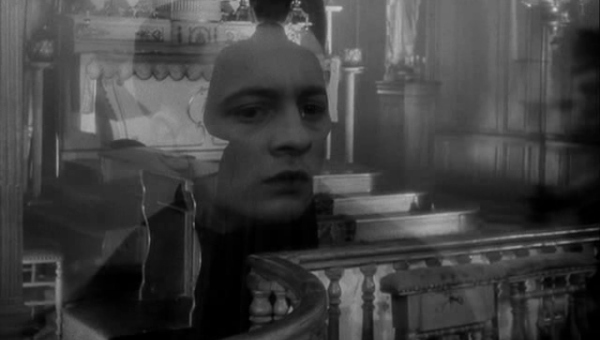 “Robert Bresson is French cinema, as Dostoevsky is the Russian novel and Mozart is the German music.”
– Jean-Luc Godard

A film so frequently described as “austere” and “Catholic” sounds about as appealing to the layman as a book with no pictures or conversations. However, the DIARY OF A COUNTRY PRIEST, not as racy as that of the Lost Girl or the Chambermaid but possibly comparable to that of Adrian Mole, will resonate with anyone who has turned to Sartre and cheap plonk in their adolescent years.

Expertise in film history and technique do not enhance appreciation of this piece – in fact, they would blind a viewer to the “essential soul” which is Bresson’s heartfelt gift to them. Held up as a film-making paradigm by Andrei Tarkovsky, and worshipped to an obsequious degree by his fans, Bresson explored soul searching themes which form the bedrock of Blockbuster to this day – from worthy coming-of-age drama to fish-out-of-water comedy. With “Priest”, Bresson traces the Passion of the Christ through the struggle of a spiritually constipated young Father (Claude Laydu) to enlighten a reluctant parish in wartime France.

“Cinema is the art of showing nothing.” – Robert Bresson

Like his contemporary Yasujirō Ozu, Bresson’s potency often lies in his emphasis on lacunas over events, having us eat the hole as well as the doughnut, and creating a strong consciousness of impermanence. In his own words: “Cinema is the art of showing nothing.” “Priest” is a delving into the unconscious, where the director blindly draws spirit from the actor without dictating its course, allowing it to flow, smudge and blot as it will, and find its place in the heart of the universal viewer. Bresson layers diary, voiceover and depiction to examine an event with gentle objectivity, leaving the viewer to pass their own judgement and interpretation. We should approach the film first as sentient beings, not as scholars. The Priest’s inexperience is illustrative of the director’s own self-confessed rawness at the time of filming – Bresson allowed artistic conceit and learned convention to place non-diegetic masks over some scenes which he now feels should have lain naked.

Bresson laboured his performers until their innermost secrets bled through…

Throughout the film, the ingénue Laydu maintains perfectly the tortured aspect of one who is regularly sick into his own mouth. It is tempting to interpret the Priest’s delicate constitution as a symbolic, psychosomatic affliction: – the Priest literally cannot stomach sin. His character pre-empts the rapturous melodrama of latter-day goths who survive for days on red wine, and then cry tuberculosis when their stomachs finally form a red revolt. Although the viewer should not cast judgement in haste, the character of the Priest is familiar to a modern-day viewer. The inkwell eyes of the self-flagellating youth in a black cloak are timeless – from opium eater to twenty-first century emo. The Catholic verse anthems of the Restoration period evolved over the centuries to find their spirit carried by anthemic rockers such as Fugazi and Television, whose followers drink the same plonk and suffer the same existential turmoil as the Priest.

Bresson laboured his performers until their innermost secrets bled through, his method of repetition almost comparable to brainwashing – but it is hard to believe that the passion of Nicole Ladmiral was far below the surface in her approach to the role of Chantal, a rebellious young girl who puts a spark in the Priest’s huge eyes. In his dealings with Chantal, the paralinguistic language of callow love flows from the Priest like ink from a pen, in touching contrast to his clumsy catechism. Chantal’s provocative railing is soap-opera teen on the surface. She hates her mum, she hates everyone, she’s going to run away from home and do something absolutely shocking; but looking beyond the words as Bresson would have us do, one sees Ladmiral via Chantal express profound passion and suffering. Although she appears to be no more than sixteen, she was in fact twenty years old when she appeared in the film, and her complex and moving performance is all the more fascinating when one learns that this remarkable girl threw herself under a train just seven years later.

Laydu’s worn words rumble like weary plumbing, counterpointed by the bolstering warm wisdom of the Priest of Torcy.

Bresson’s semiotic approach builds up a steady dripping of isolated images and objects which accumulate pictogrammatically. The meagre trappings of the nameless Priest are, to quote the nameless protagonist of “Fight Club”, “things that you used to own, now they own you”. The fetishised trappings of the Priest’s sacramental diet – dirty bottle, stale bread, baleful stump of a stove – swell grotesquely into Magritte’s “Personal Values”. The diffuse, moist lighting evokes Sartre’s Nausea where it is “made of white, soft instants, spreading at the edge, like an oil stain”. Heavy shadows follow the Priest like a reaper, but he finds Father in an uplifting encounter with the avuncular Priest of Torcy. Bresson is often quoted as placing much value in the quality and cadence of a voice over the appearance of a performer. Laydu’s worn words rumble like weary plumbing, counterpointed by the bolstering warm wisdom of the Priest of Torcy. The Priest hitches a lift out of town on a motorbike and breaks a peggy, jolie-laide smile. Brief encounters toward the end of the film delight and repel him, courting the life of the common man but fearing it – and he falls into a swoon of that dizziness described by Kierkegaard (writing as Haufniensis) as “dread of freedom”.

“Some madman’s put up a cross!”

The end of the film holds on the image of a cross, with the unfortunate distraction of subtitles for non-French speakers. It brings to mind the “Father Ted” episode “Cigarettes and Alcohol and Rollerblading”, where Father Ted erects a large wooden cross in front of his house, so that people will know he’s “a priest and not some madman”. That night, a passer-by remarks, “Some madman’s put up a cross!”. Throughout the film, the man of sorrows has fought to establish a satisfactory link with God, and he has hung from his window listening in vain for a vocation, and his parish treated him no better than a madman. But like Sartre’s Roquentin, by the time we settle on the image of the cross, we know that the Priest has found his release from disgust into heroism.