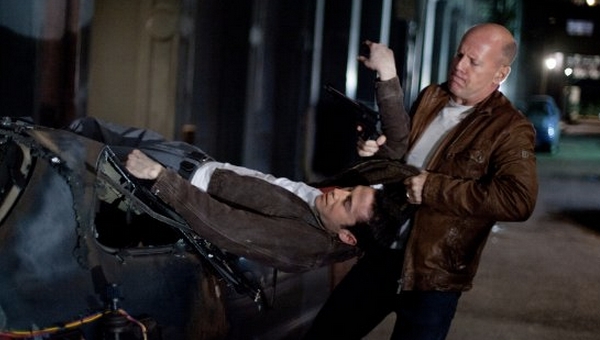 One of the key strengths of Rian Johnson’s LOOPER is that the messages you take away have very little to do with the time travel framework. This is a movie about people, the choices or sacrifices they make, what forks we take in the road, and the balance between villain and hero, and one told with unflinching brutality.

Joseph Gordon-Levitt plays Joe, a ‘looper’ in 2044 Kansas. By the 2070s, time travel will have been invented and outlawed and is used only by organised crime syndicates. Joe’s job is to terminate those sent back to him from the future and dispose of the body in the past, for which he receives handsome pay. He lives a lavish lifestyle of drugs and sex, but Joe becomes the latest looper required to ‘close’ his loop: to kill his future self (Bruce Willis). After failing to do so, a violent and bloody quest ensues as the alternate versions of Joe seek to put things right in their linked but now very separate lives.

The brutality Rian Johnson weaves into LOOPER is something that immediately hits like a punch to the gut. In BACK TO THE FUTURE, when messing with causality, Marty McFly just faded from some photos. The temporal torture meted out by crime boss Jeff Daniels is decidedly more horrific. To go into details of the film’s other striking and punishing imagery would be to give far too much of the third act away, but LOOPER certainly isn’t afraid to peer into the darkest corners of human potential. The balance between villain and hero swings back and forth throughout.

…LOOPER certainly isn’t afraid to peer into the darkest corners of human potential.

The best sci-fi – even if drawing upon previous projects – is driven by ideas. Whilst this is true, what makes the story of LOOPER compelling is the character drama with a real emotional core. Undertones of nature versus nurture, the value and extremity of personal sacrifices and quite a bit more are all moved along by the inventive eye of Johnson (some of the camerawork strongly bringing to mind the first episode of Breaking Bad he directed, as much as his previous film work) and sharp dialogue.

Some elements do stumble – in order to put everything in place some heavy-handed exposition is needed, a trap that often befalls time travel films. In addition, although the film may distract you with the many intelligent layers, it never quite shakes the notion that there must be easier ways for faceless future kingpin ‘The Rainmaker’ to deal with problems than the events that set the plot in motion. However, these aren’t massive problems like the ones that beset the ideas-laden but clumsy PROMETHEUS, for example, and largely don’t matter here. There are, in fact, numerous points where the film explicitly rejects the normal hang-ups of the more unimaginative films of the genre – “It doesn’t matter!” Willis roars after his younger self tries to prod at the mechanics of it all.

“Gordon-Levitt has created a plausible version [of Willis] that has never actually existed, […] far more cleverly, he’s playing what we think Bruce Willis would have been.”

Bruce Willis is superb, following on from his self-subverting turn in MOONRISE KINGDOM with a twist on his normal action persona, his appearance having more than a hint of TERMINATOR 2 about it. Much has been made of the subtle physical transformation of Gordon-Levitt to mimic Willis’ more distinctive features. More impressively, he has captured the mannerisms, and the curious mix of arrogance and humility, that we have come to associate with Willis since DIE HARD. With his image of Willis, Gordon-Levitt has created a plausible version that has never actually existed. To say he’s playing Bruce Willis is to do his acting a disservice – far more cleverly, he’s playing what we think Bruce Willis would have been. Drop this character into Moonlighting and you’ll have problems.

If you pick too much around the edges of LOOPER, it will inevitably fray slightly, as do many intricate time travel yarns. However, LOOPER is a layered and intelligent neo-noir science fiction with some striking images and more emotional resonance than the likes of INCEPTION. By the time the clock stops ticking and the film closes its own circle, the story will continue to go round in your own head.

LOOPER screened on September 23rd as the Surprise Film of the 32nd Cambridge Film Festival.