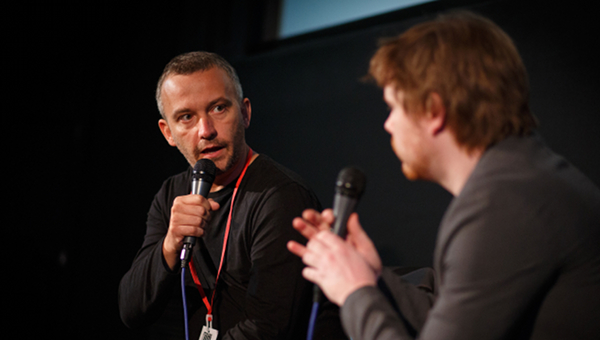 Director Christophe Wagner was at the Cambridge Film Festival to show his new film, the police thriller DOUDEGE WÉNKEL (BLIND SPOT) – a taut and engaging movie with a strong hand behind the camera in Wagner. Jim Ross spoke to him before the screening about the film and the film industry in Luxembourg, his native country.

Christophe Wagner: The thing is, when we were writing the script it was meant to shoot in French as it would be easier to sell initially, or even shoot in English. A number of our young directors shoot in English because they studied in England and everything. More and more we thought that if it was taking place in Luxembourg, it should be in our language. There are three languages as that is the way people talk in Luxembourg. I speak five, and four is the average for most young people in the country. Luxembourgish also kept it a little exotic and maybe made it easier for us to get it into festivals, rather than competing with other movies in French. The big difficulty is actually, as we’re a very small country, finding enough actors of sufficient quality to play the parts in the language.

“Luxembourgish also kept it a little exotic and maybe made it easier for us to get it into festivals, rather than competing with other movies in French.”

JR: From what I can see, Luxembourg seems to have quite a vibrant industry for such a tiny country. Why do you think that is – is it the influence of neighbours or something else?

CW: What’s very important is that we began to build up an industry 20 years ago – so we’re babies really in that respect. What we did to begin with was develop co-productions – we can then get technicians and such who can gain experience, building it up that way. Then in the 90s, more and more, there were directors who came out of film schools. I’m of the first generation who came through that route. There were two younger directors who did it before, and I’m the third one. So that’s they way we want to do it, but it’s a long road as we have problems getting good screenwriters – it takes a long time to build up.

JR: There seems to be a lot of documentaries, as well.

CW: Yes, that’s how I cam into the film industry, doing a few documentaries on social issues. It’s a lot easier to fund a documentary than a narrative feature. There are a lot, yes, but we’re trying to have more feature films. We had a few short movies that got attention at very big festivals. It’s building up, but it will take a while to get anywhere.

JR: Would you say, after a lot of investment and perhaps relying on co-productions initially, that film in Luxembourg is beginning to find its own voice then?

CW: I think it has to. We have to build something on our own language and culture. And a fair bit of money is now being put into Luxermbourgish features and very much, also, in the screenwriting. Having very good scripts is the base of any movie. It is changing, but it’s not a point on the movie map. No one knows anything about Luxembourg cinema. For instance, in France there is little interest in what we are doing as a country. Belgium and Germany is perhaps a little different, but France? Forget it. I tried to do BLIND SPOT in France but was told to do it in my own country.

“It is changing, but it’s not a point on the movie map. No one knows anything about Luxembourg cinema.”

JR: Do you think that would have been different had the shooting script been in French?

CW: I think it would have been a different budget – and therefore a different movie – but I’m glad we did it the way we did. It would have to bet set in France, in order to do bigger movies you really have to go after co-productions in places like France.

JR: This is your first narrative feature – how did you go about approaching that? How much of your documentary experience did you take in to it?

CW: Quite a bit, really. I think it’s the best school for young directors before making their first narrative feature. Young directors try to put everything they want in the frame, and in documentary it’s the opposite – you see what is happening in front of you and you decide how you’re going to film it. I thought this was really interesting, and helped me to find the best solutions for what I wanted to shoot. It maybe sounds bizarre, but I do think that is the best school for shooting film. I had a reputation in Luxembourg for documentaries – that’s how people knew me – and people weren’t expecting much from my narrative feature. It’s funny, you always categorise things like that but you’re always telling a story.

“I think [documentaries are] the best school for young directors before making their first narrative feature.”

JR: It’s introduced that Olivier is gay, was that included for social commentary or just to emphasise his isolation within the film?

CW: It’s both of them, really. The difficulty with doing a crime thriller is everyone sees four or five crime series a day and you need to find a way to tell the story originally and differently. So we wanted to look for a problem from social drama and translate that into the thriller motif. The gay idea was the most interesting for me; to be isolated in a conservative society. And also he’s a cop, which is a very masculine world. It’s not a theme with a personal impact for me, but it was unusual for a gay cop to be in a thriller. It was a way to present the character differently, without placing too much emphasis on it.

One thought on “Christophe Wagner Interview”