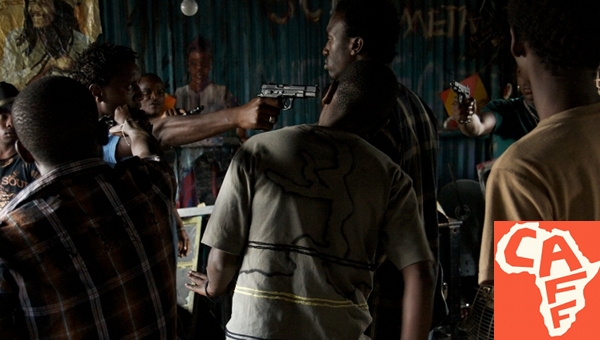 NAIROBI HALF LIFE, the Kenyan submission for foreign language Oscar, is a gripping and heartbreaking tale of young Mwas. Putting a distinctly African and Kenyan twist on a well known aspirational tale, the end result is a heartbreaking saga that will cross cultural boundaries with aplomb.

Joseph Wairimu plays Mwas, a young man living in semi-rural Kenya. He makes a modest living at home selling DVDs of Hollywood films, and dreams of an acting career. However, to realise this dream he must travel to Nairobi, with the warnings of his parents ringing in his ears. Although this metropolis is seen as a mecca of opportunity, Mwas is in danger of being sucked into a vortex of poverty and crime. Summarily liberated of his possessions upon arrival, that is exactly what happens to him: descending into a double life split between initially petty crime and the opportunity to appear in a play (that, in the brief glimpses we get, seems to vaguely resemble THE EDUKATORS).

Wairimu gives an extremely engaging and layered performance as Mwas…

Wairimu gives an extremely engaging and layered performance as Mwas, beginning as the eager and doe-eyed innocent. He wanders the streets of Nairobi with his gaze to the skies, but it isn’t long before the city grinds him down and almost spits him out. His new-found friends, the charismatic rogue Oti and his gang, give something to stop Mwas coming totally adrift, but Wairimu effectively conveys the strain suffered in maintaining the double life he must lead to pursue the real dream he came to Nairobi to fulfill. Although Mwas’ tendency to emulate King Leonidas, the music swelling melodramatically in the background, begins to grate, the screen magnetism of Wairimu ensures a continued sympathy.

The story of an underworld consistently pulling an essentially decent soul back in, at great emotional cost, is a well trodden path. However, Tosh Gitonga maintains a distinct voice through the narrative. The aspirational themes are universal, but they are refracted through the rough and often brutal prism of modern Nairobi. The thespian characters, particularly Mwas’ theatre co-star Cedric (Mugambi Nthiga), allow the film to touch upon themes of great relevance in contemporary Kenyan society, related to sexuality and class divides.

The aspirational themes are universal, but they are refracted through the rough and often brutal prism of modern Nairobi.

Gitonga, who has built his career to date as assistant or second unit director on various projects, also displays an excellent eye for visuals that back up the narrative thrust. As our gang of miscreants lies in a jail cell, shards of light illuminate their individual faces in the darkness. Although a fantastic image, it’s also a wonderful visual metaphor for the plight in which they find themselves: they continue to gaze to a bright future, whilst the remainder of their lives remains buried in grimy shadows.

The first submission by Kenya for the Academy Awards, NAIROBI HALF LIFE is a universal tale of aspiration against adversity, with deeply engaging local nuances. If it is to be indicative of the sort of output generated by the One Fine Day Film Workshop, then cinema will be all the richer and more diverse for it.

NAIROBI HALF LIFE screens at the Arts Picturehouse on Saturday 10 November at 20.45 as part of the Cambridge African Film Festival. Book tickets here.

3 thoughts on “Nairobi Half Life”