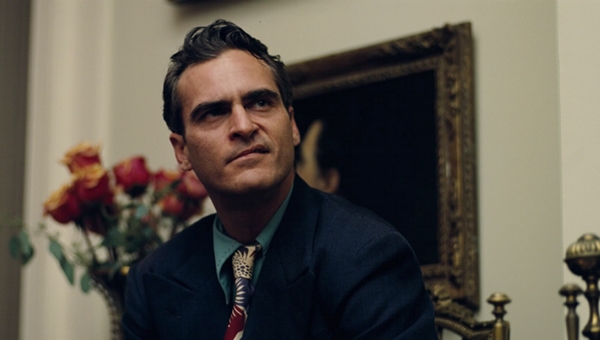 Although his previous features indicated a filmmaker of invention and vision, it was 2007’s THERE WILL BE BLOOD that marked out Paul Thomas Anderson as arguably the finest American director of his generation. With THE MASTER, an often mesmerising and incredibly involving piece of work, the ambition grows even further. However, this sprawling film leaves you wondering whether Anderson has explored all the themes touched upon to best effect, and if it ever coheres quite as well as his other work.

In the aftermath of World War II, Freddie Quell (Joaquin Phoenix) is introduced to us. Giving a window into what will be his most persistent vice, his first act upon the ending of hostilities is to concoct moonshine by draining fuel from a torpedo. Later losing his job as a mall photographer due to a drunken confrontation, he becomes a drifter who is again on the run when his latest batch of intoxicant leaves a fellow farm-worker in a bad way. This delivers him by chance into the world of Lancaster Dodd (Philip Seymour Hoffman), a charismatic but enigmatic founder of a movement called The Cause. The film then charts the relationship between the two, as Dodd uses Quell as his “guinea pig and protégé”.

The centre of the film is very much Phoenix’s Quell. The phrase ‘damaged goods’ is bandied around in cinema and television with careless abandon, but rarely has it been embodied better than this shambling, slurring and emotionally scarred wreck of a man. Addicted to cocktails of god-knows-what and still in love with a woman he failed to return to years ago, he is decried as an “animal” more than once by Dodd. Something about the 65mm shooting process has perfectly captured the wonderfully expressive face of Joaquin Phoenix, in what could be the best performance of his career. Quell is looking for something, but isn’t entirely certain what that might be. He is now drifting through life, and thinks Dodd and The Cause may give him something to cling to.

The phrase ‘damaged goods’ is bandied around in cinema and television with careless abandon, but rarely has it been embodied better than [Joaquin Phoenix’s] shambling, slurring and emotionally scarred wreck of a man.

It may initially surprise, given the title, that Quell is the focus of the film rather than Dodd. However, what thesis THE MASTER does have is reliant upon our understanding of Quell. Much has been made of the similarities that Dodd and The Cause share with L Ron Hubbard and Scientology. Yet even if we have analogues for various aspects of Dianetics, Dodd is really an avatar for that curiously American fascination, the charismatic evangelical figure, coming with dubious promises of a better life to lost souls. The interest lies not in what these figures promise, but what it is that draws people like Freddie Quell to them and vice-versa. Given he inhabits the same sphere as Daniel Plainview, and even Tom Cruise’s Frank T. J. Mackey in MAGNOLIA, Anderson had no need to retread that ground explicitly again.

Quell is the sort of damaged soul movements like The Cause draw in. Although Dodd’s promises of fulfillment and betterment are nothing more than artifice – a Machiavellian machine lubricated with snake oil – the American Dream is no more substantial to the likes of Quell than the flimsy metaphysical hokum Dodd pushes. Quell, as a result, needs something else and The Cause initially offers that. When he sees The Cause for what it is, he first denies it before trying to reclaim his own reality free of definition by Dodd. Where THERE WILL BE BLOOD examined the damaging toll of the rabid ambition of modern America, THE MASTER hints at an examination of what happens to those left behind by it and how they are taken advantage of. At the dawn of an age of unabated capitalism and the fear of communism, Freddie is simply out of step, and Dodd’s hypnotic nonsense seemingly offers a path to salvation for those like him. The cynic who points out Dodd’s cultish movement is not a fellow down-and-out, but an eloquent individual (brutally dealt with later by the loyal Freddie) at a swanky Park Avenue party.

THE MASTER, as a result of the many layers to the central relationship, can be taken on several levels, but at a basic one it is simply about the symbiotic back and forth of Quell and Dodd; in particular, Freddie’s early submission to “processing”. Dodd probes Freddie with personal questions asked with an unsettling repetition, getting under Freddie’s skin by stripping away the years of emotional callouses his life has built up.

Although an undeniably brilliant piece of work, and an incredibly involving tale, THE MASTER never coheres thematically in the way THERE WILL BE BLOOD or even the operatic MAGNOLIA did.

At the risk of incurring the wrath of many Venice-goers however, the epic scope of Anderson’s feature perhaps muddies the message slightly. Although an undeniably brilliant piece of work, THE MASTER never coheres thematically in the way THERE WILL BE BLOOD or even the operatic MAGNOLIA did. Many of the themes present in MAGNOLIA rear their head again here – relationships with patriarch figures, the nature of regret for life decisions, and the far-reaching impact of dysfunctional relationships. Rather than filtering these through several characters, the grandiose scope is channeled through Quell alone. The result is a rather overwhelming mix, which threatens to smother the central pair in the opaqueness of it all during the second act. THE MASTER is not a film that can be tamed, and, indeed, with a retrospective and distant view the whole may become more apparent. Rather than an original work, at the moment, it feels more like an adaptation of an epic character novel, struggling to communicate the depth of the source material.

…even if the ambition threatens to have the film labour under the weight, much of what marked out Anderson as one of the finest directors of his generation is given its most profound expression in THE MASTER.

Having said this, even if the ambition threatens to have the film labour under its weight, much of what marked Anderson out as a great director is given its most profound expression in THE MASTER. The terrific camerawork, with methodical dolly shots and steadicam work, has become a trademark and is once again a standout technical aspect. Anderson’s meticulous shots aren’t just wonderful to look at, they also boast a terrific understanding of character contrast and storytelling, engendered by composition and camera movement that has those goals in mind. Radiohead alumnus Johnny Greenwood also hits all the right notes, his score fitting firmly alongside the magnificently ominous efforts of THERE WILL BE BLOOD and Lynn Ramsay’s WE NEED TO TALK ABOUT KEVIN. Anderson’s first collaboration with cinematographer Mihai Malaimare Jr, whose work on Coppola’s TETRO was so impressive, delivers some truly wonderful images (particularly incredible on the 70mm print).

THE MASTER is a work that will get the synapses firing and leave them crackling with activity long after we leave Freddie Quell and Lancaster Dodd. A peerless performance by everyone, in front of and behind the camera, render it an extraordinary addition to Paul Thomas Anderson’s oeuvre and an example of a director at the peak of his powers. Its grand thematic scope means that, whilst it might be Anderson’s most individual work, it perhaps lacks the catharsis of THERE WILL BE BLOOD or MAGNOLIA. Despite that, it remains a frustratingly wonderful journey.

2 thoughts on “The Master”