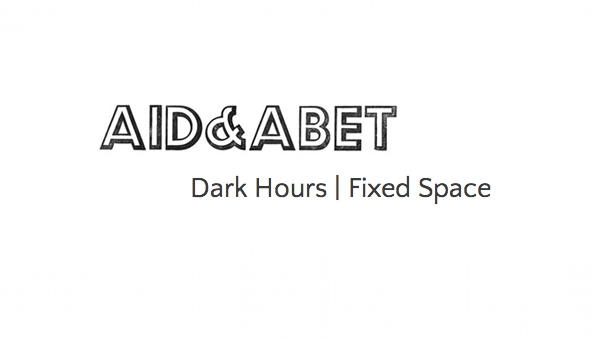 Film art is not a new practice, but of late there seems to have been something of an explosion in this specific area of filmmaking. With the saturation of the big screens with huge blockbuster franchises and the ever encroaching dominance of the digital, there is perhaps a very good argument for a new(ish) space for film creativity. With films like the inspiring low budget documentary GRANDMA LO-FI, a film that revels in its creation of a digitally resistant aesthetic reflexive of its own subject matter, arthouse cinema strives to fill this void to some extent. Yet, perhaps the gallery is the next obvious port of call.

A new venue for such endeavours has emerged in Cambridge. Aid & Abet. An artist-led exhibition space located very conveniently in an old warehouse opposite the train station, it ends its autumn programme with a series of collaborative moving image screenings.

One such screening was the premiere of DARK HOURS/FIXED SPACE. The preview consisted of a programme of approximately 38 one-minute short works called One Minute Volume 6. A filmic equivalent of antipasti, it offered an eclectic range of tastes, senses and sensibilities. There was everything from dancing genetically modified peas to feminist word play and balaclava-clad freedom fighting gardeners, all distilled into morsels of only sixty seconds in length.

A filmic equivalent of antipasti, it offered an eclectic range of tastes, senses and sensibilities.

Not only was there an overwhelming array of themes but styles as well. Some stand-out works included LONDON FIELDS by Riccardo Iacono, a black and white piece that, perhaps due to the subject matter, evoked thoughts of Kurt Kren’s 1960 TREES IN AUTUMN. Though with no soundtrack, diegetic or otherwise, it lacks the same embodied chaotic intensity. This is not a criticism however, as the comparison is solely thematic and the two films diverge on anything more than a superficial level.

AUTUMN MOON by Chris Meigh-Hughes, with its focus on the beauty of artificial light in an exotic Asian setting, was reminiscent of a Joe Weerasethakul short. The simplicity and brevity of Nicki Rolls’ DREAM HOUSE evoked cinema’s humble beginnings and those first works by the brothers Lumiere. There is the same hypnotic rustling leaves in the background as with BABY’S MEAL, yet the stillness and reflectiveness of the foreground manages to create an eerier sensation of suburbia.

Only sixty seconds in which to express an idea. Yet in such finite conditions, this programme shows that creativity can easily be distilled into such a demanding timeframe.

A WOMAN FROM THE PAST MUCH LOVED by Stuart Pound has great appeal for anyone who shares in an almost fetishistic love for film stock – in fact it may be the film, rather than the woman, who is the much loved. Juan Zamora’s animation, WHISTLING, is so pure and unassuming as a concept yet highly effective and enjoyable. Only sixty seconds in which to express an idea. Yet in such finite conditions, this programme shows that creativity can easily be distilled into such a demanding timeframe.

A woman from the past, much loved. from Stuart Pound on Vimeo.