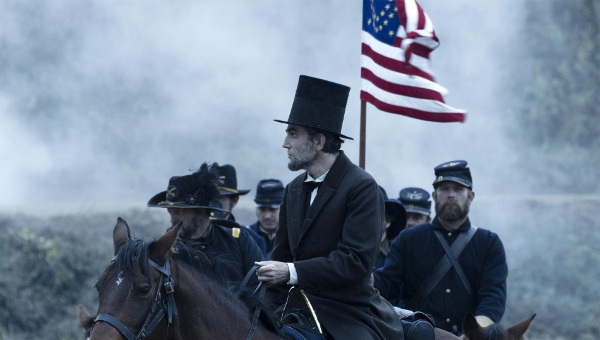 Abraham Lincoln is a figure so historically prominent and already heavily examined that in order to make a film about him he must be hunting vampires – unless you’re Steven Spielberg. In front of the camera, Daniel Day-Lewis once again displays his versatility as an actor, with an excellent performance as the USA’s 16th President – one of the most examined politicians in history. This isn’t the classically trite, awards-pandering biopic, though. Spielberg has put together a film that is reverent but not fawning; familiar but not clichéd; measured but not ponderous.

The setting is the aftermath of Lincoln’s fractious re-election in 1864, as the US Civil War continues to rage, and the story follows him and his allies as they attempt to pass the 13th Amendment – an alteration to the US Constitution outlawing slavery. The film charts the political machinations employed by Lincoln as he attempts to balance the need to negotiate with the Confederacy with his determination to do what he feels is correct or necessary.

What is striking about LINCOLN are the lengths it goes to in order to avoid clichés, even poking them with mild satire from time to time. One of Lincoln’s aides humorously articulates his exasperation at Lincoln gearing up “to tell another story”, in proverbial fashion. At the opening of the film, the words of the Gettysburg address are spoken in (initially) a haphazard and half-remembered manner by two soldiers, rather than Lincoln himself. Even the assassination (although its need for inclusion is questionable) is dealt with in a manner that subverts normal portrayals of the event.

Spielberg’s film, and primarily Tony Kushner’s script, is reverent of Lincoln, but does not portray him as a moral crusader. Although he sees the 13th Amendment as morally correct, his determination comes about as a result of opportunistic timing. Spielberg’s Abraham Lincoln has a moral core, but the actions and tactics of a skilled political pragmatist. He gets the votes for his legislation as much through bending rules, and offering political deals in (literal) smoke-filled rooms, as he does from inspiring rhetoric.

Even then, Day-Lewis’ portrayal also eschews the popular vocal take on Lincoln and the idealised $5 bill version that permeates modern culture. He is a weary-looking, and slightly hunchbacked man. He speaks with a gentle, high resonance, not in the booming manner we always get fed; but is always captivating. In addition, stirring supporting performances from Tommy Lee Jones, Sally Field, and David Strathairn more than carry the acting prowess beyond the Oval Office.

Spielberg’s craft as a film maker is also on show in comparatively restrained form. Although there is a flourish near the start – of a Civil War battle scene not unlike SAVING PRIVATE RYAN – we find Spielberg in a similar mode to MUNICH, AMISTAD or SCHINDLER’S LIST. Although focusing upon the efforts of good men to work within evil or corrupt systems, LINCOLN has a similar outlook with less direct tugging on the heart strings. Lincoln makes clear his moral goals, but it is not presented as an emotional issue – but as a laudable political necessity which will better his country.

…a remarkable window on the life of a determined historic figure and a fascinating period in American history.

He faces an intractable Congress over a bitterly divisive issue – this has some contemporary political resonance, with the struggles in the wake of Barack Obama’s re-election. Much like THE SOCIAL NETWORK, however, the actual impact lies in making what should be procedural and dull absolutely riveting. That 2010 hit managed to make the legal proceedings of snot-nosed and arrogant young men a fascinating character study. LINCOLN manages to make the machination-enabled legislation (of something which seems, from a comfortable modern perspective, self-evident) into a remarkable window on the life of a determined historic figure and a fascinating period in American history. The cultural backdrop, and Lincoln’s wrestling with personal dilemmas over his son Robert (Joseph Gordon-Levitt) and wife all add character flesh to the political bones. Compare these elements and the engaging drama with Robert Redford’s similarly measured, but deathly dull 2011 film THE CONSPIRATOR.

Given Abraham Lincoln’s significance as an historical figure, LINCOLN is a film almost as remarkable for what it doesn’t do as what it actually puts on screen. It doesn’t pander to popular notions of Lincoln, and in fact reveres him by gently mocking some of them. Abraham Lincoln said in one of his earliest published speeches in 1838, “Towering genius disdains a beaten path. It seeks regions hitherto unexplored. It sees no distinction in adding story to story, upon the monuments of fame, erected to the memory of others.” Whether Spielberg’s film is a work of ‘towering genius’ is up to individual cinema-goers, but it certainly disdains the beaten path.

One thought on “Lincoln”