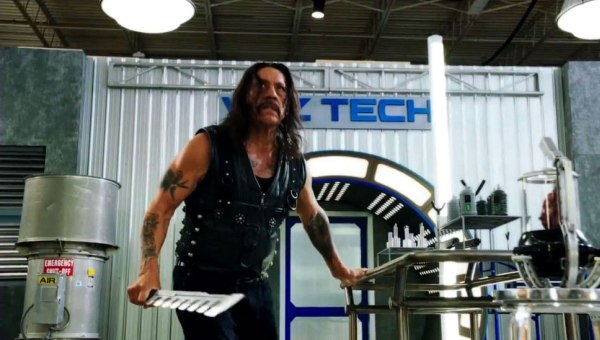 Danny Trejo’s indestructible federale returns in this amusing if nonsensical sequel to the original 2010 grindhouse-inspired parody. Changing tack from the down-and-dirty revenge movies that drove the earlier plot, the inspiration this time around is late 70s/early 80s action films; and director Robert Rodriguez takes his cue from Roger Moore’s Bond era, when gadgets and fantastical action came to the fore.

This entry is basically Rodriguez reconfiguring his family SPY KIDS movies for adults, adding lashings of violence and saucy humour to the mix. The connection is especially pertinent here as former spy kid Alexa Vega pops up in a small role. As with those films (and Bond), events are driven by the standard issue crazed criminal mastermind. Here it’s arms dealer Luther Voz, played knowingly by Mel Gibson; MAD MAX fans will have a ball spotting the occasional nod to his breakout films.

Machete is dragged in to his plot when he and colleague Sartana (Jessica Alba) are ambushed while on a spy sting. The US President (Charlie Sheen, who honours the film’s tex-mex flavour by being credited under his birth name, Carlos Estevez) recruits Machete to bring down Mendez (Demian Bichir), the man they believe has trained a warhead on Washington; but it turns out he is just a pawn in Voz’s much larger scheme.

Honouring the series’ low budget roots as a spin-off from Rodriguez and Quentin Tarantino’s 2007 GRINDHOUSE feature, the film opens with the familiar ‘Prevues of Coming Attractions’ theme before launching straight in to a trailer for the (as yet unfilmed) threequel MACHETE KILLS AGAIN, which looks so outlandish one wonders if Rodriguez is still in full control of all his faculties. It’s worth remembering that he was once seen as a great up and coming talent, but he’s never really bothered to stray far from the spaghetti-inspired origins of his EL MARIACHI movies. SIN CITY is perhaps his most adventurous movie to date, but even that was an adaptation of a graphic novel.

Here he’s on familiar turf once again, dialling up the post-modern machismo and CGI blood that felt slightly over-egged last time around. The bizarre weapons and OTT deaths are entertaining, though they do veer in to NAKED GUN territory at times; this is more or less a spoof in the Zucker-Abrahams-Zucker style (with Sheen capably filling in for the much-missed Nielsen; a re-election advert proclaims his gun-toting president’s success in legalising marijuana in 48 states – “it’s been a groovy four years”). It makes you wonder who the film is aimed at: audiences too young to remember the grindhouse tat from back in the day? Or older audiences who do remember and can see how wide of the mark this tribute is?

What keeps the film from being written off as total garbage, besides the LOL gags and violence, are the continual digs at America’s immigration politics. In both films, Rodriguez constantly satirises the right-wing policies of politicians standing on anti-immigration platforms. Sheen’s president offers Machete an easy route to citizenship in return for heading back to Mexico to sort out a rogue agent there. It later emerges that immigrant Mexican labourers are being abducted to become henchmen as part of Voz’s top secret scheme, because, to paraphrase the film, somebody’s got to do the work. Perhaps there’s hope for Rodriguez yet if the Machete films really are political satires disguised as direct-to-video action fodder; but, to misquote Blackadder, “if they are, it’s a very good disguise.”

One thought on “Machete Kills”