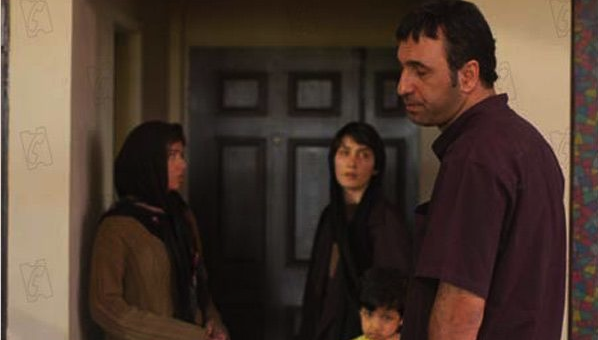 Asghar Farhadi finally gained international recognition with 2011’s A SEPARATION, winner of an Oscar and the Golden Bear at Venice, but he has been making well-regarded feature films for a decade. This year Cambridge Film Festival has given an opportunity to catch up with his 2006 film FIREWORKS WEDNESDAY (CHAHARSHANBE SURI).

The Iranian film industry has been one of the most successful in history, even influencing the French New Wave, but the political realities of the nation have made life difficult in the extreme for Iranian cinema and its filmmakers, with such luminaries as Abbas Kiarostami and Jafar Panahi variously restricted or imprisoned in response to their films. In that context, Asghar Farhadi’s acceptance and rise to prominence both internationally and domestically can be seen as even more of a triumph. Where other Iranian directors and writers have been overtly critical of the country’s regime and its political and religious systems, Farhadi has succeeded in weaving tapestries that more objectively reflect the class systems and intricacies of Iranian life. His works not only couple social issues with domestic dramas based on universal themes, they also employ direction and editing that elevate what could be soap opera theatrics to a significantly higher level.

Farhadi’s script is a superb construct of suspicions and half-finished sentences.

FIREWORKS WEDNESDAY tracks the lives of three married couples over a single day in Tehran. Taraneh Alidoosti plays Rouhi, a young woman on the verge of her marriage. On her first first day as a cleaning lady, she is hired by Morteza (Hamid Farokhnezhad) to clean their flat. Most of the furniture is covered in plastic sheeting and there are broken windows, and before Rouhi makes much progress she is dismissed by Morteza’s wife Mozhde (Hediyeh Tehrani), who seems suspicious of her filial partner. Sensing an opportunity to find out more about her husband, Mozhde uses Rouhi to find out what she can about neighbour Simin (Pantea Bahram), a beautician who has separated from her own husband, and whom Mozhde suspects may be having an affair with Morteza.

Farhadi’s script, in conjunction with Mani Haghighi, is a superb construct of suspicions and half-finished sentences. His characters react in believable ways but not always in the manner you might expect, and this sense of unpredictability keeps both the characters and the audience in a state of controlled tension. FIREWORKS WEDNESDAY is allowed to play out naturally, with Morteza and Mozhde’s domestic situation only gradually revealed, and this slow burn also works in the film’s favour. The performances are also well judged, with Rouhi’s innocence and exuberance balancing the weariness of Morteza and the often fraught Mozhde, and Farhadi knows when to get his camera close to the arguments but also when to pull back.

The final layer of tension comes from the date itself, the Wednesday in question preceding the Persian New Year – the extensive celebrations provide an escalating backdrop of constant noise. It is to Farhadi and his cast’s credit that this background crackle is almost an unnecessary device (though it comes into its own during a tense car ride in the last act) – even without such an intrusion, there are no easy answers or simple resolutions to the drama’s problems. It’s not difficult to see why Farhadi has gone on to such acclaim: the seeds of his subsequent films ABOUT ELLY and A SEPARATION can be seen being sown here.

One thought on “Fireworks Wednesday”