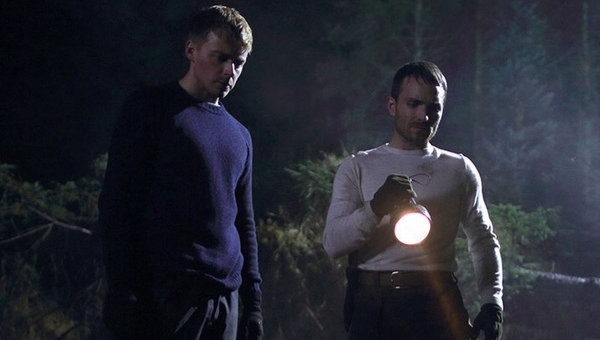 Matt Palmer’s CALIBRE is not the first film to utilise the dramatic setting of Scotland’s Highlands to heighten its own thriller stylings, nor will it be the last. Few films, though, fill in those valleys and crags with both visual flair and characters as compelling as the landscapes they traverse.

Jack Lowden plays Vaughan, taken hunting in the Highlands by his friend Marcus (Martin McCann) as a final hurrah before the birth of his first child. As convention and ominous music dictates, an accident occurs and the two men’s decisions spiral them further down a particularly dark rabbit hole. What follows is a sort of smart, be-tartaned and much better made VERY BAD THINGS.

…a focus on human reactions makes this a surprisingly character-focused film for such a plot-driven story.

Throughout, Palmer’s visuals support an appropriately lean script. The events unfold with increasing horror, and the film conveys this stylishly and without the usual verbal hand-wringing. Given the visceral horrors the visuals could easily have thrown up, it is interesting that gratuitous gore is not generally on the agenda. Instead, a focus on human reactions makes this a surprisingly character-focused film for such a plot-driven story.

Vaughan and Marcus’s choices are slowly but surely restricted and closed down, with the supporting locals inadvertently acting like boa constrictors in wax jackets. The tightening of this vice may happen at the behest of Palmer’s script, but beyond the immediate dramatic imperative the character reactions are what draw the viewer in.

Given so much hangs on the central performances, it is just as well Lowden and McCann are very much up to their roles. The supporting performances of Tony Curran, Ian Pirie, and Kate Bracken keep the wider ensemble’s standard very high. The script and performances do flirt with the antagonistic-local-yokel stereotype that is the downfall of many films with similar backdrops. With the exception of one tyre-slashing confrontation, however, this is thankfully successfully steered through, with some dialogue even assigned (non-jarringly) to exactly why the locals would be so pissed off with their lot in life and city-slick interlopers.

Matt Palmer brings remarkable assurance for a first time director – the visuals are fantastically evocative without being needlessly flashy.

Matt Palmer brings remarkable assurance for a first time director – the visuals are fantastically evocative without being needlessly flashy. The isolated environment corresponds brilliantly with the increasingly isolated state of mind of the protagonist, Vaughan. The lighting of key scenes also serves to elucidate characters’ mindsets rather than the explicit violence the script itself is careful to avoid. The team in the editing suite also ramp up the film’s tension extremely effectively – at face value a second-act dinner scene is very uneventful, but the direction, acting and editing all combine to produce a stomach-wrenching few minutes.

CALIBRE is not complicated from a narrative standpoint, but it is an engaging and intelligent film. It is clearly aware of the tropes that have blighted similar films, knows when to turn the plot thumbscrews, and eschews excessive dialogue for good acting and visuals. The end result is of a very high cal…ahem…standard.

One thought on “Calibre”