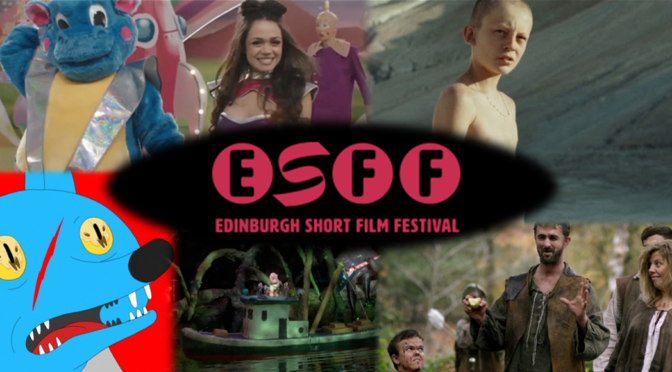 Leading the closing weekend of the 2018 Edinburgh Short Film Festival, The Games We Play leads out an impressively engaging set of shorts highlighting mind games, people toying with – and being teased by – their adversaries, amusing ourselves, and the consequences of them going awry.

RETUKIRI TUKIRI is a visually bright but often comedically dark opening film from Peru. Protagonist Jhony works his days playing the role of Tadeo, a furry mascot-style dinosaur on a children’s program alongside Camila, with whom he is involved behind her partner’s back. The psychological games are firmly in the foreground in Germán Tejada and Daniel Martin Rodriguez’s film, as it appears Camila is more into Tadeo – the dinosaur character – than Jhony himself. Revelling in their power dynamic, Camila’s actions have a psychological toll on Jhony, presented with a bleak comedic approach. There is a strange, absurdist ‘elseworlds’ feel in sequences where Jhony approaches the set of the show, capturing the strangeness of the whole scenario with saturated coloured lighting, and off-beat point-of-view shots. The film takes a turn for darker edge of the comedy at the conclusion, and throughout the shots evoke Jhony’s psychological twists and turns with skill.

THE LEGEND OF BOB LEONARD focuses more explicitly on comedically on toying with those in thrall to our whims. A minstrel bargains for his life with the title outlaw by trying to immortalise him in song. The post-modern humour, combined with some low key but explicit gore gives this short a very Pythons-do-Game-of-Thrones feel. Often extremely funny, the woodland setting, and gang of robbers, also recalls the absurdist socio-realist sections of the TIME BANDITS encounter with Robin Hood.

SCHEIDEWEG depicts the reasons for a teenagers discomfort with the possibility of sex with his female date – not caused by the ‘Truth or Dare’ game they play, but the fact he is instead attracted to her slightly overbearing stepbrother. Although the initial scene and camerawork appears quite plain and staid, it is merely a lead-in to another comedically gifted short, upending that initial lack of flair with an excellently judged progression of comedic payoffs.

DEATH VAN follows a computer-animated musical supergroup of sorts, which – thanks to the imaginative animation – seems completely mad. It is as odd and varied as one might hope, rather than necessarily expect, and rises to the surrealness it pitches in the opening beats of the fictional band’s opening beats with fluid animation and an impressive degree of polish.

The stand out film of the selection is FAUVE, which has been completing a sweep of awards wins at festivals, and it is easy to see why. Jeremy Comte’s film starts off by following two young boys playing, initially in an abandoned train and then lush green surroundings. The opening scenes evoke handheld camera work, with medium and medium-long shots tracking the boys. It has a look not unlike that of Andrea Arnold’s work or the Dardenne brothers’ THE KID WITH A BIKE. However, the widening scope of the boys predicament is foreshadowed by the key contrast between those two and Comte’s short – the anamorphic ratio and panoramic view the film sets out to frame its characters. This is confirmed when the boys’ predicament changes, with their toeraggy-but-harmless games taking a turn for the worse. Moving into a grey surface mine, Comte’s framing makes this feel like an alien, threatening landscape, leaving Félix Grenier’s Tyler to race around within it like the lost, clueless child he is. Returning to the verdant pastures of the opening scenes only underscores the tension that was built up. Paced fantastically, with visuals and story working in great harmony, FAUVE will linger long after Thursday’s viewing.

Moving back to an animation focus, COYOTE is a colourful and visually bright story showing a coyote whose family is tragically murdered by wolves. haunted by this, he avenges them in a surreal and parallel delusion. The animation style – as with all the animation shorts in this year’s festival – shows incredible imagination, mixing the cartoony gore of ‘Rick & Morty’ with the exaggerated violence of ‘Ren & Stimpy’, and director Lorenz Wunderle’s own wonderfully designed sequences.

CHUCHOTAGE is an amusing comedic short, depicting two conference interpreters trying to impress the woman they discover is the only person listening to their translations. There is great back and forth between the leads (Pál Göttinger and Géza Takács). Although it skirts a bit close to the two uncomfortably approaching Andrea Osvárt’s listener, writer-director Barnabás Tóth’s script brings things amusingly full circle, augmenting the central story with some great visual background gags.