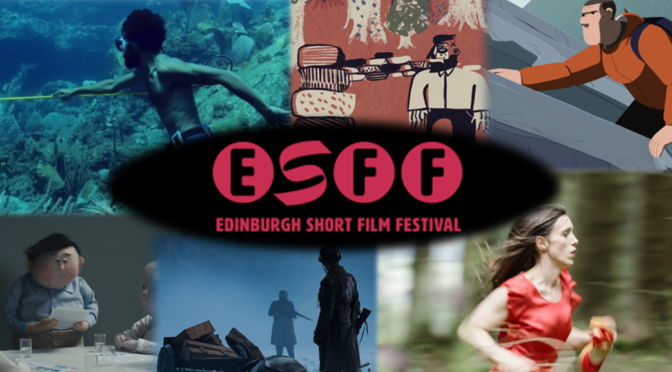 Just before its closing awards ceremony, the Edinburgh Short Film Festival hosts its final screenings programme, presenting a set of films about the anxieties of looking ahead to one’s future.

In looking at the future, we begin with the past, with Rory Byrne’s animated AN ISLAND. The film tells the story of a man climbing the mountainous terrain of a mysterious island in some sort of a pilgrimage, reflecting on the visions of his dead wife and the ciphers of his life on the mainland. Altogether, the film is reminiscent of the dreamlike myth and wordless melancholia of last year’s THE RED TURTLE – though this provides a trippier aspect to its storytelling, Rorschach visuals and all. The fluid animation style is complemented by its elliptical editing, dropping us in and out of the protagonist’s journey atop the cliffs of the titular island, which is ultimately revealed as a construction of his own psyche. On this note, Byrne builds the film to a captivating rapid-cut sequence, traversing both the banal and monumental corners of the man’s memory and situating the psychic event into the cosmic play of life and death, love and loss – everything in tune, under the sun.

Following as the programme’s second animated short, Gabriel Böhmer’s experimental THE FLOOD IS COMING takes a somewhat similar abstract approach to its mythical setup but keeps the surrealist proceedings on terra firma. A forest settler builds a fortification against a flood which he is sure is coming, but one of his eyes pops out and builds its own settlement, taunting him into a rage which will spell his defeat. Unlike the previous entry, the film deliberately employs a cruder animation style, resembling prehistoric drawings and woodcuts, and overlaid with an atmospheric, Nick Cave-esque score and narration. Though the animation style occasionally irritates and challenges our engagement, the sound design and Foley work are one of the film’s more inventive aspects (e.g. an owl’s hoot is produced through some kind of a rudimentary woodwind), which amplify the film’s tactility. There’s difficulty in picking at the logic governing the film, but its symbolism will no doubt offer some clues about its message, while the film remains one of the few to blend personal anxieties with eco-critical ones.

Subsequently, we re-emerge in another forest in Nikolai Knackmuss’ THE FOREST FULL OF RABBITS – a peculiar (live-action) family drama from Germany. It runs in the vein of the German absurdism which has followed the success of TONI ERDMANN, but this finds fewer comedic beats. Kathrin Marder plays Hanna, who attends her brother’s funeral in a garish red dress at the beginning, clearly unable to process her grief, much to the ignorance of her mother and sister. During the grave proceedings, she runs away to the nearby woods, shacking up with an itinerant and eventually organising an impromptu family reunion a few days later. Unlike the traveller of AN ISLAND, our heroine finds no refuge in the future, opting for some strange escapist alternative to facilitate her denial, which ultimately precludes a sense of resolution to the narrative. Despite instilling this sense of lacking in the final scene, Knackmuss imbues the film with a few poetic flourishes: a window frame hangs from a log like a piece of wet laundry, a Labrador runs through the woods with a rabbit in its mouth, and the score is characterised by unordered strokes on the organ keys which effectively accentuate the dissonance of Hanna’s mind.

As a perfect mid-point bridge to broader territory, we have Anna Mantzaris’ stop-motion short ENOUGH. A two-minute affair, this film is about people… giving up. A man falls asleep in the ATM line, a woman throws herself out of the car she’s driving, a man places his palm on the red-hot stove. And so on, with things escalating to either violent proportions, or people falling asleep on the pavement as they wait for the bus. In the context of looking ahead, this is not a cheery vision of either present or future, but it’s effective in drawing out a wince or chuckle in the same way that the vignettes of Roy Andersson might, and that influence is obvious here. Additionally, there is also something of the consumerist critique, mirroring a later film in the programme, whereby the veneer of social etiquette is stripped, leaving the ugly id to play.

Up next is Louise Bagnall’s LATE AFTERNOON, another Irish entry and the Best Animated Short winner at this year’s Tribeca Film Festival. Out of the programme’s animated shorts, this is a highlight and its international accolades are well deserved. Akin to a Proustian reverie (replace the madeleine with a drowning tea-biscuit), it charts the constellation of memories of ageing Emily, wonderfully voiced by Irish veteran Fionnula Flanagan, who sits being attended to by her daughter. While it illustrates the idea that all experiences are transient, the film also demonstrates that our minds are ever ready to dwell on our memories, to be transformed by them, yet always held back by our bodies – idle in a wing-chair in a ward somewhere. Indeed, it’s telling that the animation occasionally detaches Emily’s head from her body as the character moves, as if it were to escape from its gravitational pull. Though the film follows the recurring pattern of looking to the past in anxiety over the future, its cathartic finish is an uplifting beat to the programme’s structure.

“[LATE AFTERNOON’s] cathartic finish is an uplifting beat to the programme’s structure.”

Back on the live-action front, we have Christoph Oliver Strunck’s THE THIRD KING, a German piece which is probably in the running for best-looking short and certainly possessing one of the higher production values on the festival programme. An African-American soldier, Jamar, takes shelter from the forest snowfall in a family’s lodge near the battle-lines, encountering a mother and son who await their own loved one to return from the front. Eventually, Jamar must confront an emissary who arrives at the house, as well as to find his way back to his comrades through the desolate winter. Though Kelvin Burkard’s central performance falters at times, Strunck packages an interesting premise – an appropriation of the Adoration of the Magi story during World War II – with an accomplished aesthetic; tight framing amplifying the suspense, anamorphic closeups of each biting snowflake that falls on Jamar’s cheek, and bluish hues flooding the frame as if it were a hypothermic nightmare. The film flirts with some narrative ambiguity in the final scene, but clearly its objective is cinematic immersion.

With a sudden shift in gear, we get Angela Tiatia’s THE FALL, which takes the conceit of an unbroken sequence; a seamless, latitudinal trek across various tableaus in a warehouse which serves as something close to an Ikea showroom from hell. Images of people going mad in a supermarket across the legato pans of the camera smack of similar iconic sequences in Godard’s WEEKEND and TOUT VA BIEN, as well as this year’s “This Is America” by Childish Gambino. But in truth, the film comes off as intended: a video-art piece, and it’s somewhat hindered by the clear indications that the people onscreen are clearly stage/dance performers, effortlessly pulling off the warehouse choreography with pristine agility. Likewise, it’s critique of materialism and unbridled consumption is as subtle as a Jackson Pollock. However, its technique is admirable, with each tableau hitting its mark perfectly and revealing more and more detail to its central thesis, coupled with a sense for brevity that makes for a good respite between two lengthy, and highly cinematic, meditations.

Following this, we see the return of French production company Les Valseurs with Hugo Rousselin’s VIRE, another story set in Réunion after the premiere of ARTHUR RAMBO on the Tribes and Tribulations programme. A fisherman starts encountering a deep-sea revenant in the guise of his deceased brother, while his father withdraws in sorrow from the world. Though we’ve seen this type of thing before – with the second film in fact – VIRE demonstrates a filmmaker who understands the necessity of withholding enough detail to transmit the film’s emotional core through visual ambiguity and the subtleties of the performances. Yet again, the French producers give us a film of great confidence and authority in its storytelling, bolstered by an understated performance from lead actor Julien Beramis as Isaac, who constructs a poignant portrait of grief and overcoming. Furthermore, the film shows off a remarkable technical aptitude, including some stunning underwater and night-time photography.

Finally, we have a concluding animated effort: Neth Nom’s CGI-rendered SONDER. In many ways, it marks the spiritual conclusion to an animated trilogy on the programme, preceded by AN ISLAND and LATE AFTERNOON, as it concerns a chief protagonist battling with the dissolution of a familial saga, again in some kind of dream tapestry of his own mind. Though the animation is quite basic with regards to some aspects of its design, the facial features are just right; their fluidity and precise contours express every single moment of the characters’ feelings of fear, anger, and regret, making its tear-jerkery as authentic as that of the kind that’s come before it. Moreover, while the road to solace and ‘looking ahead’ proves to be the film’s endpoint, it briefly forgoes a linear chronology for a more emotional expression – sifting through fantastical environments and timelines and staging the main character’s emotional conflicts on a mythical scale, before all anxieties dissipate to a wonderful fade-to-white.

As with previous nights, this final set of films is another great bunch and their precise arrangement is likewise thoughtful, some often mirroring others in scope and imagery, forming an inter-dynamic exploration of either an embrace, or rejection, of what is to come.