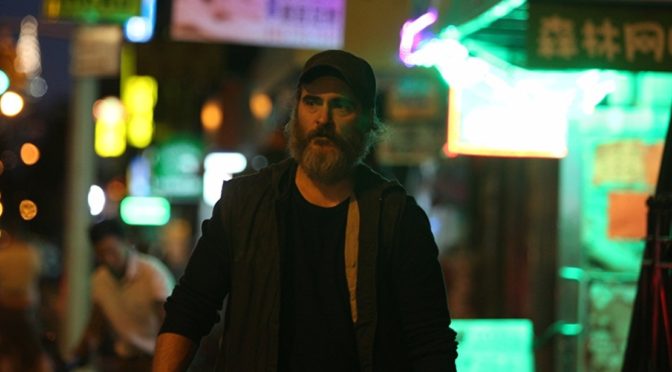 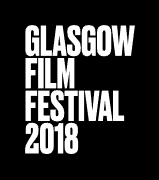 YOU WERE NEVER REALLY HERE confirms Lynne Ramsay as one of the finest directors currently working. An arresting, disorienting and traumatic film, Ramsay’s latest work is a difficult but incomparable thriller.

Joaquin Phoenix leads as Joe, a violent enforcer tasked with recovering a young girl – Nina (Ekaterina Samsonov) – from a child abuse ring. His seeming psychosis, underscored by personal trauma (both home and military), is illustrated as he executes a revenge mission against perpetrators determined to keep a hold of the young girl.

An oppressive atmosphere evocative of Joe’s mindset is the primary objective of Ramsay’s stylistic decisions, and she achieves it with flair and skill. YOU WERE NEVER REALLY HERE is a tyrannically taut film, that often feels like a 90-minute heart attack. The idea that any film – even one of Ramsay’s own – could make WE NEED TO TALK ABOUT KEVIN seem relaxed is absurd, and yet here it is.

“The idea that any film – even one of Ramsay’s own – could make WE NEED TO TALK ABOUT KEVIN seem relaxed is absurd, and yet here it is.”

A key component of this is Jonny Greenwood‘s score. The level to which it blends with the visuals is as compelling as his scores for WE NEED TO TALK ABOUT KEVIN and THERE WILL BE BLOOD, but the way it elevates the atmosphere exceeds even those efforts. The strained siren feel and discordant sounds, stretching viewer composure to the same breaking point Joe is enduring, form one of the pillars upon which this film stands.

Ramsay’s own eye for unnerving detail is another such pillar. Simple touches such as Joe turning book pages the wrong way set the observer off balance, the visuals and flashbacks to Joe’s traumatic past are as discordant as Greenwood’s soundtrack. The nocturnal grime of New York seems heavily inspired by TAXI DRIVER, but the tense modernity of the setting is entirely Ramsay’s own.

The third pillar – stabilising this particularly uncomfortable filmic stool, if you will – is Phoenix’s performance. Every scene that he carries solo feels deeply uncomfortable. His apparent instability is mirrored in the film’s construction, and the violence he portrays – both physical and mental – completes the film’s vision.

“Lynne Ramsay is a visionary filmmaker who really is here, and long may she be.”

There is no doubt YOU WERE NEVER REALLY HERE veers into narratively opaque territory frequently: as a result it perhaps doesn’t resonate as clearly as RATCATCHER, MORVERN CALLAR, and WE NEED TO TALK ABOUT KEVIN. It is less accessible than any of her previous features, but as a cinematic vision it is perhaps the pinnacle: the squalid beauty of RATCATCHER; the tense psychology of WE NEED TO TALK ABOUT KEVIN; the subtle strangeness of MORVERN CALLAR. All are reflected and elevated here. Lynne Ramsay is a visionary filmmaker who really is here, and long may she be.