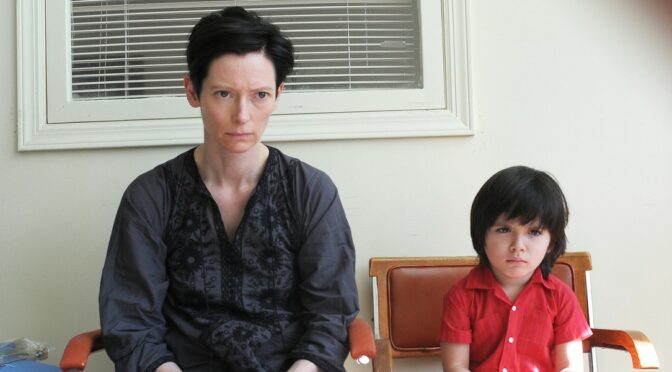 A truly unsettling film, Lynne Ramsay returns to the big screen in spectacular fashion with WE NEED TO TALK ABOUT KEVIN; her directorial vision of this reverse-Oedipal nightmare is a fantastic film based on Lionel Shriver’s supposedly impossible-to-film novel.

Tilda Swinton holds the central role as Eva, as we jump between the unfolding present and the past in her memories – the central defining event being a horrific act of violence committed by her son, Kevin, at his high school. If one was to pigeonhole the film into a genre it would be psychological horror, but that would be simplifying the strands of Ramsay’s film (and, although I have not read it, presumably Shriver’s novel) too easily. The child referenced in the title is not Damian of THE OMEN – the horror here lies in the unravelling of a mother’s mind, and her struggle to understand what drove her offspring to horrific acts and sociopathic tendencies.

Underscoring the whole affair is a nature versus nurture debate, from which Ramsay remains impressively stand-offish. In early scenes we see the apparent disdain Eva holds for the young Kevin even before he was born – as other expectant mothers chat animatedly and show off their baby bumps Eva shies away, hiding hers under baggy clothing and a disappointed gaze. Never explicitly falling either way, much to do with our subjective viewpoint through Eva, the film also depicts the apparent tendency for Kevin to wilfully toy with the emotional states of those around him. For how much of this is Eva truly responsible? Tilda Swinton’s remarkable performance leaves it very much up in the air.

“…the horror here lies in the unravelling of a mother’s mind, and her struggle to understand what drove her offspring to horrific acts and sociopathic tendencies.”

Both actors who portray Kevin, particularly Ezra Miller as the teenaged version, are superb. Miller is excellent in conveying the sociopathic teenager. His unsettling conversations and acts around his mother bring a horrible sense of unease without ever slipping into clichéd celluloid psycho territory.

The amount of blood symbolism laid on by Ramsay is impressively unrelenting, even if some of early scenes of the toddler Kevin risk falling into the evil-toddler stereotype. Overall, Ramsay has put together the film in a structure that allows the actors’ performances and the more nuanced areas of the plot to come shining through. Even though Ramsay has layered the film with colours and striking vision, it resides firmly in shades of morally ambiguous grey.

4 thoughts on “We Need To Talk About Kevin”