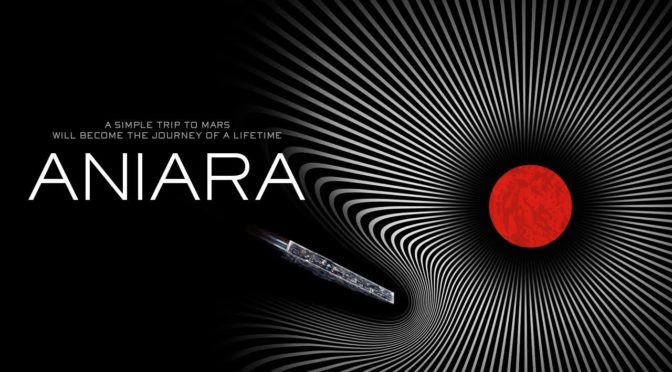 ANIARA was released in the UK on August 30th after a successful festival run. The film is continuing in many cinemas and is available on digital download. The co-directors and actor Arvin spoke to me about the production of the film, which was adapted from a 1950s Swedish science fiction poem.

Jim Ross: Congratulations on the film, I thought it was really superb. It’s based on a poem from the 1950s and, as I understand it, it’s been adapted into several different mediums – I think there’s an opera, and some other pieces of work – but this is the first film adaptation. How did your team come to be involved with that?

Pella Kågerman: Exactly, it is has been adapted to those various formats but never film. I think one reason is because Sweden has not been a strong sci-fi country, there’s not been many space movies at all. So we don’t come from that tradition. And it has been so expensive – before it was basically impossible, I think, that this very well known poem could be turned into a film. But for me, personally, I grew up being very close to my grandmother and we read a lot, and we would role play the books we were reading. We went to see one of the theatre plays of Aniara, and the night after that she ended up in a hospital. As she was getting better, we started to role play Aniara. We pretended that the big hospital she was seeing was the spacecraft, that the patients were the passengers, and the doctors were the crew. That’s when I felt like the poem actually really got to me. I felt like I understood all the layers of it, too.

JR: I certainly get the same from the film that was a lot of different layers within that piece of work. With regard to the time jumps in the script: they start of as fairly small time jumps, and then you basically get exponentially larger and larger. Does that come from the poem? There were certain things from the poem you didn’t adapt or updated. What was it about these time jumps that made you want to include them? It makes it a very ambitious structure for you to follow as filmmakers.

Hugo Lilja: The timestamps are partially in the book: the shorter time jumps aren’t in the book. I think they have larger jumps in time, up until the 24th year when everyone gives up, basically. So we also shorten some of them: on the 20th year, they have the celebration, but we have it on the 10th and so on.

JR: What was it you were wanting to achieve with that chapter structure you end up with? As filmmakers, how did you feel that was an important to the story?

HL: I think time is one of the core themes of the story, and it also has to connect with the idea that the ships in ANIARA, not just Aniara, are built for interplanetary travel. So, a three-week journey, when you miss your target and you start to getting out into deep space. You float into a frozen state, because Earth and the Sun diminish pretty fast, but then the stars seemed to remain the same. So you needed the time jumps to portray, also, distance. In a way you’re not getting anywhere, because it’s such huge distances, but there also things happening to the people stuck in this world.

JR: A lot the scenes with the crew were filmed on a ferry, and the areas of the ship look very much like a shopping mall. How did you go about scouting locations for this because as I as I understand it, you did a very small amount of studio work. So it was all very dependent, in terms of the look and feel, on you finding the correct locations.

PK: In the end, we found out that it was actually one architectural firm that had made the interior for most of the locations that we ended up with. So we were we had this idea that in this parallel universe world that ANIARA takes place, wood is one of the fanciest materials that you can have, because it doesn’t exist anymore, because Earth is basically ruined. So we look for a lot of interiors that had wood on the walls and stuff. That was one of the key elements that we were looking for. It was actually me going around in the car, with [Hugo] and visiting all the shopping malls in Stockholm.

HL: Pretty early on, we found one that had a structure we liked in it also. Together with an architectural group, they helped conceptualise Aniara based the functions and descriptions in the poem. They also helped us we just started the interiors, and we did exterior of the ship, so it would match those.

PK: At the beginning, you see a space elevator going up to the ship. We had found this tourist boat going around in Stockholm, and we knew that we were shooting the interior of the elevator in that boat. So then they would match the elevator, to be built, to seem like that little boat. That’s kind of the way that we worked, and it felt really important to use actual locations and dig into the science – the space elevator is something that they are talking about now that could be a possibility. So, where we could be scientific, we were.

JR: You said that Sweden doesn’t really have a tradition of telling sci-fi stories. The source material for ANIARA dates back to the 1950s, and although quite a lot of English language sci-fi exists before then, a lot of it came out of that period around the Cold War when people were worrying about the future of humanity. Is there a particular reason there isn’t more sci-fi film from Sweden, if the source material is there?

HL: I think money is part of it. It was too expensive before and now it’s not for visual effects and such. So you can make more of those stories.

PK: It’s also not a coincidence that we choose to shoot on locations. To have built those locations would have cost a fortune. It’s also down to a lack of somewhere like Shepperton Studios, where they shot 2001, for instance. 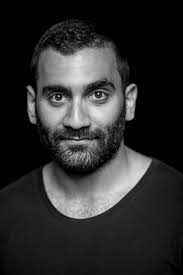 JR: Arvin, first of all, congratulations on your role in the film. One of the things I asked your co-directors about was the time jumps in the story. You’re in the majority of those segments – did you feel like you had to reinvent the character slightly across the script, and work with the other actors on that? Some of these time jobs are extremely large, and the character needs to not look like a departure but there needs to be some sort of progression.

Arvin Kananian: Definitely. I actually actually spent some time in an elderly home, in preparation for this, just to seehow people move when they’re really old. My age [in the film] is before that, but just to just to sit and study the extreme. What I then tried to do when [the character] got 10 years older was reinvent the physical bit slightly and, for instance, the alertness of my eyes. To not be as fast or as interested with my eyes. Top have a less interested expression was something that I worked with little more tired. Also slowing down your movements a little bit and becoming a little bit more stiff, especially since we’re on the spaceship – 10 years on Earth maybe wouldn’t make you as stiff. But yeah, on on the era that would make me so much more stiff. [Emelie Jonsson and I] talked about it a little bit to find a similar pace between ourselves, and in the scene we played off each other, but the preparation was all on our own.

JR: How much of your character came from the poem as opposed to the script?

AK: The poem has one page solely describing the character; the captain. The poem describes the captain as the darkest thing on earth, the most evil person. I took that as “Okay, this is quite extreme”. Then, I adapted that, because I have to always make sense of my own character, I have to I have to make sense of their decisions. So I took the script decisions and adapted that to a person. Hugo, Pella, and I decided together that he has a military background. That means that everything he does, he does for his soldiers, in this case that being the people on the spaceship. He did it for the people, but then he got the weight on his shoulders and made worse decisions, but he thought he was doing the right thing.

JR: There’s a lot of contemporary resonance, where it seems like a lot of societies around the world are straining at the edges or creaking for political or environmental reasons. You find yourself playing the authority figure in one of those societies. Did that affect how you approached the role?

AK: Boris Johnson! Yes. Well, what you see when you look at them, and the decisions that they make, the things that they say, the ways that they say them, and the lies that they tell – you’ve feel like you’ve been in a meeting, where you found out some really horrible shit that you don’t want to share. You know something really, really horrible. I felt that the captain obviously knew something that he had to hold back on to keep control of the ship. It’s a really interesting reference to those people – what they know, is not a secret, obviously. We all know it, but they seem to have that look in their eye that suggests there’s some dark shit inside.

JR: There’s a lot of sci fi out there and you can see little inspirations here and there, I think, in the film, but something I think ANIARA does very well is the this idea of the society breakdown. Did you have much of sci-fi inspiration yourself from a character standpoint?

AK: No, I actually didn’t refer to any sci-fi in my preparation, because I didn’t feel that this was sci-fi. My approach to it was that this is on a cruise ship, a big shopping mall. Except for the fact that we have space outside the windows of it, it didn’t feel like it was space. I didn’t want get influenced by too many sci -fi characters and stuff.

JR: The best sci-fi stories are human stories that use the elements of sci-fi to amp things up a little bit. Did you refer to any other mediums or people to bolster that first part?

AK: I referred to a lot of literature, but not just that. I did some military training, and got to follow this Lieutenant for a couple of weeks. They were very much an inspiration to the posture, not just physically buit in myself as well. Confidence is the captain stuff, they were very inspirational to me on that.

You can listen to the TAKE ONE team of Jim Ross, Elle Haywood and Marc Nelson review ANIARA in our EIFF 2019 podcast special.