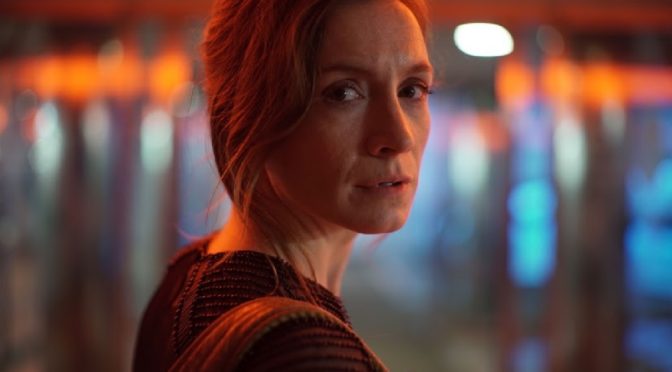 Based on a sprawling poem from 1956, Pella Kågerman and Hugo Lilja’s ANIARA is a slickly allegorical take on the doomed space flight archetype pervasive throughout sci-fi. The film’s themes seem grounded in an examination of what gives meaning and hope to people, and whether humanity’s ugliness outweighs the beauty. As a result, it lacks much closure or catharsis but perhaps that is the point.

Emelie Jonsson leads the cast as ‘MR’, aboard the Mars-bound spaceship Aniara, a vessel akin to a combination of Starship Enterprise and fancy airport’s departure lounge. Aniara is to take a population of settlers on a three-week voyage to their new home. However, a collision with space debris knocks the ship off course, and to prevent tragedy all the fuel must be ejected. The narrative then follows MR and her fellow residents through a series of time jumps – framed as chapters – as they try to cope with the situation’s despair and return to (preferably red) terra firma.

After the incident, a key part of the early narrative focuses on MR’s job as a ‘Mimarobe’: custodian of a sentient AI space within the ship named MIMA – seen primarily as a rippling set of lights suspended overhead – that function as a combination of the Star Trek Holodeck and the numerous memory-to-VR interfaces of sci-fi and fantasy stories. Faced with the yawning chasm of space stretching out in front of them, the passengers rely more and more on the opportunity to experience the virtual reality of Earth “as it once was”. In a grim parallel of the planet the technology recreates, warnings of the strain this places on the machine go unheeded.

The broad concept will feel very familiar, but the particular approach taken by Kågerman and Lilja, small script details, and production design elements means ANIARA stands out in a crowded genre landscape. We never see Earth, but its increased harshness is clearly reflected in the dampened mood of the passengers and frequency of scarring amongst them. MR’s roommate explains the vastness of space – and the extent of their isolation – with a beautifully simple analogy.

“The broad concept will feel very familiar, but the particular approach taken […] means ANIARA stands out in a crowded genre landscape.”

In this manner, the exponential growth of the time jumps (Hour 1, Week 3, Year 3…) reflects the growing existential crises experienced by those on board. At first, there is misplaced blame put upon those lowest in the social ladder, MR chief amongst them. At every stage, the accelerating collapse of the enclosed society of ANIARA can be considered allegorical for Earth and humanity. The mild concern is quelled, before turning to a complacency, reliance on mysticism, authoritarian control, and futile attempts to resolve a situation that has long since gone south.

ANIARA is certainly not the first sci-fi film to present a thesis on how humans react to a hopeless future (nor is it even the only one that debuted at the 2018 Toronto International Film Festival, where HIGH LIFE premiered). A near blow-by-blow account of that spiral is where ANIARA makes its impact. The tune of humanity’s real-life course is heard clearly, but not at the expense of drowning out MR’s central story. Through Jonsson’s central and commanding performance we can find the best of our fellow men and women, gradually being worn down by those around her – each element on their own is benign or controllable but together they chart a doomed course both literally and metaphysically.

The film’s brief coda finalises the timespan at nearly 6 million years: well beyond the span of human history. ANIARA does not offer a resolution, nor hope, nor catharsis. The film presents, if anything, a warning: our existence is a universal privilege to cherish, not a selfish entitlement to be hubristically guarded.

ANIARA screens again at Edinburgh International Film Festival on Sunday June 24th, 1pm and will be released in UK cinemas on August 30th, 2019.

One thought on “Aniara”