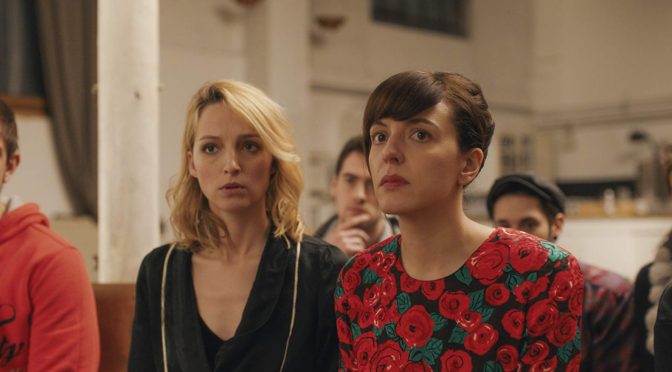 The dark comedy has become a particularly messy genre throughout the 21st century, failing to make any real impact if it can’t trace its style back to the works of The Coen Brothers, Hal Ashby and the gothic-angst collection of Winona Ryder films. EMMA PEETERS does not have the most aesthetically remarkable format – flowing through, at some points, a mesh of jarring, short-lived genre shifts – but it shines through inspired writing and unrestrained innovations. While the themes and discussions in the centre of Nicole Palo’s screenplay lack distinct novelty; the remarkably fresh models that dissect them, launch Palo’s direction into a pronounced auteurship: thriving through a poetic genuinity, rather than an anti-foundationalist gloss.

Failing to get her acting career off the ground, Emma Peeters, becoming increasingly dissatisfied with her day-job, relationships, and mundane routine, decides to end her life on her 35th birthday. Convinced that the age of “35 is the expiry date for an actress” she loses all hope in achieving the dream she has longed for, and ached over for the majority of her adult life. But, the proceedings to her carefully planned suicide are met with an array of obstacles; from the method, to the funeral arrangements, and finding a new owner for her beloved cat, Jim. While the fundamentals become more complex than anticipated, Emma remains emotionally invested in her decision; until her relationship with Alex, the funeral home employee, excels formalities, and introduces her to other passions beyond the stage curtain.

EMMA PEETERS is far from derivative; while it possesses the shades of ’90s cult characterisation, with the lead’s personality and motivations evolving in an atypical fashion to the film’s overall structure, the edges of Palo’s composition flourish with a compelling sharpness of acute mental illness. It’s extremely tasking to find a balance when suicidal ideation straggles through comic undertones, and Palo’s description is far from a safe semblance of causality, nor is it a desired format for any in-depth analogies. However, Palo certainly re-defines boundaries in terms of the themes of mental health and suffering, and while her characterisation fails to evoke any clear polarity in connection or relation, it earnestly asserts the paradox of mental illness’ depiction in film: sorrow is not always formed from a desolate abyss, yet despite its complexity it is expected to take consistent roots. Palo’s ability to construct a different story of suffering, void of romanticism, propels her from similar compositions which fail to distinguish Coen’s nihilism from Nietzsche’s original text.

Palo’s direction manages to transition smoothly from morbid scenes to the phlegmatic vista of the Parisian canal and towns. Despite the contrasting tones, it syncs in a chaotically alluring blend of haunting wonderment. Unlike the common dark comedy set-up, there is no real flamboyancy, Palo strives through simplicity in a way that highlights the creative poverty of everyday life; through conformity and survival – a combination that is proclaimed, can be quick to deteriorate. The subtle distinctions between aesthetic and genre are paramount in Palo’s execution, she sharply formulates the idea that the darkest elements of existence are formed from the same landscapes that generate fulfillment for another. She refrains from making her lead protagonists universally likeable; but while Emma and Alex do not conform to our rom-com stereotypes, they reach the spectator through existentially unpredictable harmonies. From this refreshing formula Palo highlights the beauty of cultural negatives, she expresses the freedom that comes with the idea of tabula rasa, the utopic essence of leaving regrets and failings behind. From the films fueled by state doctrines and oppressive narratives, to the films of culturally evolved regions: there has always been a shared distaste for capitulation. But, as Palo’s feature exclaims: there is strength in giving up, and not all dreams are supposed to be eternally chased.

Monia Chokri’s performance as Emma encapsulates the fragility of her sense of self; through streams of hostile frustration, to states of compromised nonchalance. Chokri realistically captures the gordian-knot of suicidal ideation; the reality behind the romantic notions: that even in death you can’t disappear, the pain of normalcy follows you to the cemetery, with a gravestone that is lost in the background of Jim Morrison’s embellishments. In amongst the desolate mood of Chokri’s troubled portrayal, she does not allow the spectator to wallow in pity, instead she illuminates the reality of the eccentric realms within the fractures of identity crisis.

The performance of Fabrice Adde as Alex, the oddball funeral home worker, creates a creative depth to Palo’s screenplay. Far from the romantic hero, Alex decides that it is not his job to keep Emma alive, but rather to make sure she goes out in a blaze of contentment. And, with Adde’s inapt, yet humorously wholesome charm, it’s difficult to disagree.

Nicole Palo’s EMMA PEETERS pushes the boundaries and expands the criteria for dark comedy success; creating a foundation that balances a thematic realism through a quirky approach to narrative form. EMMA PEETERS is a melting pot of Jeunet’s whimsicality, Ashby’s rebellion, and Ponsoldt’s sincerity. But, while influence resides behind the lens, there is no denying that Palo’s stamp on dark comedy is well-defined and bravely unique.

One thought on “Emma Peeters”