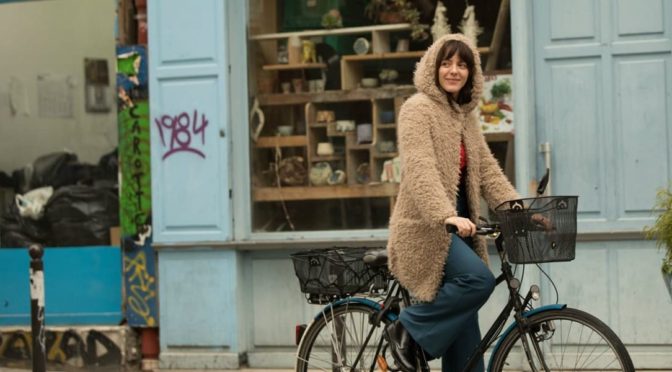 Emma Peeters has enriched the screen at Raindance Film Festival in London, and director Nicole Palo’s feature has been well received, with her winning the Jury Prize in 2018 for Best Director.

Steph Brown had the chance to interview Nicole, and ask her some questions about the film, her process, and her future plans in the world of cinema.

Steph Brown: What inspired the screenplay?

Nicole Palo: [Laughing] Everyone always asks me, “is it autobiographical”? I had this question yesterday after screening it, but people don’t really dare ask. But actually, it is really based on a period of my life when I was quite frustrated because I was trying to make another film after my first feature film, and nothing was going through. I felt like I didn’t exist, and this huge frustration led me to invent a character who decided to let go of everything for real, and actually it was like therapy for me, y’know, putting a lot of irony into my character. I put a lot of myself into the character, all my sores. Is that my real life story? It came out of my own frustration, as I was trying to let it go, and it worked for me and I think it sort of works for the audience as well – if you still feel good after watching the film, sometimes watching a miserable person on screen makes you feel better.

SB: Emma Peeters has quite a strong connection to realism, that we don’t see with many dark comedies. Was it important to you to keep the world within Emma Peeters relatable, and one that audiences could really connect with?

NP: Yeah, that’s funny that you say it’s realistic cause that’s what I thought as well when I was writing it. I had many people in my crew asking me, is your world realistic, or not? Because they felt like it was more cartoonesque at some points. But, to me, it is anchored in reality. I mean it could happen, everything that I show is not science-fiction. But, there is a kind of fantasy, a fun way of looking at things. I mean it is very much a subjective film in the sense that it’s filmed in the way that Emma sees the world, so it would be completely based in reality if we look at the world through her eyes.

SB: Was it challenging to keep the balance between drama and comedy, when exploring a heavy subject matter?

NP: Yeah, it was actually pretty difficult to write, I didn’t think it would be so difficult when I started because I really wanted to have comedy that rang through true as well. I really wanted people to relate to these feelings as well, so I had to find the right zone. It wasn’t easy, but I actually discovered something writing; that when I was talking about suicide and death I had to have a comedy scene, but just before and after that, there needed to be some emotional scene so you could actually believe that she was going to go through with her suicide project. It’s difficult to make people believe she was going to do it and at the same time be able to laugh about it.

SB: What was your process like when writing and directing simultaneously; did you have quite a vivid idea of what you wanted Emma Peeters to be in the early stages of development, or did you start with a premise and explore different ideas while filming?

NP: I was pretty sure from the start that it was going to be a story about a girl who wanted to commit suicide – I won’t spoil the end for people who are going to read the interview and haven’t seen the film yet – but I knew from the start; all the plot points, and I knew I wanted to make a comedy, with some dark humour and irony, but I knew it was going to be a comedy, and from the start I wanted it to be very light in colour, to have a contrast with the film; through the images of Paris, I wanted it to be very nice looking. Some people talk about Amélie Poulain, but in fact I took it more in reverse; Amélie is a very sweet film – she skips stones on the water in the canal in the summertime, my version of her would be more likely to drown her cats (laughing). She’s a bit more, let’s say darker than Amélie, but overall, from the start, I wanted to have something light.

SB: Emma Peeters addresses the complexities and realities of depression and suicidal ideation. What public stigma of mental illness did you want to challenge?

NP: It’s funny because I never thought of it as mental illness. One day I read an article saying that my film was talking about mental illness, and I was like, no? Well depression in a way is a mental illness I guess, but I’ve never really seen it that way, what I mean is, for me it’s just different points in your life. I don’t believe in mental illness, for me there are different kinds of people in life with different sensitivities, and I don’t know why society always has to label things, like normal and not normal, so I guess I am not normal but I just want to be the way that I am.

SB: When you were writing the character of Emma, what were the most crucial traits that you wanted to amplify, to distance Emma from rom-com stereotypes?

NP: I didn’t want the character to be someone from a typical rom-com. First of all she’s quite dark, she doesn’t want to talk to anyone, and she’s shut in. We see from her suicide project that she’s far from a typical character, but then she actually meets someone, so I had the biggest opposition of someone wanting to die and finding love at the same time. This was the difficult part when writing, because love can really be an obstacle to death, but I think that is original in its own way. Also, the character of Alex is completely awkward, I don’t think he’s the typical rom-com boy who’s in love either, I think they’re both atypical.

SB: The character of Alex is so far away from traditional heroic characters that often dominate love stories. What were the most important traits you wanted to get across with this unusual character?

NP: I think I wanted him to be a comic relief basically for the film. And, he was really good at that, actor Fabrice – he has this innate sense of humour and sense of comedy. Basically I wanted him to be weird and to be himself, because as an actor he is quite close to the character, and at the same time I wanted it to seem truthful, I didn’t want an exaggerated character and I didn’t want to force comedy either, but to him this character came naturally.

SB: How do you think people will react to Emma Peeters, specifically Emma as a character?

NP: I didn’t really know how people were going to react, but now that I’ve seen many people watching the film, they actually really like her. I was always scared that maybe she would annoy some people, because she’s self-centred, she’s always thinking of herself and career, and she’s not really smiling for the first half of the film. I really was scared that people were not going to think she was sympathetic enough, but I see that many people seem to relate to her and they relate to her drama.

SB: As an accomplished filmmaker at the beginning of her career, what advice do you have for aspiring filmmakers just starting out?

NP: [Laughing] Hang on, hang in there, it’s going to be a long journey. It took me ten years between my first feature film and this one, and at some point I really thought that I was not going to be able to do it. And, even though you’ve made things it’s never a sure path, you will probably struggle, I have presented to commissioners who will at first say no because they can’t understand what it’s going to be. You just have to believe in what you want to say and you have to just hang in there, and continue pushing because at some point people are going to notice. And, the other thing is to choose a topic that you actually feel a personal urgency to tell, because I think, sometimes, young filmmakers make the mistake of thinking what does the industry want to see, or will the commissions accept this project, instead of looking into themselves and what they have to say, and what new vision they have on the world. That’s the two things I would say.

SB: Are you working on any other projects at the moment, or anything planned for the near future?

NP: Yeah, I am actually in the process of writing my next feature film called, provisionally, Girlhood. And if you’ve seen the film Boyhood, it’s like that. I’m going to do a coming-of-age film with a girl through the ages of 5 to 20. The whole idea is that this little girl looks like a boy, and she’s being bullied by other children because she looks like a boy. And for her, in fact, it’s the same; being a boy or a girl, she’s just a human being. She then realises later on that there are actually differences that society imposes, that they will expect you to behave differently because you are a woman, so the idea is like the sentence from Simone de Beauvoir “you are not born a woman, you become one.” That’s the thing I want to defend, and it’s not about sexual orientation at all, it’s just the idea of gender; if we weren’t told how a woman was supposed to act, then I think in a way, things would be very different, and you wouldn’t have to prevent yourself from dreaming. My character wants to become a music composer but it’s something that very, very few women do in fact, and that’s too bad because we’re all capable of the same things.