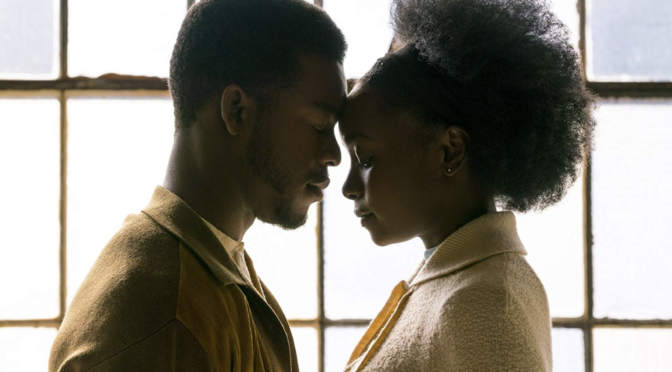 It is a shame that more people probably know MOONLIGHT – Barry Jenkins‘ second feature film and Best Picture winner – as the unfortunate punchline of history’s worst Oscars cock-up than for the wonderful and intimate piece of cinema it is. The follow up – IF BEALE STREET COULD TALK – shows all the elements that made MOONLIGHT great, even if reverence for the James Baldwin source novel means it doesn’t quite glide off the screen with the same level of elegance.

The film is based on a Baldwin novel of the same name, and follows two young lovers – Tish (KiKi Layne) and Fonny (Stephan James). Tish is pregnant with Fonny’s child, with him imprisoned falsely for an alleged rape, a result of a grudge held by a racist police officer press-ganging the victim into wrongly identifying him. The narrative jumps between the legal efforts to free Fonny, and flashbacks to their life and growing love in the lead up to his incarceration.

As with MOONLIGHT, Jenkins does an incredible job of creating audience empathy with the characters. Protagonists looking straight down the camera – not always delivering dialogue – is a familiar motif and one that immediately connects us with them. The opening shot tracks the central couple as they walk through New York’s Riverside Park, twirling in the branches above their head. Continuous tracking shots are a common way to show off directorial flair, but the dream-like romanticism these unfamiliar pirouettes lend to Jenkins’ opening shot sets the tone immediately. The string-filled score from Nicholas Britell (whose work was one of the more obvious successes from the very different recent release, VICE) is even more important here than it was in MOONLIGHT. The score swells when the central pair are on screen together in a park illuminated by walkway lights, and Britell’s music rises just as the camera floats in from a medium long shot to nearly close up, always centred on the two.

“As with MOONLIGHT, Jenkins does an incredible job of creating audience empathy with the characters.”

This all works very harmoniously with the cinematography decisions of James Laxton. The film seems to have the textural depth and tangible feel of large format film stock, but the clarity and crispness of modern digital formats. It evokes the very clear sense of time and place the story requires, but a social situation underlining the story which reaches out to modern audiences.

The backdrop of the story contains a fair number of strands: institutionalised racism, differing class aspirations, wrongful and disproportionate imprisonment of minorities in the USA (especially black men), the treatment of sexual assault victims. All are very well dealt with from a visual and tonal standpoint, with some integral and none feeling tacked on. It’s a little sad, therefore, that IF BEALE STREET COULD TALK doesn’t embrace the skill of its own creators – a dovetailing of the direction, cinematography, music, and script – to its fullest degree.

“The film seems to have the textural depth and tangible feel of large format film stock, but the clarity and crispness of modern digital formats.”

There are frequent voiceover monologues (more towards the start of the film) where KiKi Layne delivers story and her inner thoughts. These are drawn from Baldwin’s prose, but still feel slightly at odds with the flow of the images and sounds on screen. So, too, are the still images evoking the struggles of Stephan as a black man, using a comparison to America’s past. The voiceover sections presumably come from a reverence for the novel and the author (indeed, the opening title card makes no bones about the source, and even fades Baldwin’s name out slower than the quote). It’s strange the film chooses to fall back on these so strongly, especially given the bold, evocative and very photographic moments that litter all of Jenkins’ work, particularly the collaborations with Britell (music), Laxton (cinematography), and Nat Sanders and Joi McMillon (editing).

It’s a minor drawback, however, to an excellent film. The acting displays the same light touch as Jenkins and his crew. There are plenty of raised voices in an early inter-family conference, but much is communicated with the editing, the actors expressions and slight shifts, with special mention for Regina King in the meatiest supporting role as Tish’s mother, Sharon.

It might not shine as brightly as MOONLIGHT, but IF BEALE STREET COULD TALK is a wonderful film. It doesn’t just talk, it can walk the walk as well.

Our thanks to the Cameo cinema in Edinburgh for enabling the review. The film is screening there until February 21st at least at time of publication.

One thought on “If Beale Street Could Talk”