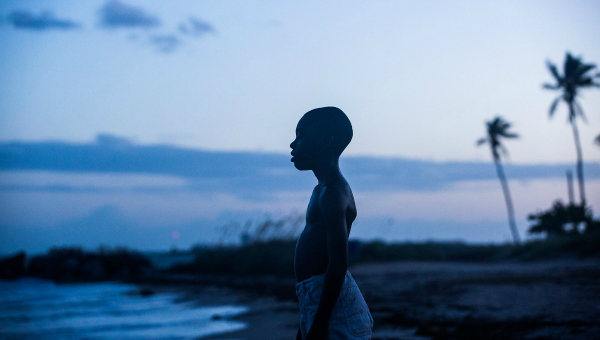 MOONLIGHT is much like the name would suggest – understated, but illuminating and often beautiful. Barry Jenkins‘ film is visual storytelling of the highest calibre, and his actors judge their performances perfectly. There are no histrionics, no showboating, no grandstanding – simply characters brought to life with incredible skill.

Chiron is a young African American picked on by his peers in the opening scenes (Alex Hibbert) for being homosexual. He is found hiding by Mahershala Ali‘s Juan, who strikes up a bond with the young boy alongside his partner Teresa (Janelle Monáe). In parallel, he copes with the shadow of his drug-seeking mother (Naomie Harris) and his confusing personal relationships with friends and enemies in his peer group. Split into three chapters according to a name associated with him at a given age, an actor portrays each – ‘Little’ (Alex Hibbert), Chiron (Ashton Sanders) and ‘Black’ (Trevante Rhodes).

From the opening, camera-twirling scene, Jenkins constructs shots and scenes to place our sense of ease (or lack thereof) directly with the characters. His steadicam twirls when they are restless; the camera tracks head-on when they have purpose. It rests in their faces when the world around suddenly has less import; it gives point-of-view when they are intimidated; it lingers on the aftermath of actions with consequence.

More impressively, there is no grandstanding. […] The performances rely on furtive looks, shifting eyelines and body language.

Broken into three acts, showing different stages of Chiron’s life, the cohesion between the performances of the three actors is remarkable. The manner in which, when revisiting the partner in his first sexual experience as Chiron, ‘Black’ regresses to and evokes the shy behaviour of ‘Little’ suggests a harmony across performances that is to the credit of all. It is something that BOYHOOD didn’t achieve to the same level, even using the same actor across the character’s ages.

Mahershala Ali, although on screen comparatively briefly, portrays Juan fantastically – evincing regret at the direct impact of his drug-peddling actions, coming up short in justifications. The warmth towards young ‘Little’ Chiron, and acceptance of him when heartbreakingly asked “Am I a faggot?”, effectively illustrate why ‘Black’ Chiron seemingly models himself after him.

More impressively, there is no grandstanding on the part of the script or the cast bringing it to life. MOONLIGHT is not a trailer-friendly film in that respect. There is no grand lyrical rejection of the injustices and obstacles encountered, no heavy-handed declarations, nor inspiring monologues. The film says what it wants to with a shift of perspective here, and careful scene blocking there. The performances rely on furtive looks, shifting eyelines and body language.

That each [strand] weaves in with all the others seamlessly shows that the story of MOONLIGHT is told expertly, each lending to and augmenting the other.

The narrative itself is densely packed with different aspects of Chiron’s life: his decaying family situation, the impact of his sexuality on his internal and external mindset, the fate and opportunities afforded to African American communities similar to those portrayed, the drift from childhood relationships and experiences, and the lasting impact they can still have despite that. That each weaves in with all the others seamlessly shows that the story of MOONLIGHT is told expertly, each lending to and augmenting the other. Black’s surrender to the penal system stands on its own as a depressing signifier of modern America, but is all the more keenly felt because of what precipitates it. Chiron’s first experience of his sexuality being accepted is all the more impactful because no male figure has likely done so since Juan did when he was ‘Little’.

MOONLIGHT is not a portrait painted in broad brushstrokes, but a tapestry – any one strand can be admired for its own technique and qualities, but standing back to observe the whole is where the power lies.