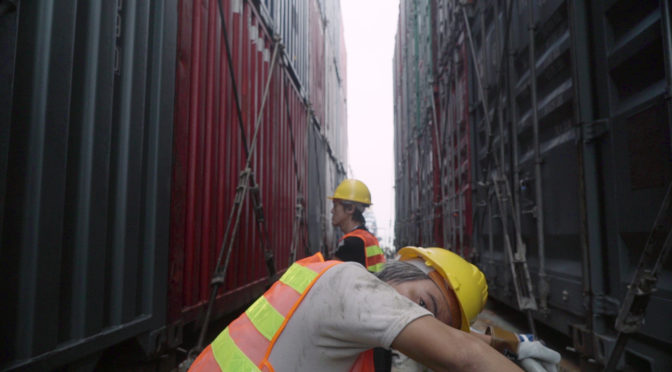 The world’s eyes are fixed on Hong Kong – studying it with a nervous fascination as it stands on the brink of historic political change. For now, it remains unknown whether or not that change will come suddenly and violently, or gradually through peaceful and constructive evolution. Therefore MANY UNDULATING THINGS, screening at the Open City Documentary festival this year, is timely.

MANY UNDULATING THINGS is an expansive and meditative film essay fit to match the sprawling city it studies; tracing Hong Kong’s colonial history and current complexity with a hypnotically measured pace and poetic mastery. The film has a philosophical and even mythic quality which permeates the fantastic breadth and width of the subjects it encapsulates.

Directors Bo Wang and Pan Lu share a background in creating video installations, and it shows in MANY UNDULATING THINGS. It is an atypical documentary which more closely resembles Zhao Liang’s BEHEMOTH than others which characterise the genre. Many shots linger on screen, becoming more absorbing and visceral; unsullied by a barrage of chronologically rigid facts and voiceover as so many documentaries often are. The film glides from subject to subject with ease, unburdened by the documentary conventions of strict and detailed linear timelines. Instead it feels as if the audience were dipping into the thoughts and notebooks of the directors as they mix their personal experiences, profound musings and knowledge of Hong Kong with historical counterpoints which ground the film.

They tell the city’s colonial story using a poetics of space, considering how networks of power and cultural supremacy are made concrete in architecture and city planning. In scrutinising the rampant and gaudy consumerism of Hong Kong, embodied in its sprawling and sterile malls, they present for inspection the current capitalistic and consumerist reality which rests so uneasily with the gross inequality to be found there. The film presents utopian visions dreamed up – or cynically exploited – by colonialists and opportunistic businessmen, mired in the reality of inequality and dystopian fears of being trapped in a soulless perpetual cycle of consumption.

It feels like necessary viewing for anyone curious about this fascinating economic, cultural and architectural anomaly, or the history of western colonialism in Asia.