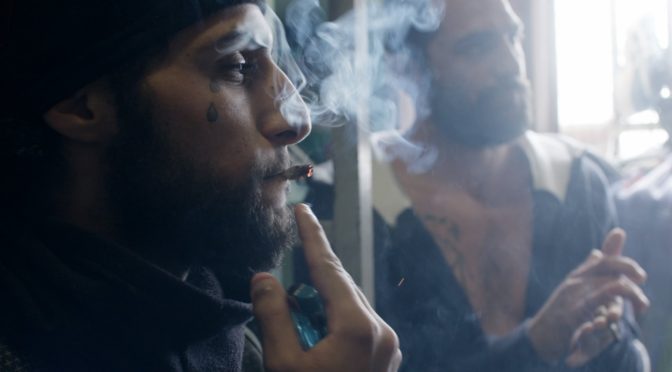 What happens to dreams deferred by imprisonment? Jean-Robert Viallet’s MEN INSIDE ventures inside the walls of Baumettes prison in Marseille, France, giving a rare glimpse into the lives of its 2,000 inmates, many of them under the age of thirty, who live in isolation from the outside world.

The filmmakers were granted a 25-day shoot, and an exploration into what the introductory text calls “inhuman conditions.” The footage chronicles the daily lives of the guards and inmates, watching them go about their routines and listening to their voices echoing down the prison’s bleak corridors. The documentary is filmed in an unintrusive, fly-on-the-wall style, remaining impartial and not attempting to narrativise the prisoners’ experiences. We’re therefore allowed to immerse ourselves in the lives of these men who have been abandoned by society, and rendered invisible via their confinement.

The sound design makes heavy use of silence, emphasising the intense quietness of the prison at certain times, a quietness which can quickly and easily erupt from unspoken frustration into cacophony and chaos. And yet not all can communicate so easily: one confesses that he knows only a little French, while another arrives and tells the guard that he is deaf, and will have to communicate in writing and lip-reading with the officers who do not know sign language.

The filmmakers’ presence remains offscreen, and while this means that the overarching message is not always clear, Viallet and his team seem to underscore the importance of simply listening. The men share their similar back stories and laugh with one another, and the viewer feels almost like an intruder. One recounts the strange period in which he and his father were imprisoned in the same cell, while others chat about getting busted for carjacking and other repeat offenses; a nineteen-year-old is already on his fourth sentence, while another man claims to be on his forty-fourth charge. If they have nothing on the outside, being inside becomes a habit, a drug they just cannot seem to quit, and the documentary only hints at the shortcomings of the legal and economic systems that fail these men and perpetuate such cycles of crime…

The slow pace of the documentary, lacking a clear narrative thread, mimics the slowness of prison life. Even so, in the midst of this bleakness there are some moments of surprising humour, such as when one man makes an impassioned case to a guard that somebody must be using his inmate number to make commissary orders. He never eats pasta – he only buys coffee and cigarettes, so some pasta lover must be scheming to take his money… Another man is interviewed by the warden for having an illegal cellphone, and he tries to come up with a story to explain away how he came to possess this contraband.

The men cling to all opportunities to get outside, to go to work, to have some connection to the world outside their cells, however tenuous. Some of them say that they refuse to dream too much—dreams are for outside, for after their sentences are over—so they focus all their attention on daily tasks to keep them going. Life develops outside while these men are trapped inside. While the documentary MEN INSIDE does not explicitly propose reform or outline how to address prison conditions and the carceral system, at the very least, it demands that we listen to these men and not forget about them and their dreams.