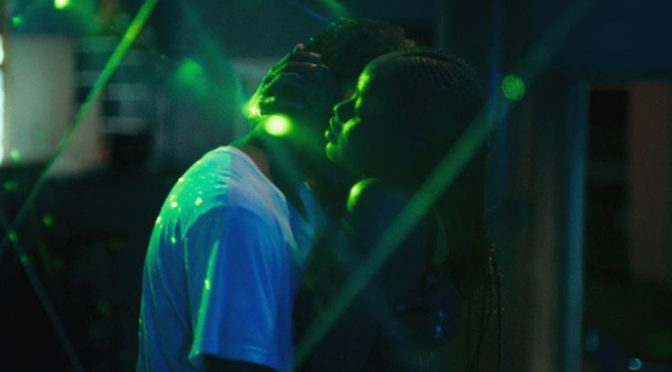 Dakar, on the coast of Senegal: Souleiman loves Ada and Ada loves Souleiman. But there’s a problem — or rather, two. One, Souleiman is wretchedly poor, having just been cheated out of a month of wages by local property tycoon Mr Ndiaye. Two, Ada is days away from marrying the wealthy playboy Omar.

ATLANTICS (ATLANTIQUE), the Grand Prix winner at this year’s Cannes, is the first full-length film from Mati Diop, who is perhaps better known as a performer (especially for Claire Denis’ 35 SHOTS OF RUM) and whose earlier films were short documentaries (she is also, incidentally, the niece of Djibril Diop Mambéty, director of the classic Senegalese film TOUKI BOUKI.)

Diop’s very first film, ten years ago, had a very similar title to this film — ATLANTIQUES — and approached the story of economic migrants risking their lives on the ocean in a much more direct way. Here, the film begins with the young men who will make the dangerous ocean journey to Spain trying and failing to get the back pay they are owed for building work in the city’s centre, then travelling out to their homes near the coast. Although one of them, Souleiman (Traore), looks as if he will be the protagonist of the rest of the film, it is not long before he and his comrades simply disappear from the story — in person, at any rate. In Souleiman’s case he vanishes without saying goodbye to the young woman he loves, Ada (Mama Sane). What once seemed a predominantly social drama is now part-romance.

Despite her reciprocal feelings towards Souleiman, Ada has been persuaded to marry a much more eligible suitor, Omar (Babacar Sylla), whose parents are immensely wealthy and whose fantastically furnished bedroom, which he will soon be sharing with Ada, is viewed enviously by the more acquisitive of her friends. Then, during the wedding ceremony, the bedroom is set on fire, and the police are called. An element of mystery is thus added to the film’s social-romantic mix.

The detective called in to investigate this crime, Issa, is sympathetically played (by Amadou Mbow) but unsympathetically characterised, convincing himself that Souleiman was responsible for the arson and that Ada was a willing accomplice. When first introduced, he is suffering from an unknown illness — a fate which also overtakes many of Ada’s friends. For these young women, the sickness becomes associated with spiritual possession: now a supernatural element joins, and begins to dominate, the film’s existing mixture of genres.

Given this relaxed attitude to genre, it comes as no surprise that ATLANTICS favours atmosphere over plot. Diop is, after all, telling a sort of ghost story. She shows an unerring gift for capturing mood, whether depicting Dakar’s clash of old and new cultures, the fun-loving patrons of the bar run by Ada’s friend Dior (Nicole Sougou), or a home invasion by a group of implacable, white-eyed girls. On many occasions, the camera simply looks out of the vast ocean, while Fatima Al Qadiri’s striking score plays in the background. As if in direct contrast to this ancient, primal image, many shots of the city show a giant modernist tower in the background, filmed as if it is somehow translucent, or perhaps a mirage.

ATLANTICS gives us a final genre to consider because this is also a coming of age story for Ada. In the beginning, her sullen resistance to the pressure from parents and peers alike only serves to reveal her passivity. However, as she suffers a series of indignities she begins to know who she is and will become, and it is only fitting that she gets to have the final word.