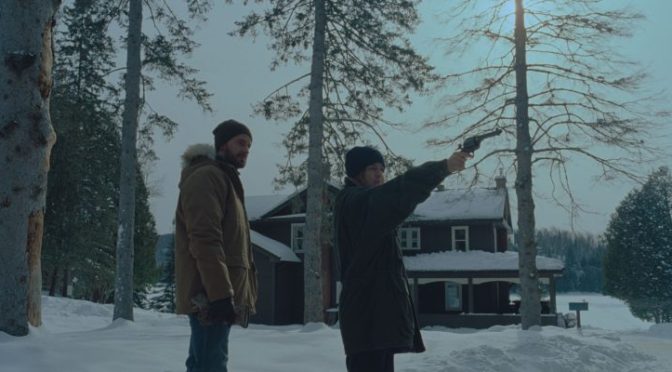 From the creators of the Austrian horror GOODNIGHT MOMMY, Veronika Franz and Severin Fiala, THE LODGE is a horror so disconcerting that it will begin to make you question your own sane judgement. THE LODGE possesses a straining inner tension that plunges into a psychotic nightmare executed in a tentatively suffocating manner.

As winter commences for another year, siblings Mia (Lia McHugh) and Aiden (Jaeden Martell) find their lives in tatters after the death of their mother. In an attempt to bring harmony to his dysfunctional, grieving family, Richard (Richard Armitage) suggests that he, the kids and his new girlfriend Grace (Riley Keough) take a break to the homestead over five hours away to spend Christmas in the forest. There is reluctant agreement amongst the party, as the brewing animosity between the kids and their stepmother begins to fester. Things take a turn for the worse as a blizzard hits after Richard returns to the city and the rest of the family are isolated in the cabin.

A film that tiptoes on an icy rope between the supernatural and the psychotic, the script teases us along as both the intensity and the instability of the situation rise; food begins disappearing, the power cuts out, and Grace can’t find her medication. This tension brings in an abstract variety of complex possibilities: is the children’s mother enacting her vengeance upon the family for being a part of her demise, or are the demon’s from Grace’s past emerging to haunt her? Before they left, Aiden delved into Grace’s history online, unearthing her religious cult past and participation in a mass repentance suicide. One would think this would be enough to send the kids into a panic, but there is something menacingly calm in their mannerisms when trapped with her during the blizzard, making the atmosphere even more unsteady. What makes it such a captivating one to watch is the way it makes you shift uncomfortably; furiously searching your mind for the secrets before being dragged back to reality at a classic jump scare.

“Grace’s agony throughout is vaguely hypnotic and uncomfortably tactile, with some moments so intensely and visually painful one actually recoils in horror at the prospect.”

For a split second you become lost in the madness; momentarily torn between contemplating if THE LODGE is spinning a tale of the supernatural, or if the inner hysteria of Grace has clutched your thoughts too. The use of silence within the score is deafeningly powerful; tense moments of it envelop you and without warning a gunshot will shoot you back into the room. The film almost becomes heady in its psychotic atmosphere. Each frame feels calculated to pull you into unsuspecting moments, letting the viewer play a game of denotation and symbolisation. Grace’s agony throughout is vaguely hypnotic and uncomfortably tactile, with some moments so intensely and visually painful one actually recoils in horror at the prospect. Arguably, the only hook to the film’s humanistic reality is that of Richard. Even then, one may infer he is the catalyst to their psychosis: the mere fact that his girlfriend is from a cult he researched for his work, bringing this experiment into his life.

The film relies heavily on its comparative imagery; initially, it seems absurd before you realise the cruel undertones of it, as they all collectively descend into madness. Having found success through working with Yorgos Lanthimos on KILLING OF A SACRED DEER and THE LOBSTER, acclaimed cinematographer Thimios Bakatakis delves through the bleak landscape to sculpt out the chilliest exteriors of the cabin against the ominous icy backdrop of the forest. Shooting horrors is a complex art to master and capturing a drawn-out landscape requires tentative preparation.

“It’s by no means a heart-stopping thriller, but it’s subtle, susurrus nature is sure to snare its icy grip on the audience.”

While being quite a palpable storyline, it does become dry at times as the pacing dwindles and the momentum slows. When trying to manage the mystery you become swept up in the obscurity. The film can skip from long panning shots of the wilderness, but then you’re suddenly caught in a whirlwind flashback of organ chords and sect chanting. A few seconds of each shot could be shaved just to keep it moving a bit more. However, the tension and the enigma is ever-present and, initially, you expect more of a visceral reaction from the children; until you start to question what their intentions are.

THE LODGE executes a gripping horror, and whilst it is by no means a heart-stopping thriller, its subtle, susurrus nature is sure to snare the audience in its icy grip.