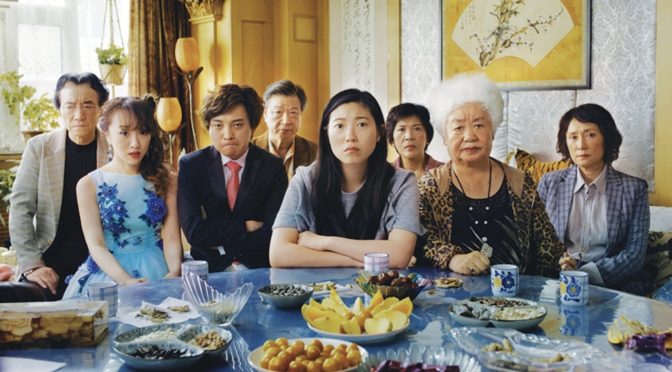 Lulu Wang’s second feature film, THE FAREWELL (別告訴她), is an exquisitely constructed film that tells a beautiful story about the lies, big and small, that stitch together our relationships. Anna Franquesa Solano’s gorgeous cinematography, Alex Weston’s melancholy soundtrack, and the cast’s incredible performances all work together to speak profoundly about how we express love, how we express truth, and how those often aren’t the same thing.

When Billi (Awkwafina) learns that her Chinese grandmother, Nai Nai (Zhao Shuzhen), has advanced lung cancer and that their family has chosen not to tell Nai Nai, Billi travels from New York to Changchun in China to attend the hastily-arranged wedding of her cousin — an excuse for everyone to say goodbye to Nai Nai.

THE FAREWELL tells us in a title card that it is “Based on an actual lie” but quite apart from the lie at its centre, the film is peppered with untruths. From Billi and Nai Nai’s first interaction in the film when Billi tells her grandmother on the phone that she is wearing a hat on a cold day in New York to Billi casually batting away her father (Tzi Ma) by telling him that she hasn’t heard back about her fellowship application yet, the film contains dozens of small lies within the family. These are everyday lies, recognisable lies, the kind of lies that we need on those rare occasions when family comes together from different places, from different generations, and with different cultural attitudes. The contrast between these everyday lies and the central lie about Nai Nai’s cancer invites us to ask: what is the difference? Is lying to Nai Nai about her condition not, as a doctor (Liu Zhuying) refers to it, a “good lie”?

Various cultural ‘lies’ also recur throughout the film. During the wedding, occasional shots of off-duty service workers — hotel staff and a dragon performer — sitting down, smoking, and shedding their veneer of service prompts us to consider their emotional labour as yet another ‘good lie’ built into social relations. Billi’s hotel is a good lie writ large: her uncle, Haibin (Jiang Yongbo), says it’s brand new and yet, over the course of her stay, Billi sees behind the reputable façade to the truth of gambling and sex work that goes on in the hotel.

Alex Weston’s soundtrack (including a beautiful Elayna Boynton cover of a track by the late Leonard Cohen) works wonderfully to fill the film with the melancholy that the family are not able to express. The solemnity of the soundtrack feels as if it’s constantly threatening to break through into the diegesis and succeeds in one powerful scene where, as the family cheerfully clears up after dinner, Billi sits down at a piano and plays a hauntingly sad melody that expresses everything she’s unable to say to her Nai Nai. Though she has to lie, music tells the truth.

Nai Nai is the emotional heart of the film and Zhao Shuzhen embodies a universality of ‘grandma-ness’ in her outstanding central performance. Like Billi, we don’t want to lose her. As the film progresses to a third act with no surprise revelations and no shocking confrontation, the denouement is not the reveal of the truth to Nai Nai but Billi accepting her complicity in the family’s lie. Like Billi, we too come to feel that maybe it’s OK to tell these kinds of lies as a way of expressing our love. We tell our relatives that we’re fine because it’s easier than telling the truth; we tell our grandma that we’re wearing a hat because we don’t want her to worry about us; we say farewell to people that we love by telling them that we’ll see them again soon even if we know we won’t.