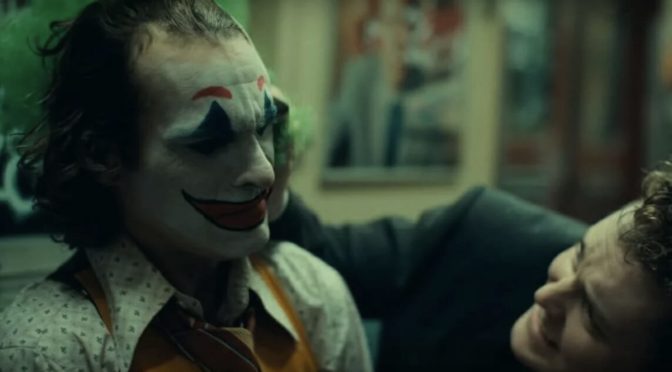 There is an irony at the heart of JOKER: one of the most original-feeling comic book movies in years achieves its supposed sophistication by plagiarising the cinema of Martin Scorsese and Sidney Lumet. JOKER wears its influences on its bloodied sleeve, but the lack of nuance and a determination to be iconically shocking mean it squanders much of this potential. JOKER is a beautiful but simplistically shallow tale of one man’s downward spiral, tacked on to a recognisable cinematic icon. Todd Phillips’s film is a Batmobile with the engine of a clown car.

The story opens in 1981 on Arthur Fleck (Joaquin Phoenix), a clown-for-hire, being beaten up after his prop sign is stolen. As he lies bruised on the ground, in garbage-ridden and rat-infested Gotham City, it is clear this man is down on his luck and the understanding of others. Suffering from several mental ailments, he lives with his mother and dreams of taking his standup comedy routine to a popular late-night show hosted by Murray Franklin (Robert De Niro). After Fleck is fired from the clown gig, the film charts his path through despair, violent reclamation of control and delicate grip on reality. It then accelerates into personal and societal anarchy as he careens towards an unexpected appearance on Franklin’s show.

Reverence for THE KING OF COMEDY is hammered home by casting De Niro as a talk show host, with whom Fleck is obsessed (albeit with De Niro slotting into a role more akin to Jerry Lewis’s). Fleck’s nature more gently evokes TAXI DRIVER when placed in the DC universe’s equivalent of New York City. There is also window dressing of DC Comics lore with the presence of Brett Cullen as Thomas Wayne; Gotham mayoral candidate and father of the future Batman.

“…JOKER channels New York noir of the 1970s and 1980s, with the sharp edge of the material showing the film wishes to be a more challenging and uncomfortable film than nearly all comic adaptations to date.”

On the narrative and visual front, JOKER channels New York noir of the 1970s and 1980s, with the sharp edge of the material showing the film wishes to be a more challenging and uncomfortable film than nearly all comic adaptations to date. To heighten the impact of the story, it also seeks to attach it to a character with existing cinematic baggage. JOKER is an ambitious film, but there is an arrogance in the manner it blends this melange of objectives and influences.

The films JOKER looks to – TAXI DRIVER, THE KING OF COMEDY, PRINCE OF THE CITY amongst others – dealt with corruption, societal issues, or the dangers of neglect in ways that are terrifying because of their lack of sensationalism. Lumet’s urban settings had a banality to go with the malignancy. Scorsese’s THE KING OF COMEDY is a disorientating and disturbing watch, in part because of the mundane outward expression of Rupert Pupkin’s narcissistic desire to be heard and seen. At every turn, JOKER looks to be a heightened version of this latter picture, right down to Fleck’s relationship with neighbour Sophie (Zazie Beetz). However, in pursuing a hyper-stylised descent for Arthur Fleck, Phillips robs the film of the same grimy reality it so clearly seeks. As a result, the references are superficial and superfluous to the material at hand.

“The films JOKER looks to […] are terrifying because of their lack of sensationalism. [By] pursuing a hyper-stylised descent for Arthur Fleck, Phillips robs the film of the same grimy reality it so clearly seeks.”

The desire to be challenging with an iconic character also strips the film of the meaning it seeks. The elements harking back to that assemblage of challenging, morally grey cinema imply a desire for intertextuality but deliver little more than empty homage. Further, the mixed success of the execution makes the film itself pretty unstable. There is cacophonous indecision between Hildur Guðnadóttir’s wonderfully painful original score and continuous needle-drops of rock and jazz-influenced anthems. In jumping back and forth as Fleck’s mind flays, it is unclear whether the film wants to settle on a lyrical, explicitly petrifying descent or the more banal phantasmagoria that can be found in THE KING OF COMEDY. JOKER includes a rug-pull moment delivered as a big ‘Aha!’ reveal, whereas in Scorsese’s 1983 picture it was done matter-of-factly in the opening scenes. This reveal is even more jarring when the plot mechanics of the script rely on some logical absurdities elsewhere, which would only have made sense in a delusional context.

JOKER posits the idea that the neglect and lack of magnanimity displayed by SocietyTM create that society’s supervillains; that we don’t need agents of chaos when we trample upon and mock people to the extent that they lash out in return. It’s a potent idea – particularly to attach to such an iconic character in 2019 – but the execution and script lack the subtlety to pull this trick off (just as the Occupy Gotham subtext to THE DARK KNIGHT RISES felt tacked on in 2012). Part of the fascination of ‘descent into madness’ stories is the fear generated at the suggestion of the susceptibility of otherwise stable people or by questioning the role of the spectator. This morbid fascination is what drives some of the best examples like BENNY’S VIDEO, NETWORK, or – one film that feels very much in mind when watching JOKER – FALLING DOWN. However, we know from the title (and not living under a rock) Fleck – from an already deeply troubled starting point – is destined to become an iconic supervillain. Therefore, any commentary on what drives that and the responsibility, if any, society has is dulled. Merely displaying banners advertising a repertory showing of MODERN TIMES in Gotham does not count as commentary; nor does an on-the-nose tirade delivered to De Niro’s unempathetic TV host.

“[JOKER] is all too willing to sit smugly in the comic book furniture, contrary to what its supposed high-mindedness would imply.”

Relying on familiar iconography to deliver a new story would be forgivable but JOKER goes further: it is all too willing to sit smugly in the comic book furniture, contrary to what its supposed high-mindedness would imply. Thomas Wayne forms part of a half-baked subplot involving the former employment of Fleck’s mother by the Waynes’ company. Although the senior Wayne serves a narrative purpose, the surname ‘Wayne’ itself does not, merely being present to generate empty drama; perhaps to hook folk bored by the lack of Batman (a further scene in the film’s closing segment is glaringly tacked on to link to the wider story possibilities).

The ambition of JOKER is commendable, but the film is merely standing on the shoulders of giants. The problem with the film is not a disturbing story or morally murky characters, but the empty homage used as a vehicle for them. Beautiful cinematography and physically transformative performances here are merely clown’s makeup; a conjuring trick that distracts from a simplistic script and a shallow rendering of complex themes.

5 thoughts on “Joker: a Batmobile with the engine of a clown car”