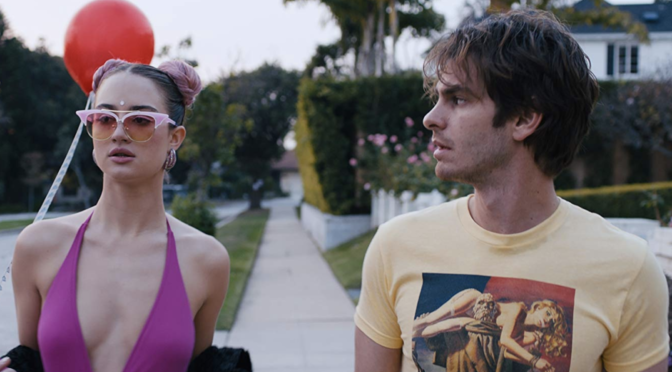 A bewildering array of influences and approaches can be found in UNDER THE SILVER LAKE. There is plenty to admire in the execution and scope of David Robert Mitchell’s third feature, but it becomes clear a little too much latitude has been given to him after the breakout success of IT FOLLOWS. A film that wants to satirise the very same things it indulges in, the melange of influences and strands means UNDER THE SILVER LAKE is a jack of all trades and master of none.

Andrew Garfield leads as Sam, a young slacker in Los Angeles. By day he can be found ogling nude female neighbours with binoculars (in an overt REAR WINDOW reference), dispassionately shagging a friend-with-benefits, or adorning his residence with pop-culture artefacts like Kurt Cobain posters. One evening, however, he notices and eventually connects with Sarah (Riley Keough), spending an evening with her. She then mysteriously disappears and Sam turns investigator, spiralling deeper into a web of conspiracies hiding in plain sight to track her down, including bizarre theories spouted in local zine Under The Silver Lake.

“…at one point characters are seen to be leaning on a grave marked ‘Hitchcock’ in almost parodically large lettering (with the man himself perhaps revolving at high speed six feet below).”

It is made very clear before the main plot thread is fully sewn that the tone and influence of Hollywood’s classic noirs will be keenly felt. The score has a clear Bernard Herrmann feel, and the nods to the likes of Lynch, Hitchcock, and both classic and neo-noirs are woven throughout. Indeed, at one point characters are seen to be leaning on a grave marked ‘Hitchcock’ in almost parodically large lettering (with the man himself perhaps revolving at high speed six feet below).

The film’s opinion of its lead character is unambiguously low, he’s sprayed by a skunk early and the stench follows him throughout. He casually ogles every woman he comes across as an object, and at one stage has some rather hateful dialogue about the homeless. It is, therefore, unfortunate that, after adding fuel to his delusions, Sam’s gas is never really put at a peep and the film instead indulges him.

The film makes oblique allusions to how women are consumed by Hollywood, yet consciously portrays all within the film as conspiratorial, or needing Sam to enlighten them. Patrick Fischler is shot with lenses that visually accentuate the crazy-sounding nature of his bizarre ramblings, yet the film wants to indulge in Lynchian plot points and visuals that back him up. Sam’s odyssey is positioned as both idiotic and Homeric. UNDER THE SILVER LAKE wants to have its cake and then claim there is a massive high-society plot to not let anyone eat it.

“UNDER THE SILVER LAKE wants to have its cake and then claim there is a massive high-society plot to not let anyone eat it.”

There is plenty to like about UNDER THE SILVER LAKE, including Mike Gioulakis’ cinematography that elevated IT FOLLOWS and Shyamalan’s recent upturns SPLIT and GLASS, and Garfield does admirable work as Sam. Films with delusions of grandeur frequently pop up, with twist plots that seem extremely self-satisfied. UNDER THE SILVER LAKE doesn’t fit neatly into this category, feeling more like a collection of good and bad ideas that were never separated from one another. However, a sprawling script and the undermining of its own themes mean the good parts can only be found floating face down in said lake.