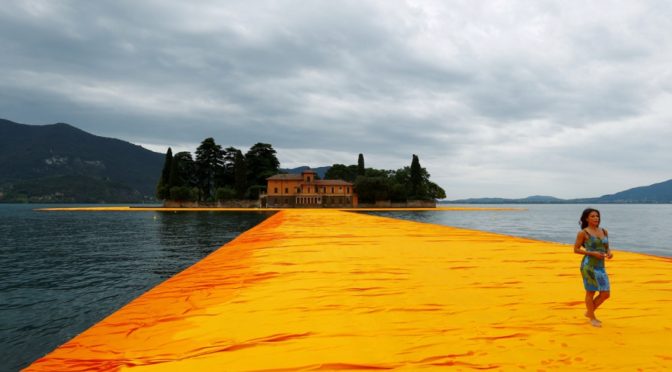 Being an artist is not a profession — it is a state of being. Christo, the Bulgarian artist famous for his arresting large-scale installation pieces, firmly believes that an artist is never not an artist. WALKING ON WATER, directed by Andrey Paounov, chronicles the construction and execution of Christo’s 2016 temporary art installation The Floating Piers, a three-kilometer floating walkway constructed on Lake Iseo in northern Italy. But fitting with Christo’s proclamation, the documentary is not just an account of the creation of one work, but a glimpse into the creative madness of living a life that is entirely devoted to art.

As the documentary counts down the days until the installation’s opening, Christo’s team works frantically to bring his vision of floating piers to life, battling the elements and unpredictable winds and rains as they assemble a floating dock of polyethylene cubes swathed in golden fabric. The intent is for visitors to perform a sort of miracle as they walk on water; when Christo explains his concept, he appears overcome by a pure sense of wonder at the idea of thousands of people making their way across the lake’s surface on golden piers.

Christo’s work has always been risky and boundary-pushing—he and his wife and collaborator Jeanne-Claude (who passed away in 2009) have dreamt up many more projects than they have been granted permission to execute. Despite setbacks, a revolutionary spirit permeates their works that occupy and transform public spaces. Christo had been formulating the piers project with multiple potential locations in mind since 1970, with the idea constantly falling through until it finally came to fruition in Italy. In the opening scene, Christo silently works on creating drawing after drawing of the pier project, conveying this fantastical image that has been in his mind for decades. He wears a gas mask as he spray paints a canvas: a common precaution against fumes but also an undeniably dramatic image, suggesting the danger associated with his work, the inherent risk involved in making art.

Paounov’s team observes Christo’s process from a remove, not asking questions or conducting direct interviews with the artist or his team. Thus there is only limited insight given into the inspiration for the project or its thematic resonances to Christo. In addition, while the excruciating installation process is shown in detail, there is little discussion of the design process or engineering feats required to construct the piers. This is somewhat unsatisfying, but perhaps is meant to make us feel frustrated. Instead of granting us access to the artist’s interior world, Paounov shows us his public face and the performances he must give in meetings or in front of audiences. Christo argues with officials and addresses crowds of adoring fans, and there is a constant presence of phone cameras desperate to catch snapshots.

There is always someone recording Christo, capturing him or his floating piers on their smartphone. Christo himself, though, is firmly anti-technology, often yelling in exasperation at computers or smart devices. He puts an emphasis on the visceral sensations associated with being present at the site of his installation — Christo declares his love for “real things,” and The Floating Piers force you to walk and feel the real air, the real water, the real world that stands in opposition to the virtual. The documentary thus takes on something of an impossible task, trying to capture via technology what is essentially something that must be experienced in person, preserving an ephemeral project that is inextricably tied to its environment and to a particular place and time. WALKING ON WATER gives behind-the-scene access to the installation, but Christo would probably be the first to say that there is no substitute for the real thing.

Instead of Christo’s personal life, what occupies much of the focus is the absurd bureaucracy he confronts in trying to mount his work and control the crowds, dealing with incompetent staff and pushy art buyers, poor communication and evaded blame. Christo and his assistants grow increasingly belligerent as they wrangle materials in battles against the elements and argue with local authorities about crowd control measures. It can be frustrating to watch these arguments repeat themselves, but it is our awareness of these frustrations that makes the unveiling of the floating piers and the “miracle” of walking on water all the more miraculous. On the last day of the installation, Christo surveys his work from a helicopter, and he looks down with an expression of awe at this vista that will soon vanish. WALKING ON WATER acts as a testament to the artwork, marking the miracle, where the impossible could be achieved and the otherworldly forms from Christo’s imagination could be made real, if only temporarily.