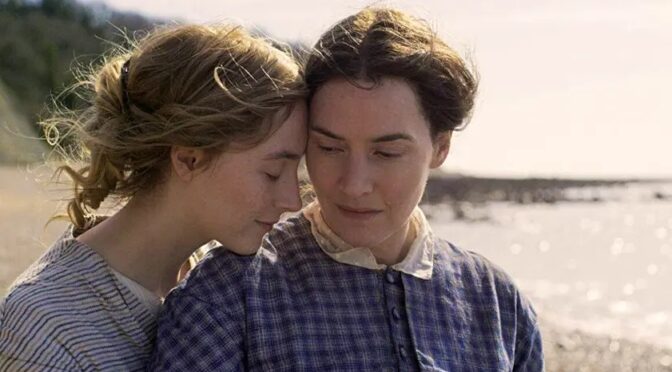 As another entry into a series of recent lesbian period dramas, Francis Lee’s AMMONITE always ran the risk of feeling too familiar. At first glance, the film does appear to resemble a number of its predecessors – most notably, PORTRAIT OF A LADY ON FIRE – with its moody atmosphere and picturesque scenery. Thematically, however, ‘Ammonite’ very much departs from these films. Despite the concentration on identity through sexuality, it is the film’s analysis of class dynamics which is the most thought-provoking element of an otherwise stale romance.

In 1840s Dorset, renowned palaeontologist Mary Anning (Kate Winslet) lives a quiet life with her elderly mother. She spends her mornings scouring the beach for new fossils, immersed in her trade. Unlike the London-based men who dominate her field, Mary will not stray from her small hometown. She refutes the attempts others make to get to know her and, as a result, spends the vast majority of her time alone. Due to her reluctance to explore the more fashionable side of palaeontology, the Annings’ only source of income is through their small, modest shop, where Mary sells fossils. Her days of fame are behind her; though her past discoveries were revered, Mary no longer dominates a discipline so tied to the bright lights of the city.

“This hostility evaporates […] and it is here that AMMONITE’s grasp on its central relationship first begins to collapse.”

Despite this, Mary is still a source of inspiration for wannabe palaeontologists, as she begrudgingly discovers when rich city kid Roderick Murchison begs her to teach him some of her skills. With his sullen wife, Charlotte (Saoirse Ronan), in tow, Roderick refuses to back down until Mary caves in to his demands. When Roderick offers to pay Mary to provide company to Charlotte whilst he is away with work, the women become entangled in a romance neither of them expected.

Mary and Charlotte are characterised immediately by their class difference; Mary straddles the poverty line, whilst Charlotte lives a life of luxury. From small living quarters to the scarcity of food, Mary’s life is shaped by her lack of money and status. She is tough and jaded as a result and, initially, Charlotte’s inability to take care of herself irritates Mary to no end. In complete contrast, Charlotte is frail and needy. She is dependent on others for everything, but rarely returns any of the kindness she receives. This hostility evaporates, however, once Mary is forced to care for a feverish Charlotte, and it is here that AMMONITE’s grasp on its central relationship first begins to collapse.

Opposites may well attract, but Lee does not do enough to demonstrate how and why the pair drift from dislike to love; this change between dynamics is too rapid and feels confusing as a result. To add insult to injury, Kate Winslet and Saoirse Ronan struggle to maintain any kind of chemistry, with Ronan, in particular, putting in a surprisingly poor performance. As Lee relies on atmosphere rather than dialogue to craft their affection, the film is unable to effectively portray the nuances of their relationship – with little dialogue and no visual evidence of their attraction, Mary and Charlotte’s supposed love falls completely flat.

“Whilst [the romance] fails to produce much of worth, Lee’s commentary on class and the rural/city divide is admirable.”

Whilst this part of the film fails to produce much of worth, Lee’s commentary on class and the rural/city divide is admirable. In one particular scene, Charlotte demonstrates how she views her new lover as a belonging, simultaneously disrespecting Mary’s independence and love for her home. Charlotte’s assumption that Mary must desire wealth epitomises the ignorance of the upper classes towards the pride of the working classes. Whilst poverty is obviously a struggle for Mary, she finds the idea of sacrificing her identity abhorrent; her home and her job are all that she has ever had.

The focal points of Mary and Charlotte’s relationship are – time and time again – imbued with the effects of their class. Their meeting is due to a financial exchange which Mary is forced to accept out of desperation for money. The growth of their love takes place as Mary is nursing Charlotte back to health; an imbalance of power which sets Mary up as Charlotte’s subordinate. Later in the film, after a brief separation, the reunion of the couple is instigated entirely at Charlotte’s whim; she calls Mary to her, much like an owner calls a dog. Ironically, the official description of AMMONITE’s plot states that their relationship is “a passionate and all-consuming love affair that will defy all social bounds” – on the contrary, the majority of the film points to a dynamic that cannot defy the class difference that characterises it.

“The focal points of Mary and Charlotte’s relationship are – time and time again – imbued with the effects of their class.”

It is a shame, then, that Lee’s focus on socio-economic themes is diminished by his concentration on the romantic element of Mary and Charlotte’s relationship. In a puzzling narrative decision late in the film, Lee even contradicts the class divide he had so carefully set up, for the sake of a happier ending. In this inconsistent characterisation and the film’s lack of romantic chemistry, even the glimmers of legitimate social commentary cannot stop AMMONITE from succumbing to blandness and adding very little to an already overcrowded genre.