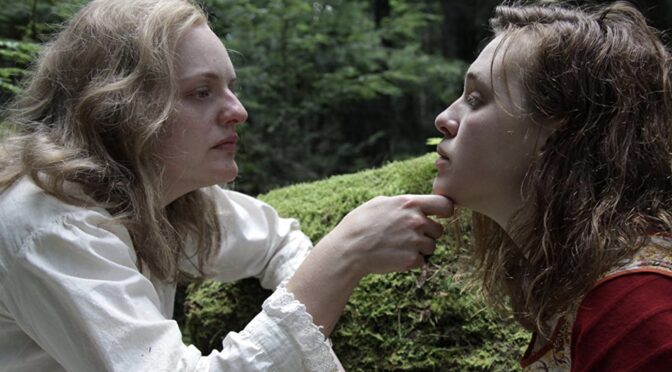 Shirley Jackson’s fiction permits us to try a taste of madness. Her stories, published from the late 40s until her death in 1965, are fixated on the Gothic and the macabre. Her writing is frequently concerned with not only what is taboo or strange, but also the prying eyes of curious bystanders who can never fully deny their morbid interest in the unexplainable, twisted, or paranormal. And when they do lean in, they find themselves intoxicated by the madness of her fiction.

Common decency says you shouldn’t ever publicly discuss things like human sacrifice, an oncoming apocalypse, or familicide, but Jackson admits her readers into that forbidden world. Once they draw back from the confines of her fiction, they find themselves exhilarated with the intensity of their experience, and start to see their reality in a slightly altered way. In the opening moments of Josephine Decker’s SHIRLEY, a young woman Rose (Odessa Young) explains the ghastly ending of ‘The Lottery’ to her new husband Fred (Logan Lerman). “That’s creepy,” he says, disinterested. “It’s terrific,” she replies, before starting to feel him up in the middle of their train carriage.

“Jackson’s writing strikes a challenging tone to new readers. The strangeness, the wit, and the horror of her work can be transfixing but also confronting.”

Jackson’s writing strikes a challenging tone to new readers. The strangeness, the wit, and the horror of her work can be transfixing but also confronting. Her books are daring you to read further and find pleasure in the chaotic way her stories unravel, often within the confines of a bleak, possibly haunted house. But upon looking into her personal life, her writing takes on a more melancholy feel. Jackson struggled with addiction, her life was plagued by battles with failing physical and mental health, and her relationship with her literary critic husband Stanley Hyman was troubled. It’s impossible to see her stories of lonely, outcast characters who submit to terrible unseen forces without thinking about what Jackson herself was trying to say with her writing about the horror of existence.

But SHIRLEY is not an adaptation of Jackson’s writing. It instead adapts the novel of the same name by Susan Scarf Merrell, where the fictional couple of Rose and Fred are taken in by Shirley (Elisabeth Moss) and Stanley (Michael Stuhlbarg) while she is writing what is alluded to be her 1951 sophomore novel Hangsaman. SHIRLEY is less of a biopic and more of a nightmare, electing not to tell the story of the eponymous writer’s life, but instead injects her books’ themes of mental disintegration and abuse into a complex relationship drama filled with insanity and manipulation. It is a constantly fracturing narrative where the four central characters are always at odds with one another, messing with psyches and laughing behind backs. It is not a realistic depiction of her life, but a fever dream of toxicity and a resounding celebration of Jackson’s writing.

Moss and Stuhlbarg hand in astounding performances as Shirley and Stanley. Their relationship is dysfunctional to the extreme, and their interactions are loaded with controlling and bitterness. Stanley is a philandering literature professor with a sickly, flirtatious charm, while Shirley is a bed-bound alcoholic with a wicked and cruel sense of humour, lashing out at anyone who disturbs her hazy, depressive peace. Behind closed doors, we see the extent of Stanley’s manipulations, undermining his wife so she always remains firmly in his grasp. “You’re just not up to it,” he tells her when she broaches the idea of writing another novel. In a twisted way, Stanley thinks that by repeatedly putting his wife down, he can take the credit for motivating her to make good work.

“…Decker has crafted a film delighted in how it makes its characters and audience uncomfortable. Scenes will dramatically lurch into the unsettling…”

Together with Sturla Brandth Grøvlen’s shaky, claustrophobic camera-work and writer Sarah Gubbins’ acid-tongued screenplay, Decker has crafted a film delighted in how it makes its characters and audience uncomfortable. Scenes will dramatically lurch into the unsettling, such as when Shirley tells Rose the mushroom in her hand is lethal before she swallows it whole. The gulf of panic and confusion is held open for a moment too long before Shirley starts cackling at her own joke – the mushroom was harmless. The film laughs at how it makes the viewer, even for a moment, scared and vulnerable.

It is unclear where SHIRLEY sits in the biopic genre. The film can be seen as slander on who Jackson really was, or as an off-kilter spin on the conventional biopic. However, treating SHIRLEY as a biopic at all feels rather disingenuous, because the film so clearly does not consider itself one. Decker’s film is about the dangers of projecting your own narratives onto real people; a self-conscious confusion of fiction with reality. She sees Jackson’s voice crying out through her fiction, and sets out to investigate the source of this pain not through a cinematic replication of Jackon’s life, but through the dynamics of a work of dramatic fiction. Like Jackson’s work, SHIRLEY is melodramatic, unhinged, cruel to its characters and unconvinced that life can be fulfilling. It can be uncomfortable at times, but SHIRLEY is committed to turning the same lens that Jackson turns on people onto the writer herself.

But by adopting the conventions of fiction, you inevitably include a few cliches. At points Rose and Shirley’s friendship ventures into the territory of queer-baiting. The trope of 50s wife fighting against suffocating patriarchal values by experimenting with homosexuality is, at this point, overdone. While many critics have done excellent queer readings into Jackson’s stories, there’s still something that feels cheap about implying that Shirley’s madness is due to repressed homosexuality rather than how her abuse, addictions, and mental illness make her look at the world in an unhealthy way. It’s an interesting route to take in a film about the tortuous struggles of realising your own identity, but it’s the most underdeveloped one in the story.

“That said, while SHIRLEY is not the most truthful or respectful of dramas about a real person, it is one of the most compelling in recent memory.”

That said, while SHIRLEY is not the most truthful or respectful of dramas about a real person, it is one of the most compelling in recent memory. In Shirley, brought so vibrantly to life by Moss, we see a self-destructive, tormented genius role usually reserved for men. The joy Shirley gets from plunging people into the unsettling derives from the fact that experiencing madness is also to experience freedom. We are relieved of the values and expectations of our restrictive society, free from the demands of a modern world. A touch of madness once in a while is not necessarily a bad thing, but dipping into it too much erodes our grip on reality. Because while there is freedom in madness, there’s stability in normality, and the relentless pull between these two polar opposites can tear us apart.

Strange and scary fiction affects the way we look at the world. They can give us a clarity to which we’ve previously been unaccustomed. SHIRLEY is a film about how the asphyxiation of a ‘normal’ life can leave us craving the depraved, cavernous depths of the human imagination. We just need to be careful it doesn’t consume us.

SHIRLEY was also covered in the May edition of our partner Cinetopia’s monthly radio show. Listen to the review below: