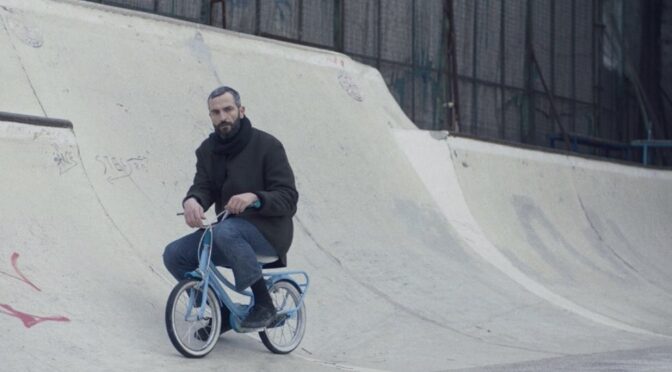 Christos Nikou’s APPLES takes a setting adrift from the contemporary world to reflect on modern identity and memory. Driven by a gentle Aris Servetalis performance of deep pathos, the end effect is a touching and tragically amusing portrait of a person clinging to a semblance of self.

The film opens in Athens, with many people seemingly overcome by sudden and unexplained amnesia. Far from being a disaster-story, however, this particular pandemic – although what exactly is happening is never made clear – has become as close to mundane as possible. Citizens know to phone an ambulance for those afflicted, and doctors have a program for building a new identity for the sick. Aris finds himself a part of this after apparently forgetting his life, found alone on a bus without identification.

The medical professionals tasked with reforming an identity for him direct him and his fellow patients to undertake specific tasks (attend a costume party, drive a car, go to a strip club, meet someone) and take a photo to capture it. What follows is a series of comically absurd situations documented with a set of Polaroid photos. Nevertheless, there is a sad blankness to the sterile, flat stream of images – evidence of mere existence rather than experience or personality.

Nikou’s film quickly starts to take shape as a strange retro reframing of the performative aspects of the modern social experience. Proof of activity substitutes genuine human connection and feeling, providing dispassionate photographic evidence rather than a lasting memory. Further, the instructions – delivered by cassette tape, part of the retro aesthetic abstracting these themes away from anything directly of this century – are frequently comically callous and off-hand. The instruction to “just use [someone] and take a photo” punctures a burgeoning connection between characters in an agonisingly sad moment.

The clinical way in which doctors direct Aris to undertake these tasks reflects the vacuous and emptily hedonistic lives valued by popular culture, not for their spiritual and social value but their showiness and positing of spiritual tranquility that is merely a mirage.

In divorcing these from any modern touchstone – smartphones, laptops, internet – APPLES smartly suggests the absurdity of these trends and their purpose. The sad emptiness pierces through if you take away the modernity. It feels apt that the one trait Aris seems to retain – a craving for apples – gives the film its title and his only real source of genuine sustenance, in any form. Christou’s settings – interior and exterior – are sparse and lacking warmth, absent of the touches of the personalities of the people inhabiting them. There are hints of memory in some of Aris’s actions beyond his apple consumption, and the film invites thoughts about what memories we treasure and how we do so.

Nikou’s association with DOGTOOTH and Yorgos Lanthimos (as an assistant director) will bring inevitable comparisons, but APPLES stand as a worthwhile and intriguing statement independent of its absurdist peers.