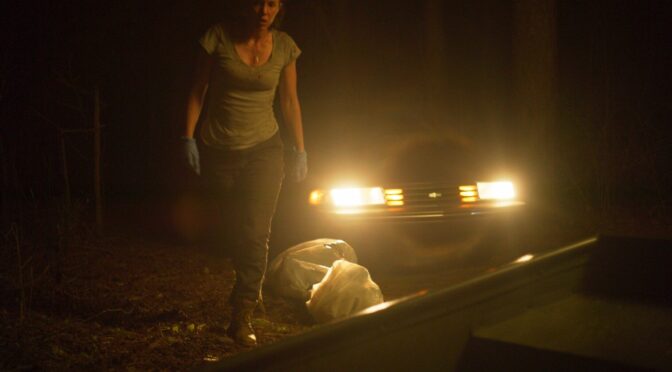 ‘Why don’t they call the police?’ is a question that should hang above every crime writer’s desk, as an aid to the suspension of disbelief. In the case of Leigh Tiller (Bethany Anne Lind) the lead character in Matthew Pope’s accomplished and compelling first feature, it’s asked more than once, but the answer is ever more complicated as the story is driven along at a cracking pace to an inevitable bloody conclusion.

Blood is where everything starts, seeping under the body of a battered-to-death intruder at Leigh’s run-down car repair shop where she lives with her teenage son Ryan (Jared Ivers) and without her criminal husband who’s away serving time. Ryan is already in trouble, on probation after blinding a kid who was bullying him, and seems to be heading in the same direction as his old man. Calling the cops won’t exactly help the family cause, reasons Leigh, wrapping up the body and bundling it into a boat, then heading out on a lake to dispose of the evidence starting with a heavy blood-stained spanner.

But dumping the body is a different matter and after picking up a ‘Where are you?’ message on his mobile from the victim’s girlfriend, Leigh finds she can’t do it. Instead, she checks out where he lived (a white-trash trailer park) before leaving the body in an outhouse and a note of apology in the mailbox. A fatal mistake we sense, or as Leigh’s bad-cop father Richard (a reliably excellent performance by Will Patton) puts it as things spiral out of control, ‘yet another shitty decision which is why we’re here’.

Leigh has been trying to protect Ryan from associating with his grandfather and in occasional flashbacks (the only times Bethany Anne Lind isn’t on screen) we gather that Richard’s redneck trigger-happy attitude led him to cross the line more than once when the young Leigh was out with him in the patrol car. Caught between her conscience and her escalating missteps (not to mention her increasing drug dependence), Leigh can only turn for protection to the long-suffering Rey (Jimmy Gonzales). The straightforward good nature of the garage mechanic is sorely tested as he’s dragged into this doomed family saga, the title of the movie becoming increasingly relevant.

Running at 83 minutes, BLOOD ON HER NAME is perfect film noir length, and not a moment of screen time or inch of footage is wasted. Leigh’s actions speak louder than Matthew Pope and co-writer Don M. Thompson’s words; she delivers a dominant and emotionally powerful performance: the audience (even taking into account every ‘shitty decision’) is always rooting for her. Pope’s cast and crew, from Brooke Blair and Will Blair’s spare score to cinematographer Matthew Rogers’s bleak/beautiful Georgia badlands, are also working from the same page.

BLOOD ON HER NAME deserves to be mentioned in the same breath as Jeremy Saulnier’s BLUE RUIN and indeed Jordan Peele’s GET OUT as a bloody melodrama made by a new director expertly flexing his movie muscles.