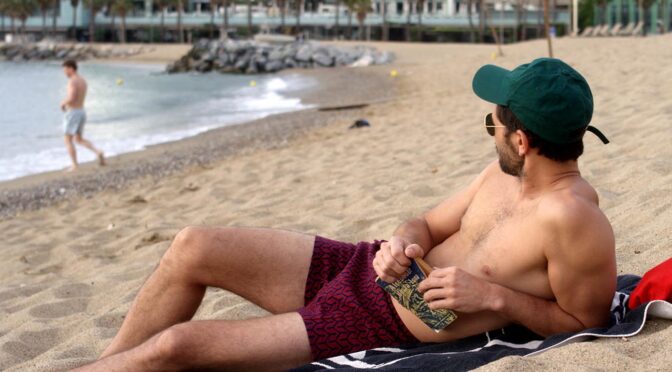 The fantasy of your life is also deeply a part of the life you actually lead. This idea is understood, played with, and ultimately outdone by Lucio Castro’s debut feature, END OF THE CENTURY, which begins as a variation upon José Luis Guerín’s IN THE CITY OF SYLVIA combined with Andrew Haigh’s WEEKEND, before developing into something approximating a queer CERTIFIED COPY.

In Barcelona, handsome, floppy-haired Ocho (Juan Barberini) walks around the streets, looks at buildings, sets up shop in an undecorated Airbnb, masturbates, goes to the beach, and reads. He’s alone, but he seems content in his solitude, carrying himself with easy confidence. He spends a good deal of time watching people from his balcony (hence the IN THE CITY OF SYLVIA nod). A passerby takes his interest. He spots the same stranger on the beach the next day: the two men are clearly aware of each other but don’t say anything. The other man, Javi (Ramon Pujol), goes for a swim, and Ocho joins. Still, no words are spoken. Both exit the water. Javi drives away on a scooter.

During another round of people-watching, Ocho sees the alluring Javi walking by, and says the first word of the film after ten minutes. “Kiss!” These letters are emblazoned on Javi’s t-shirt, but it’s also an effective come on. Ocho invites him up to the apartment, and the two share a halting introductory chat over sipped beers. Javi lives in Berlin, where he directs a children’s TV-show; Ocho is a poet living in America. “A poet in New York,” Javi comments, referencing the queer Spanish poet Federico García Lorca’s collection of the same name. Ocho nervously but quickly goes in for a kiss, and begins speeding up proceedings before Javi checks him, amiably telling him to slow down: that frankness carries over in the sex scene which follows. Ocho is ready to instigate, but neither has a condom, so Javi insists Ocho go to a nearby shop and buy one. He does.

After some fulfilling sex, the two part ways and meet up some time later, and a film which began with prolonged silence has transformed into a film of extended conversations; like the one that closes the first section, in which the two men share a bottle of wine, the Barcelona skyline their company but for each other. Key details emerge before Castro cuts suddenly to black. Ocho recently ended a twenty-year relationship; Javi is married and has a young daughter. Ocho mentions that Javi seems familiar; he feels like the pair have met before. Javi tells him that they have.

Castro’s narrative is slippery is an exciting way. In fact, it’s been aptly described already by one of the characters. When Javi asks why Ocho didn’t come over after swimming, Ocho shrugs, “It’s like a chess game.”

It’s both that and something much more complicated. After the cut to black, the film traverses back two decades to 1999 and reveals how the pair really met. How, and what follows, shouldn’t be divulged here, except to say that Castro’s play with time is revealing itself slowly but surely to revel in magnificent contradictions. (It’s twenty years before their first meeting, but Ocho has grey hair in his beard, and he’s holding the same book he was reading on the beach years later.) The patiently, gorgeously staged conversation, which frames the flashback, with the abundant brilliance of the lilac horizon behind them, is returned to, and the film sets off again on an extremely moving final passage.

During the flashback, Castro has words from Close to the Knives, a memoir of artist-activist David Wojnarowicz, appear on screen as Ocho reads them: “If I could find a way to remain forever in transition, I could remain in a state of perpetual freedom.” The film is, in a way, 84 minutes of transitional space: catapulting between possible stories, it analyses anxieties and desires, considers how things might have ended up differently. With its constantly engaging performances, beautiful images, and hints at high-concept time-play, END OF THE CENTURY is concerned with the potentially devastating distance between the memory of what happened and what could have happened, the unclosable gap between what is and what could be.