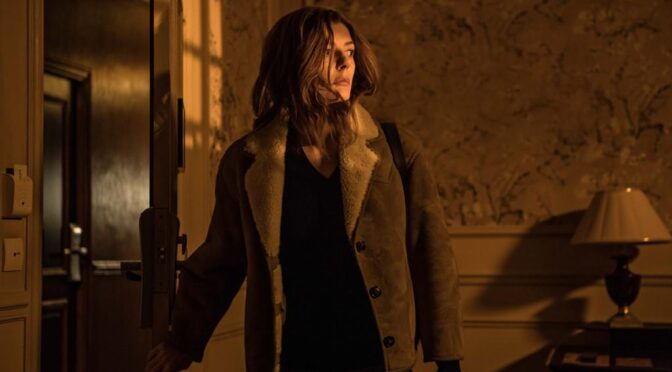 Christophe Honoré’s latest fairground whirl of a film, ON A MAGICAL NIGHT, is a liberating and comedic tale about fading romance and revisiting the past. Teaming with a stellar casting of Chiara Mastroianni and Benjamin Biolay as the current day Maria and Richard, joined by Vincent Lacoste as young Richard and his piano teacher Irène, played by Camille Cottin: the atmosphere is constantly buzzing.

The opening scene is quirky and amusing, seeing a flustered and impatient Maria barge out of her student’s bedroom, after tiring of his attempts to send his girlfriend away while she hides naked wrapped in a curtain. She maintains class and sniping sarcasm, giving the impression her infidelities are perfectly natural; a moral theme that is cemented throughout the film. After arriving home and flicking through her current law cases, her lover sends a series of texts that her husband Richard sits reading and later confronts her. They casually mull over her past affairs, both appearing tired of each other and she eventually heads over the road to a hotel; and ends up in Room 212 which faces directly into her home. Thus begins a barrage of ghosts from lovers, friends and foes of the past into the room, which centres around Maria and young Richard reflecting on their early romance before they fall into bed together. In addition, Irène remains a crucial figure due to her relationship with Richard when he was her student, and the impact this had on the couple through the years.

The age-old ‘what if’ question about decision made in your past, is teased around under the Parisian street lamps at night, and plays upon the lips of Maria as if it is a daring proposition, rather than a normal mid-life crisis of questioning your husband and marriage. However, it unusual and curious being able to visually observe your old life from across the street, the physical distance metaphorically displaying the distance between her and Richard. It is cruel in many ways, to be able to watch your partner emotionally deal with the revelation of an affair, without being present to take the blame. The imaginary spectres of them in their twenties feel strained in many ways as if this is her excuse as to why the relationship broke down. The film chips at the crevices between the pair, with time and age presenting themselves as the main culprits. Younger Richard concurs: ‘Everything has its explanation to serve your well-being’ as he chastises her behaviour of running around sleeping with students in an attempt to revive her youth. She continuously digs through the memories of their younger selves and past relationships, hoping these fictitious conversations can compensate for her fear of asking Richard, and asking herself, the hard questions. Room 212 becomes quite crowded after a while, which evidently suggests there is no singular architect in all of this.

“The film chips at the crevices between the pair, with time and age presenting themselves as the main culprits”

Chiara Mastroianni is delightfully humorous, her no-nonsense attitude and flippancy feel dually careless and assertive. Her sexual prowess is all around, glances at her lovers on the street as she strides across town, and casually glazes over her affair as if it is an ‘extra-marital’ activity. Her slight downfall is the reflection on her past appears almost exhausting, as if she does not have the time to sit and process all that has passed, but in many ways, this is an easier alternative than accepting her responsibility in the matter. There is interesting claustrophobia that confronts both characters and audience, with the primary settings resting between the hotel room and the couples’ apartment – there is no escape from the subject at hand. This can feel exhaustive at times, but the sharp editing and flow of new characters keep the pace fresh and engaging.

There are many references back to how people believe that the idea of love is the same as being in love, struggling to find differentiation in the moment, with it only becoming clear in retrospect. The way the film looks back on her sexual history is intricate and insightful, and she even remains stoic when she walks in from the balcony to find all her previous lovers, many of them young gentlemen, sat on her hotel bed curiously watching. From the discomfort of a mother’s scathing amusement of her daughter’s infidelities to the presence of Richard’s music teacher being an unspoken topic from their younger days, only by looking back can you comprehend what parts of your life you want to move forward with. Also, the fact half of these people are stark naked or parading around in bedsheets, in various stages of copulation on many occasions, feels like a liberating space to talk about sex and attraction. It is an indulgent concept, to imagine all your doubts finding resolve from connecting with your past.

“The fact half of these people are stark naked or parading around in bedsheets, in various stages of copulation on many occasions, feels like a liberating space to talk about sex and attraction”

The last few scenes go from amusing screwball to just plain bizarre. On the backdrop of Take That’s Could It Be Magic, as their marital home is licked with flames, in many ways, it seems deconstructive of all the emotional reconciliation the pair have just endured. It doesn’t go as far as having Maria run into the snow in her underwear, but in many ways that might have been a more fitting end. It feels very much one-sided, favouring Maria’s way of contemplating the past and is furthermore developed as a person by the credits, while Richard feels to have been left unfairly dangling in limbo.

ON A MAGICAL NIGHT is dizzying at times, constantly throwing people into the mixture to explore romantic possibilities, making one want to shut the hotel door on them all. It is intentionally overbearing, and is very much a film that deserves a collective viewing for enjoyment, and would be a rather more profound viewing if you were on your own. One thing is for sure, there would definitely be a high mini-bar bill if we all went through this process to reflect on our lives.