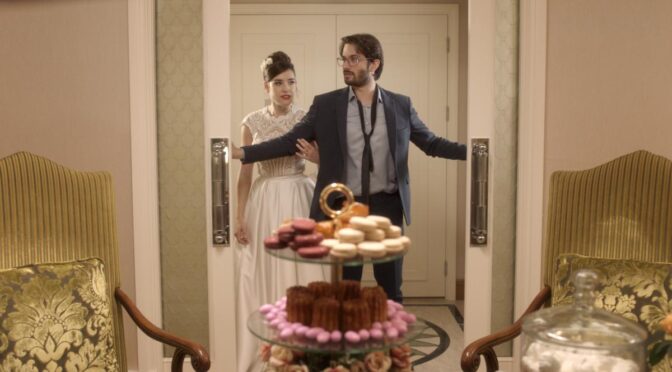 Talya Lavie won the Nora Ephron Prize at the 2014 Tribeca Film Festival for her first feature, ZERO MOTIVATION, so it’s appropriate for her to follow up with an Ephron-esque screwball romantic comedy. But HONEYMOOD stands apart from other entries in the genre with its dark edge, its sense of the absurd and fantastic, and empathy for the film’s flawed, imperfect characters.

It’s Noam (Ran Danker) and Eleanor’s (Avigail Harari) wedding night. As they admire their luxury bridal suite and presents from their wedding guests, they discover an envelope from Noam’s ex-girlfriend containing money and a ring. Eleanor is determined to get to the bottom of this unusual wedding gift from an ex. To restore their state of wedded bliss, the couple journey into Jerusalem at night, encountering former lovers, street cleaners, domineering in-laws, partying students, and a group of handsome bodyguards.

Lavie’s excellent script and a strong sense of humour propel HONEYMOOD. The film has a wry sense of self-awareness and irony that is frequently hilarious and never tips over into cynicism. Eleanor is particularly delightful with great lines like “Never talk about the weather with anyone other than your grandmother” and, at one point, an indignant “I am the wedding!”.

HONEYMOOD is superficially similar to other films which follow characters over one night in a bustling city like BEFORE SUNRISE or AFTER HOURS. But HONEYMOOD distinguishes itself with a well-developed sense of absurdity acknowledging the surreal imagery of running through Jerusalem in full wedding attire to find an ex-girlfriend while carrying a Roomba.

As the film continues and the couple undertakes their separate journeys through the city streets, this absurdity tips over into fantasia and the film starts to resemble the dream-like atmosphere of EYES WIDE SHUT where the audience isn’t sure which parts are real and which fantasy. Noam encounters someone who doesn’t seem quite real while Eleanor launches into a dream ballet. Like A Christmas Carol, the night leads them to confront their past in the form of ex-partners, their present in the form of family dynamics, and their impending future together.

Despite the film’s absurdity and the city’s dream-like atmosphere, the film is grounded by its heart and empathy. Though the sleazy ex-boyfriend and the disapproving mother-in-law characters do threaten to tip into caricature, Lavie takes care to present the humanity and shared connections of her characters. The newly-weds themselves are at the core of this and Lavie’s writing and directing is aided by terrific central performances from Ran Danker and Avigail Harari. They manage to balance the film’s humour against the human drama in a way that keeps the film from the Kubrickian detachment of EYES WIDE SHUT. Noam and Eleanor are very different people – he is quiet and calm, and she is adventurous and emotional. However, the film strongly conveys their acceptance of one another as imperfect and flawed people who nonetheless love each other and want to make the surreal journey of marriage together.